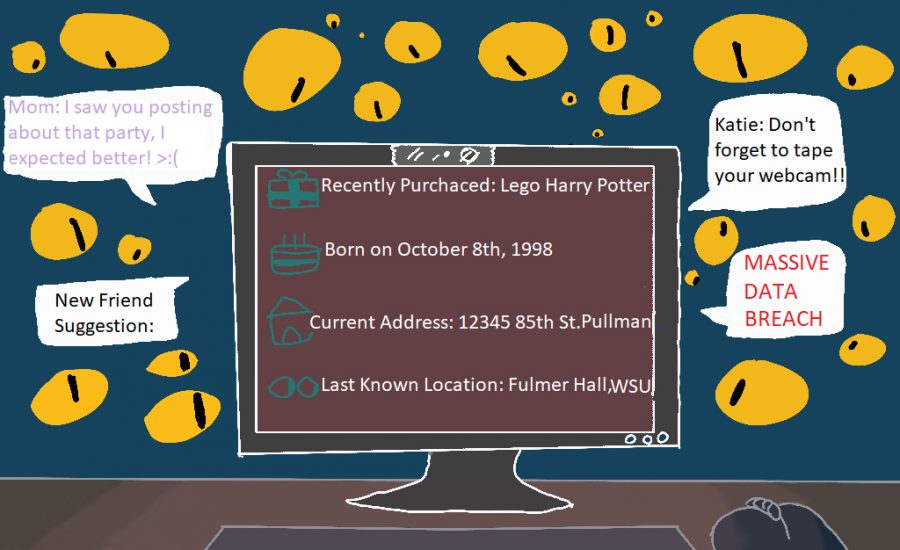 Though the internet has become an integral part of many people’s daily life, seemingly innocent websites often share information. It’s important to pay attention. If you’re on a free site where they’re not selling you anything ... chances are, you’re the product.

That phrase provokes a range of emotions among Americans, from nihilism to disbelief to optimism. Regardless of your gut reaction, the value we have come to know and love is an outdated concept. It has been for some time because of one factor: technology.

The meteoric expansion of the tech industry, from Apple to Google to Facebook, has come with demonstrable benefits. We’re more connected. We’re more socially aware. News can travel faster. Life-saving tech has gotten faster, cheaper and better. However, for every Apple Event (three cameras, anyone?) there’s an incredible decrease to consumer privacy.

“We’re in this state where big tech companies collect data on people, and they use that data to make their applications more attractive, and that makes the service better, “ said Adam Hahn, WSU professor of computer science, with a focus on cyber and network security. “That makes you want to spend more time on the app, which gives them more data on you. It’s kind of a feedback loop.”

Every time a person logs into Facebook, Instagram or one of thousands of other sites, millions of pieces of data are submitted to the site. Your location, time and device, among others, are extracted by the website (or app), supposedly to provide you with better ads or better suggestions related to your recent purchases.

Whatever the justification, that website now has your data. And, beyond a few countermeasures, there’s nothing you can do about it.

Another side effect of the rapid expansion of the tech industry is the thriving data brokerage industry, whose highest-paid firms can gross over $800 million a year, just from buying and selling your data to the highest bidder.

In many cases, your data may be in the hands of 10 or 20 different websites, most of which you’ve never visited.

One example of this is the Equifax data breach of 2017, when more than 143 million consumers had their information stolen. Due to mishandling of data by the company, hackers were able to steal Social Security numbers, credit card info and bank statements from millions of individuals, most of whom had no idea Equifax had their information.

“You never gave them your data. They bought it from somebody else,” Hahn said. “And they didn’t adequately protect it. Someone hacked in and stole it, and you can’t do anything about it.”

“These things are listening all the time,” Hahn said. “All these intelligent devices you have at home are collecting data on you.”

The tendency to assume smart home devices are listening on our command is ludicrously false, given the revelations that have come out about the Google Home, Alexa devices and the less-than-stellar record when it comes to user privacy.

These corporate data-gathering habits aren’t new. Independent bloggers and cybersecurity activists have been screaming about the grim reality for years. Yet even when faced with overwhelming evidence that their privacy is teetering on the edge of nonexistent, the general public consistently opts for expansion of technology into their everyday lives.

The rate is exponential. The danger is incredibly real. Unless we make a tangible effort to reverse the trend of corporate and governmental data extraction, there will not be a single facet of our lives that remains secret and private.

What can we do? Are we resigned to a future where privacy is a relic of the 20th century, and big tech firms inevitably start reading our thoughts? If we’re going to be under constant surveillance, isn’t drone-delivered toilet paper adequate compensation? Will we be smoked, like a delicious brisket, on Mark Zuckerberg’s grill of corporate data extraction?

Not quite, Hahn said. The consumer has tools at their disposal to protect some of their data. Search engines such as DuckDuckGo and email providers such as Thunderbird refrain from collecting personal data, allowing individuals to sleep a little more soundly.

The consumer (that’s you) must be the final word when it comes to personal privacy. Stop feeding into the trend of corporate advancement at the expense of individual rights.

It’s imperative that we take a stand against Big Tech, by voting with our cash and choosing to buy products from companies that prioritize privacy. With coordinated consumer knowledge and effort, we can help reverse the tide of unlawful information gathering and take back our personal data.

Some may accuse me of fetishizing privacy, but I simply want to protect one of our most fundamental human rights: the right to tell Larry Ellison to stay the hell out of my inbox. There are emails in there. From girls.