Bennett is back for Cougars 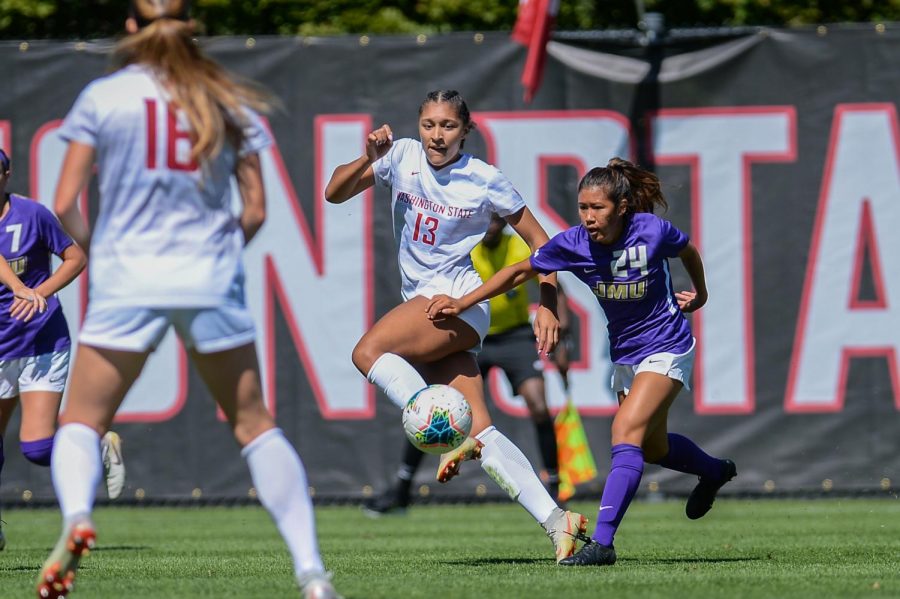 Junior forward Elyse Bennett passes the ball to a teammate during the match against James Madison University, on Sept. 1 at the Lower Soccer Field.

Elyse Bennett came back this season ready to play. After tearing her ACL for the second time in a game against Arizona State University last season, she knew she wouldn’t play again until this fall.

She missed the feeling of being around the team and wants to make a run in the NCAA tournament this season, Bennett said.

The last full year she played for WSU was her freshman year. It was special because it was the first year the team made the Sweet Sixteen in the NCAA tournament, she said.

It was also the first year she came back from tearing her ACL. She tore her ACL once before during her senior year of high school.

She joined the team excited to play at WSU as a freshman, but when she tore it again last year she knew the struggle she would face recovering, Bennett said.

“You wouldn’t really get this atmosphere anywhere else in terms of the crowd and the band and everyone that comes out to support us,” she said. “Sports here is the number one thing, the number one source of entertainment.”

This season, the WSU women’s soccer team roster is filled with offensive players. Returning forwards like seniors Morgan Weaver and Katie Jones, junior Makamae Gomera-Stevens and freshmen Skye McMillon and Mackenzie Frimpong-Ellertson round out a strong frontline with Bennett.

“This year we’ve compared to the air-raid offense of football to keep on scoring,” Bennett said.

In the past the team relied heavily on defense to keep the team in the game, but the Cougars want to change that this year, she said.

“Like in the game against Gonzaga, we had 90 minutes of no goals. We had to find a way to win,” she said.

That’s what Bennett’s teammates like best about her — her intense drive to win.

“[I like] having someone that you know is going to work no matter what the circumstances are and wants to win just as bad as you do, if you’re on the field or off,” sophomore defender Kelis Barton said.

The Cougars’ non-conference games result in scores like 4-0 against Seattle University, 6-0 against University of Montana and 6-3 against James Madison University. However, soon they will enter Pac-12 play against top ranked teams like No. 2 Stanford, No. 3 Southern California and No. 5 University of California. Being able to score against those teams is important, Bennett said.

In her mind, the team is stronger than last year or the year before. Even on their worst nights, the team still works to find a way to win, Bennett said.

The junior forward biology major was always an athlete. As a child she played soccer, volleyball, basketball, competed in track and field and was always active.

In high school she made the decision to pursue soccer. She only played one season at her high school before fully committing to her club soccer team, which required her to drive two hours each way to every practice.

For a while she considered being a competitive track athlete but chose soccer for the comradery.

“I like the fact that you have to come together and work as one unit to achieve a common goal,” Bennett said. “It’s fun and it’s not all about individual success.”