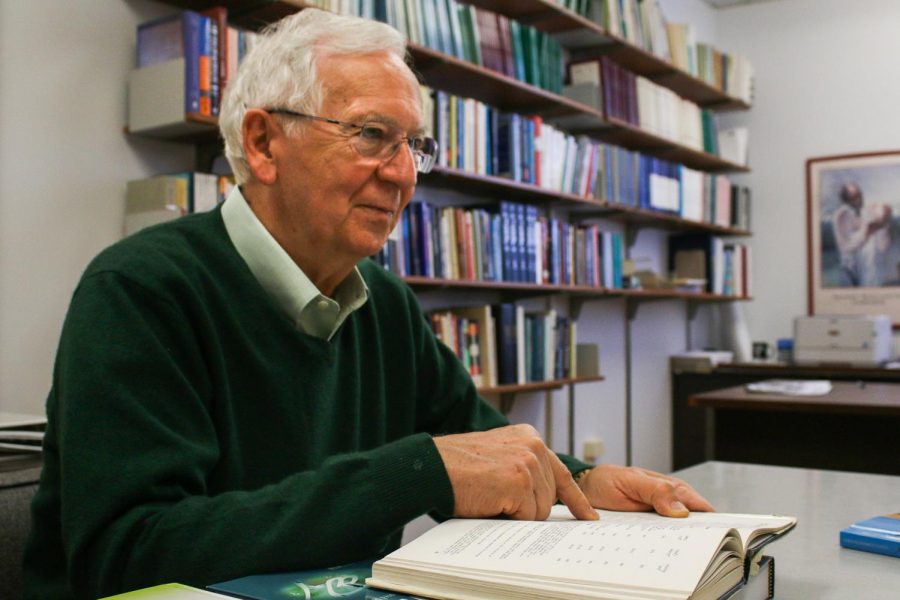 Regents Professor Don Dillman explains the progession of his books, and how surveys have affected the world on Thursday at Wilson-Short Hall. Dillman’s first book, Mail And Telephone Surveys: The Total Design Method, was first published in the 70’s and continued to sell large amounts of copies into the 90’s, prompting him to write future editions.

Regents Professor Don Dillman said he witnessed the evolution of technology during his time at WSU. Today marks the 50th anniversary of Dillman’s employment at WSU.

Dillman first came to WSU in 1969. He began as an assistant professor for the rural sociology and sociology departments. He said his first class had about 180 students.

Now, Dillman said he only teaches survey methodology which has about 30 to 35 graduate students.

“When I came here, I was given a manual typewriter to work with. There were no fax machines. The computer was in an air-conditioned building elsewhere on campus. We did not have personal computers,” he said. “The internet had not been developed, so there was no email.”

During this time, Dillman said surveys were conducted in face-to-face interviews, over the telephone or through the mail.

He said this changed in the 1990s. He and his team were developing internet surveys, but not enough people had fully adopted the internet.

“It wasn’t working very well, because so many people weren’t on it. Others objected because of [concerns about] viruses and malware,” he said.

In 2002, Dillman said he conducted a student experience survey on campus in which nearly 90 percent of the student population had desktops.

Dillman said the future of surveys may be centered around smartphones.

Monica Johnson, professor and department chair for the sociology department, said she has known Dillman for 17 years.

“He and his wife Joy hosted a reception the day of my interview at their home,” she said. “My first impression is that he was generous and warm – a nice person beyond the reputation.”

Johnson said Dillman is a “legend” in the sociology field. Dillman has published several books on survey design and survey results. His first book “Mail and Telephone Surveys: The Total Design Method” was published in 1978.

“It was exciting for me to meet him after reading and seeing his name so many times during my own training,” she said.

Johnson said Dillman also published a narrative in 1980 called “After Mount St. Helens: Seven Gray Days in May” describing how the WSU campus was affected by the eruption of Mount St. Helens.

She said she began working alongside him in fall 2002.

“He’s definitely been a mentor for me. I don’t think I knew it when I first met him, but over the years I have gone to him a number of times to seek his counsel on opportunities that I was faced with,” she said.

Johnson said talking through ideas with Dillman are some of her favorite memories.

“We sat there and we brainstormed and we talked about all the different parts that would have to be figured out, and it was really engaging,” she said. “He was a great partner in that process.”

Johnson said Dillman not only brings his expertise of survey methodology to the sociology department, but he has also been a mentor to several graduate students, most of whom have successful professional careers.

“He … is the designer of a method to getting quality survey response,” she said. “That is unparalleled.”

“When we started the first telephone surveys, we used dial phones. They were noisy and they were slow because you had to wait,” Dillman said.

Dillman said he hired men and women, but even after putting sound-absorbing materials in the lab to lessen background noise, he found men were much harder to understand while on the phone.

“This is kind of doing research on the fly. You do something to try new technology, but the telephone quality was so much different then.”

Johnson said Dillman created POL, which is located in Cleveland Hall, after being asked to by then-President Glenn Terrell.

“When President Terrell was faced with meeting data collection at a critical time in WSU history, Don was the only one who had any experience ever doing a telephone survey at the time,” Johnson said. “The subsequent survey research that was done out of that center really put WSU on the map.”

Dillman said he has done multiple surveys on campus, some of which really launched his career.

In 1978, Butch, the live cougar mascot, died. Dillman said WSU had planned to acquire a new live mascot to replace Butch. Dillman and his team conducted a survey, and they found that the majority of students did not want a new live mascot. This is commonly referred to as “Butchgate.”

“He’s contributed so much to our department and to campus,” Johnson said. “And 50 years is such a remarkable achievement. It didn’t seem like we could pass it up to say thank you to him.”

The department of sociology and the college of arts and sciences are hosting an anniversary celebration for Dillman at 5 p.m. on Monday at the Lewis Alumni Center, which will be open to the public.