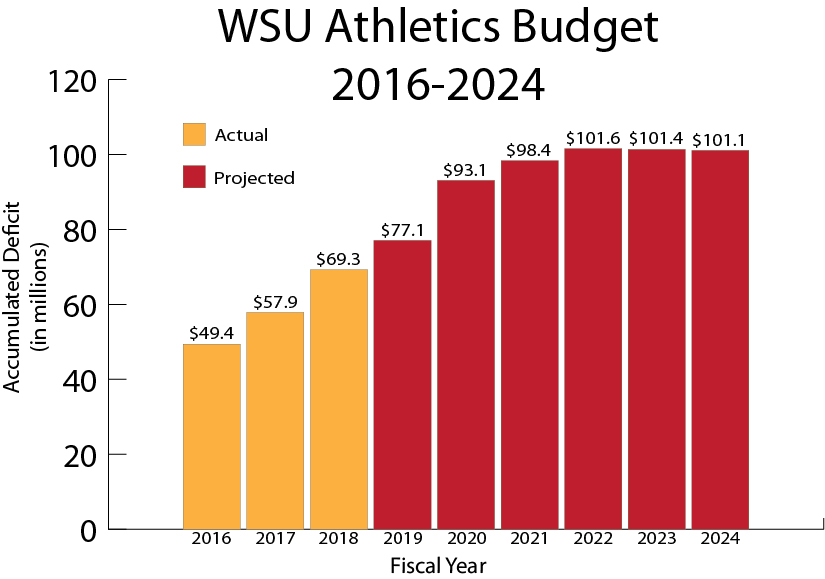 WSU’s Athletics department is expected to increase its accumulated deficit in the next few years, but officials say they hope to reduce it once the deficit reaches the $100 million mark.

The WSU Athletics budget is still expected to reach over $100 million in debt by fiscal year 2022. This is the largest the debt has been since the department began deficit spending in 2012.

During the WSU Board of Regents meeting on Thursday, Stacy Pearson, vice president for finance and administration, and Matt Kleffner, chief financial officer of athletics, updated the Finance and Compliance Committee about the state of the athletics budget.

“We are projecting getting up to 100 million on that overall accumulated deficit that then after that when they’re at breakeven, we’ll make efforts to reduce that,” Pearson said to the committee.

After the summer meeting, the athletic department continued to make money in the fiscal year, Pearson said. The department made budget projections about their yearly revenue before they received it.

The majority of this deficit growth, $ 6.7 million, is from the new baseball complex, Pearson said.

The budget from the past three years and projected budget until 2024 will continue to increase their spending and revenue. The athletic department expects an increase in ticket sales of $4 million by 2023 from 2020.

The department expects to see an increase in contributions from the money put into fundraising and marketing, Pearson said.

There is also a steady increase from media rights planned with networks through contracts between the Pac-12 conference, ABC, and FOX, Kleffner said to the committee.

“[The Athletics budget deficit] clearly creates a significant financial risk to the WSU’s overall fiscal health that requires continuous oversight until deficit spending is eliminated,” Pearson wrote in a memo presented to the committee.

In the future, Pearson said she wants to focus on “anticipated events” like a coaching change.