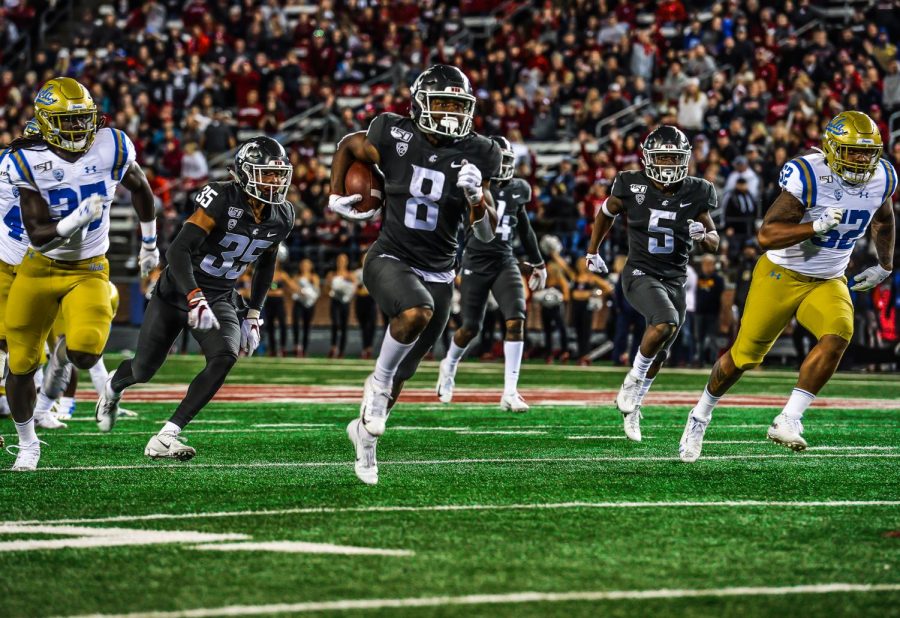 Redshirt senior, Easop Winston Jr., middle, carries the ball down the field while being chased after during the game against UCLA on Saturday night in Martin Stadium.

Redshirt senior wide receiver Easop Winston Jr. is our Athlete of the Week for his four touchdowns and 114 yards in WSU football’s loss to UCLA Saturday.

Despite the team loss to the unranked UCLA, the offense still put up big numbers, mostly due to the “Air Raid” offensive scheme that head coach Mike Leach preaches.

This was no exception for Winston on Saturday, grabbing his four touchdowns from redshirt senior quarterback Anthony Gordon, who threw a Pac-12 record nine touchdowns against UCLA.

Gordon and Winston have a history together, before WSU, as they played together at the City College of San Francisco.

The Pac-12 record for receiving touchdowns in a single season is 17, and this performance by Winston puts him at eight on the season before the halfway point of the season. Winston is certainly on pace for that record.

Winston’s four touchdowns doubles his season total before the game, but only shows that the connection between Winston and Gordon is one braced with trust.

WSU moves on to their second away game of the season, traveling to Salt Lake City to challenge No. 19 Utah.

The situation WSU is in mirrors that of last season, as they took a road loss to USC and came back to win a big home game against Utah during week 5.

Winston and the WSU offense will be hungry for another big game as they take on Utah on Saturday. The game can be viewed on FS1 from Rice-Eccles Stadium starting at 7 p.m.