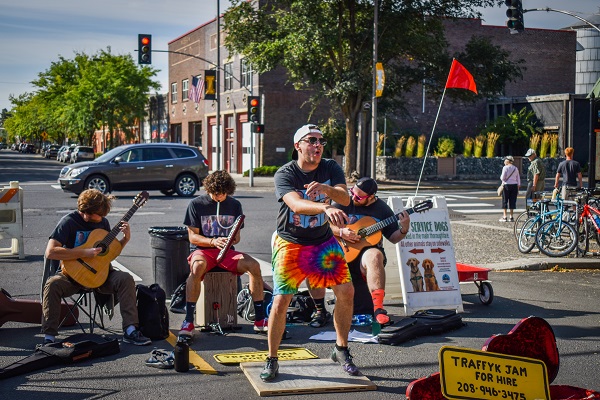 “Musically, we can communicate with [our tap dancer] through his tap board. Theatrically, he can engage with the audience,” percussionist Brantley Bacon said.

“We threw ‘Traffyk Jam’ out there because of the scene of musicians sitting out in the street and playing music,” said Moscow resident Connor Bruce, the musician who started the group.

Bruce began playing at the market in May 2017 and soon after brought in Bobby Meador on guitar and Brantley Bacon on percussion. Tap dancer Tim Malm made their market ensemble complete when he joined in late June 2017.

“Collectively our appeal is the strange, not-thought-about grouping of instruments,” Bruce said.

The band members play covers using eight-string guitars, melodicas and other unusual instruments. Malm accompanies the group, and his tap music serves as a sort of percussion instrument, Bruce said.

“Musically, we can communicate with [Malm] through his tap board,” Bacon said. “Theatrically, he can engage with the audience.”

The group exclusively played at the farmers market but now does performances at housewarming parties, weddings, banquets and other private events, Bruce said.

“We can chameleon really well,” Bacon said. “We can find a way to fit any situation.”

The band plays songs that will capture their audience’s attention because they have a very limited window with people who are walking by quickly at the market, Bacon said.

“We’re truly best in our natural habitat of acoustic and close to the audience,” Bacon said.

The band practices the Friday nights before the farmers market, but they try to avoid refining their pieces too much, Meador said.

“We still want to have that jam element,” Meador said. “The less confident we feel, the more likely we’re able to improvise and make something really special.”

The band plays songs ranging from the likes of “The Final Countdown” by Europe all the way to Disney’s “The Little Mermaid” soundtrack, Bruce said.

“The biggest thing that makes us unique is that we’re kind of a meme band,” Meador said.

Members of Traffyk Jam tailor their covers to whoever is closest while they are performing. For instance, if someone in a Metallica shirt walks by, they change their style or start playing one of their classic songs, Bacon said.

“[We take] songs that people know, keeping the element that makes it that song, and then just completely destroy everything else about it,” Bacon said.

The musicians can take their usual melodies and turn them into something suitable for their current performance, even an Oktoberfest party when they had never played polka music before.

“We turned Lady Gaga and Katy Perry and these stupid pop hits, put an ‘oompa’ behind it and made it into a polka jam,” Bacon said.

Traffyk Jam can be seen playing at the Moscow Farmers Market most Saturdays during the summer and fall.