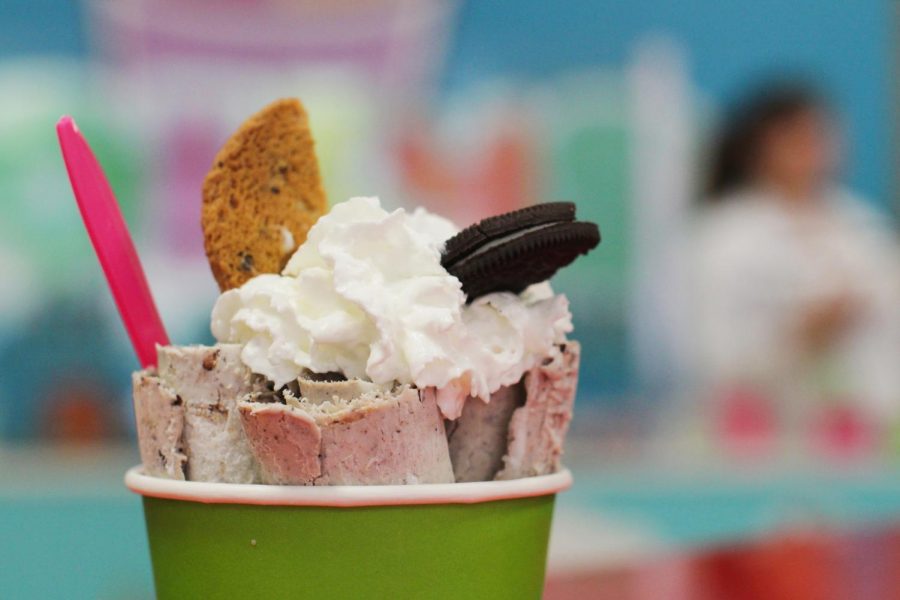 On her first visit to Rollys ice cream parlor in downtown Pullman, 11-year-old Claire McEwen knew what she wanted right away. Cookie Monster, she said, is her nickname, so she had to get it when she saw the flavor on the menu.

“I love Oreos,” she said, “but sometimes I can be a little monster.”

She and her mother Deidrea Power-McEwen came into the parlor about a half-hour after it opened at noon Tuesday. It was their first time visiting. Power-McEwen said they had considered coming to Rollys for a while, and now seemed like a good time.

“[It’s a] little treat in the middle of the day between two doctor’s appointments,” Power-McEwen said.

And Crystal Gayles has tried more than the average sweet treat flavors. Since all Rollys ice cream starts from the same base, it is possible to invent some unique flavors. Bleu cheese, cranberry and candied pecans, to be specific.

“I am weird, and I liked [the flavor],” Crystal Gayles said with a laugh. “Maybe other people might, I don’t know.”

She said if a food or drink item is closed, Rollys can turn it into ice cream. No liquor, she said, and no open packages. But if a customer brings in something like a closed bag of Hot Cheetos or Red Bull, they can roll it into ice cream.

She and her husband, co-owner Adrian Gayles, got the idea for Rollys after watching ice cream videos on YouTube. The rolling technique, she said, originated in Thailand and uses a cold metal surface called an ice pan.

Crystal Gayles demonstrated the process — with the standard Cookie Monster ingredients, not Hot Cheetos. She chopped up the tuxedo creme-filled cookies and chocolate chip cookies on the ice pan, set to negative 7 degrees Fahrenheit, then poured the cream base over it.

She mashed and smoothed the mixture into a flat rectangle before rolling it into tubes and topping it all with whipped cream.

After getting the business idea, practicing the technique and ordering the ice pan, Crystal Gayles and her husband started looking for locations in 2016. Finding a place was one thing; timing was another.

“What really pushed us to open was when Baskin-Robbins ended up closing,” she said.

The interior of the parlor features a painted mural of Candyland and cartoon characters racing to a sugary castle. Arcade machines beep and whirr under the classic rock humming over the speakers.

Looking at the colorful decor, it’s hard to imagine the flood that coursed through the building April 9.

On the first day of flooding, Crystal Gayles said, the water rose up waist-high. By the next day, an inch and a half of mud-coated the floor, and several appliances suffered water damage.

She created a GoFundMe campaign to replace damaged appliances, including the interior parts of the ice pan. Thanks to 23 donors with contributions between $5 and $795, the Rollys owners exceeded their $1,500 goal and reopened less than two months later, May 31 — just in time for summer.

“We certainly get a diverse customer base,” Crystal Gayles said. “More college students during the year, and […] more families and kids in the summertime.”

Crystal Gayles said she and her husband are thinking about opening a Rollys branch in Lewiston, Idaho. However, she estimated another six months until those plans can start gaining traction.

“It’s just a matter of really getting this [location] back up and going up to full speed,” she said.

Rollys sets a high bar for full-speed. The business opened Oct. 18, 2018 — one day after ESPN College GameDay arrived in Pullman for WSU’s football game against the University of Oregon. That also means the business’ one-year anniversary is coming up, accompanied by a Birthday Bash and two secret new flavors making their way onto the menu.

The College GameDay rush gave Crystal Gayles and her husband the feedback they needed, both good and bad. She said the biggest complaint is that the ice cream can be pricey, but it comes down to maintaining quality and paying employees while still turning a profit.

“We could get it to the creamy consistency without having to roll it and serve it that way,” she said, “but that’s no fun.”