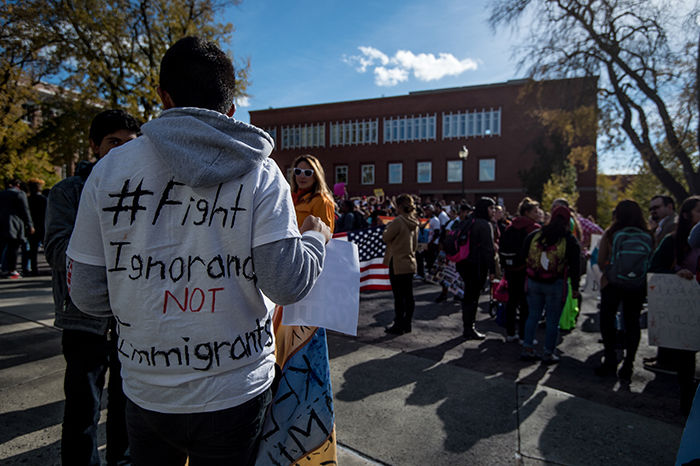 A student wears a shirt that reads “Fight ignorance not immigrants” at a counter-protest during the Trump wall demonstration on Oct. 19 on the Glenn Terrell Friendship Mall.

Since President Donald Trump issued an executive order banning immigrant and non-immigrant entry from seven countries with Muslim-majority populations on Friday, protests have erupted across the country and many officials have released statements declaring their stance on the order.

WSU President Kirk Schulz sent out an email on Monday morning expressing “deep concerns” about the order and support for the university’s international students, and encouraging them to avoid leaving the country.

“We are advising non-U.S. citizens and their families from the impacted countries to refrain from traveling outside the United States,” Schulz wrote in the email.

The ban, which will last at least 90 days, applies to Sudan, Syria, Somalia, Iraq, Iran, Yemen and Libya. Schulz stated in the email that he supports all members of the WSU community, “regardless of the country they call home.”

Schulz stated that the WSU administration is monitoring any developments to better understand how the executive order will affect the university’s community.

“We’re worried that they might not be able to come back,” he said.

Craig Lawson, communications director for the WSU Office of International Education, said that there are 136 students from the countries affected by this ban. There are zero students from Somalia, and the rest come from the other six countries.

These numbers are not exact, Lawson said, but they were the enrollment figures for fall 2016, which is the most current information available.

Some of the concerns Lawson’s office has heard came from students who need to leave the country for various reasons but fear they won’t be let back in.

The office is currently dealing with a couple situations in which students tried to get back into the country and were turned away at the airport, Lawson said.

“This is a moving target as the week goes on and maybe even beyond this week,” he said.

Lawson said for now, the office is working with students on a case-by-case basis.

“I think those are the concerns that we’ve heard so far,” he said. “I anticipate we’ll hear more in the coming days as people continue to ask us questions.”

Lawson noted the circumstances are still relatively new to the affected students, as the executive order came Friday night.

“This is the first time students have really had an opportunity to get in touch with people on our staff and ask questions,” he said. “So we’re trying to gather what are the most popular questions so that we can do a better job of answering everybody.”

The banned country from which the largest number of WSU students originate is Iran, with 96 students. Lawson said that right now, the office is getting questions from international students of many countries, not just the banned ones.

“Whether they are from Iran or China or any other country,” he said, “they are 96 international students that we’re here to serve, and we need to take care of them the best way that we can,” he said.

Lawson has heard from several professional organizations that this executive order may extend the amount of time it takes to get any type of travel documents, including passports.

“I think that’s common sense in a way,” he said. “I think that it’s an easy forecast to make if we’re spending more time looking at people.”

Lawson said he does not know if this will affect international student applications to the university for next year.

“We have 99 different countries here as far as students last fall,” he said. “Is it possible? Sure, but it’s also possible that we would have an uptick from a different country.”

While other world events have affected international student enrollment numbers, Lawson said he does not know of anything on this level happening before. He said it is too soon to tell whether there will be an increase or decrease in enrollment.

“Obviously we’ve dealt with nothing like this that I can think of,” Lawson said.

Editor’s note: This article has been revised to reflect that the ban will last at least 90 days.