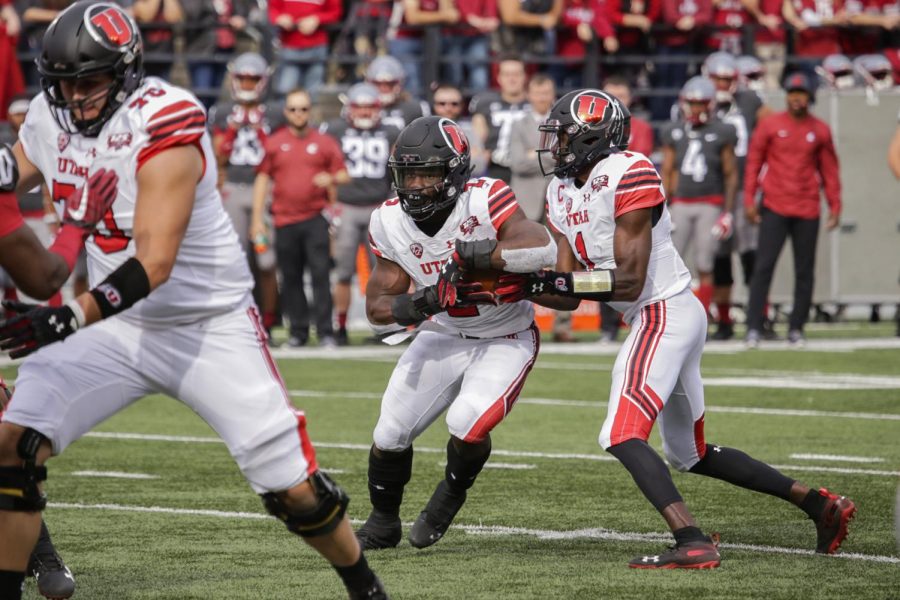 Then-junior Utah quarterback Tyler Huntley hands the ball off to then-junior running back Zack Moss during the game against WSU on Sept. 29 at Martin Stadium.

Every week, USA Today releases The AP Polls. During Week 4, with the amount of upsets, comebacks and surprises presented this past weekend, there was some serious movement but only below the top nine. Heading into this weekend, let’s catch up on why everyone is ranked where they are.

The top four, in order, Clemson, Alabama, Georgia and LSU, did not change at all. Ohio State deserved to surpass Oklahoma for the number 5 spot. Their offense is tough, but Ohio State needs to play someone who is actually a contender. Then their ranking could definitely change.

To round out the top 10, is Oklahoma at six, Auburn, Wisconsin shooting up five spots, Florida and then Notre Dame. The Fighting Irish were the notable team in the top 10 to drop more than a spot. Oklahoma had a bye so that’s fine. Wisconsin deserved to sneak in the top 10. They dominated Michigan in a 35-14 routing at home. Florida proved they don’t need Feleipe Franks against Tennessee and Auburn beat up Texas A&M at College Station.

Now comes the chaos, every team moved either up or down between 11 and 20. In order, the next five, 11 through 15, is Texas, Penn State, Oregon, Iowa and California. Oregon did look good against Stanford, which is what the analysts were expecting. However, California, with the biggest jump (eight spots), to number 15 only beat an okay SEC team, Ole Miss.

California is good, but barely scratching out a win against Ole Miss doesn’t make them better than 12 other teams in the top 25. Ole Miss just had bad time management at the end of the game. How does that mean that Cal is the 15th best team in the country?

In order, 16 through 20, belong to Boise State, University of Washington, Virginia, Utah and Michigan. Boise State looked good toward the end of their game against the Air Force. UW dominated BYU all game and Virginia looked okay against Old Dominion, but then got their act together.

Utah and Michigan deserve to fall this much. Utah is supposed to have the best defense in the Pac-12, and they went to Southern California and had 30 points put on them. Michigan has just looked bad in back-to-back weeks, beating Army in double overtime and then getting beat down by Wisconsin on the road.

To round out the rest of the top 25, the last five teams are, in order, Southern California, UCF, Texas A&M, Kansas State and Michigan State. USC came into the top 25 from being unranked and beat Utah at home, so it is right that they are in the top 25. UCF’s regular season winning streak ended when they traveled to Pittsburgh University and lost by 1, and because they are considered a Group of Five conference, the fall for them is inevitable.

Texas A&M is the only 2-loss team in the top 25, but when you lose to the number 1 team and number 8 team in the country, it can be seen as an interesting decision to leave them in, but they need to win to stay in. Kansas State and Michigan State both enter in the top 25 unranked after their wins this weekend, Kansas State being 3-0 and Michigan State coming back in after a devastating loss to Arizona State at home.

There were three teams that were dropped from the top 25 poll: WSU, Arizona State and TCU. All three teams lost at home when all of them were favored to win their respective games.