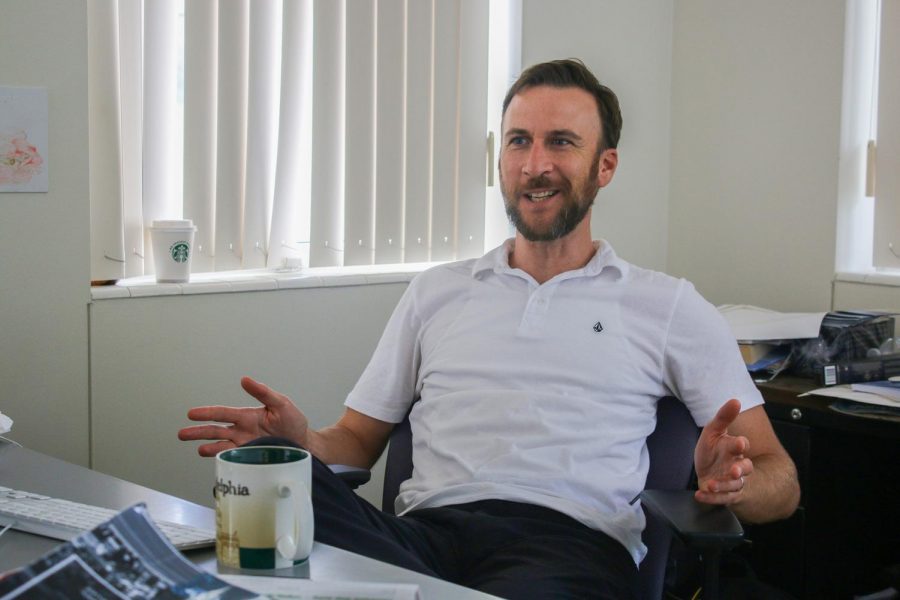 Ben Shors, journalism and media production clinical associate and professor, says the first magazine he ever read was Sports Illustrated. “What happens to those people who were involved in headlines years out,” Shors asks.

Ben Shors keeps his passion for teaching and reporting alive through his experiences at WSU. He co-directed a documentary and is currently the chair of the WSU Department of Journalism and Media Production.

Recently he co-directed “The Blackfeet Flood,” which is about one of the worst natural disasters in Montana history and its impact on the Native Americans in that area.

The documentary has already been shown in film festivals, such as Big Skys Film Festival, this year and will premiere on PBS in November. Shors said that he has always had an interest in “the long tale of journalism” and people’s personal stories.

“What happens to those people who were involved in headlines years out?” Shors said. “What’s the impact on their lives? How do they reflect on that with the space of time and memory?”

Shors said that future journalists should not aim to alienate people based on their different opinions and recommends people be as ethical and accountable for their work as possible.

“After a piece of journalism, you should be able to take that back to the person you produced the story about and be accountable to them,” Shors said. “That doesn’t mean it’s journalism that they always like.”

Shors was originally a biology major but was always interested in journalism and the news media, often reading magazines such as The New Yorker and The Atlantic as well as the works of John Updike and Ernest Hemingway.

Before he came to WSU, Shors started out as a health reporter for The Seattle Times before moving on to work for many different newspapers and traveling to multiple countries such as Panama, Germany and South Africa. Besides reporting, Shors also has experience in photography.

Shors serves as project manager for the Murrow News Service, a platform for students to turn their work into professional products for media outlets. The service operates as a way for students to explore new areas of journalism, build their portfolios and get an inside look into the professional world, Shors said.

“I think that’s the challenge,” Shors said. “Taking all these stories here and there and finding the connective tissue and saying, ‘This is the scope of my work.’”

He also manages the Olympia Bureau, an internship that allows Murrow students to go to Olympia with a weekly stipend to cover the state Legislature for professional media publications.

“I think we provide so many incredible opportunities for our students,” Shors said. “I’m confident in the education that we provide.”

For those currently studying or with an interest in journalism, Shors recommends they collect all types of stories even if they think it is not newsworthy because every story has value.

“Just acknowledging that everyone’s life has value and interest,” Shors said, “and that it’s up to us as journalists to seek that out and find it.”

As for the future, Shors wants to work more on rural populations and to focus on local people and the complexity of small-town living that the media often overlooks. On top of that, Shors wants to keep teaching and telling stories.

“Maybe by the end of my life, I’ll be able to tell a decent story to my grandkids,” Shors said.