Head to Head: The Daily Evergreen and The Daily Utah Chronicle 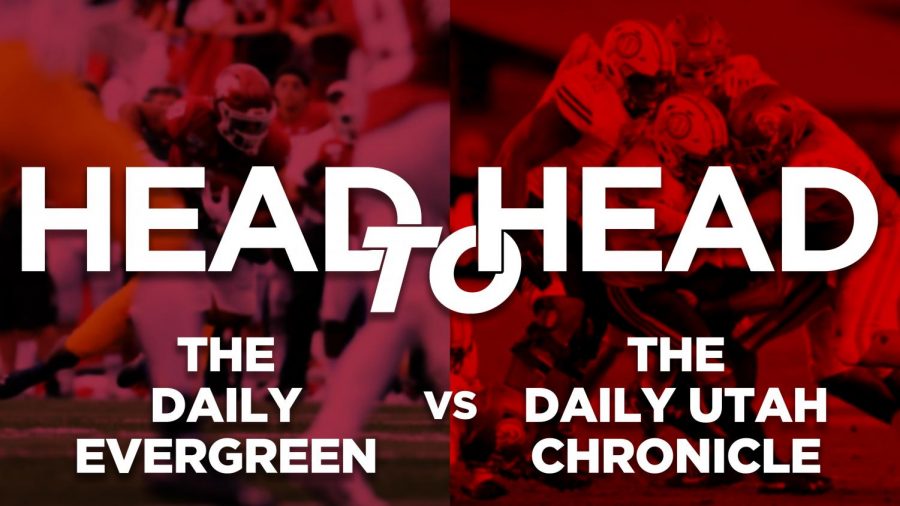 The Daily Evergreen and The Daily Utah Chronicle assistant sports editors asked each other questions Wednesday afternoon before Saturday’s football matchup.
Sammy Mora: Last year’s game was a shootout, are you hoping to see the same thing in this year’s game?
Grace Arnis: Yeah, that’d be nice. I think that this year the team is going in probably a little bit different because obviously with last week we have some things to work on but obviously you’d always hope to see that. I think that this year will be a little bit more difficult, I think it will be a more even matched than it was last year.
SM: Both teams are coming off disappointing losses, do you think that is going to change the way that the game is played?
GA: I totally think that both teams right now have something to prove and I think that is one of the ultimate motivators in football, when people don’t believe in you. I feel like the Cougs go everywhere with a chip on their shoulder, but I think this week they have a huge brick.

SM: Utah has established that they can run the ball as well as throw it, what is WSU going to need to do to make the team have to rely on one more than the other?
GA: WSU needs to all around on defense be stronger. The defense needs more coverage when it comes to being able to handle deep throws. Last week against UCLA we let way too many things by and I think if they are going to succeed this week against Utah they need to hunker down in all areas, not just one area. They need to be more tight, and better overall.

SM: Who on the WSU defense should Utah keep an eye out for?
GA: I think Jahad Woods is waiting. He is waiting for something and this would be the time for him to come out. He’s been known to have big interceptions and make some great tackles and I think now is the time he really needs to step up.

SM: What makes Anthony Gordon different from the other quarterback on the roster?
GA: It’s time spent in the program. Anthony Gordon knows Air Raid. He’s been here for three years, he found the sidelines a lot last year with Gardner Minshew. He really learned a lot from all those experiences, JUCO, here and really having to work his way up through the quarterback system here. I think he understands the offense better than a lot of other people. Also the kinda relaxed way he plays, he just seems like he is in his element when he is out there. The air raid is his game and that’s what makes him different. He knows this offense inside and out.

GA: Coming off last week’s loss what do you think needs to change in Utah’s game to pull off a win?
SM: Playing USC before playing Washington State was very beneficial for the team because they both [USC and WSU] have that air raid offense. Washington States is a lot more focused on the air raid than USC’s is but the biggest thing I took from that game is that our secondary play needs to be loads better than what it was last week. Julian Blackmon, Jaylon Johnson, Tereke Lewis and Josh Nurse were all getting beat on throws that usually they’re not getting beat on so I think that was the biggest thing. We also can’t put the entire game on Tyler Huntley’s back, we need to make sure our wide receivers are catching balls and that they have the opportunity to catch those balls. Our running backs played good without Zack Moss, and Devin Brumfield and Devontae Henry-Cole stepped up but we need to not put the game on Huntley’s shoulders, he’s only one man and he can only do so much.

GA: What do you think has changed about Utah’s offense this year?
SM: It’s our new offensive coordinator Andy Ludwig. He was in charge of the Utah offense one of the years we busted the BCS. He’s got a really good quarterback in Tyler Huntley, he’s got a stellar group of running backs with Zack Moss, Henry-Cole, Brumfield and Jordan Willmore. He’s got a very good wide receiver core and he has tight ends who know how to make catches and I think that is the biggest change. No longer are we having to rely on the defense to make plays. We have big playmakers on our offense who can make the big plays the Utah offense lacked in the past. People like Jaylen Dixon and Bryan Thompson have already made big plays this season that we might not have seen years ago.

GA: How do you feel when people say that the real conference championship last year was the Apple Cup? Is that something you guys carry with you paying teams in the north like Washington State and UW?
SM: North games matter just as much as south games but south games carry more weight because the south is a cut throat division, you never know who is going to get it. You don’t know if it going to be USC or UCLA or Utah, it could be any teams year at any given point. So I think that saying the conference championship was the Apple Cup wasn’t disrespectful but the south was also playing these hard games. The Washington- Washington State game is one that I personally love to watch because you never know what is going to happen, it’s very similar to the Utah-BYU game. I honestly had never heard it being said that the conference championship was the Apple Cup. We don’t really hear what is going on up there that much.