Athlete of the Week: Ella Dederick 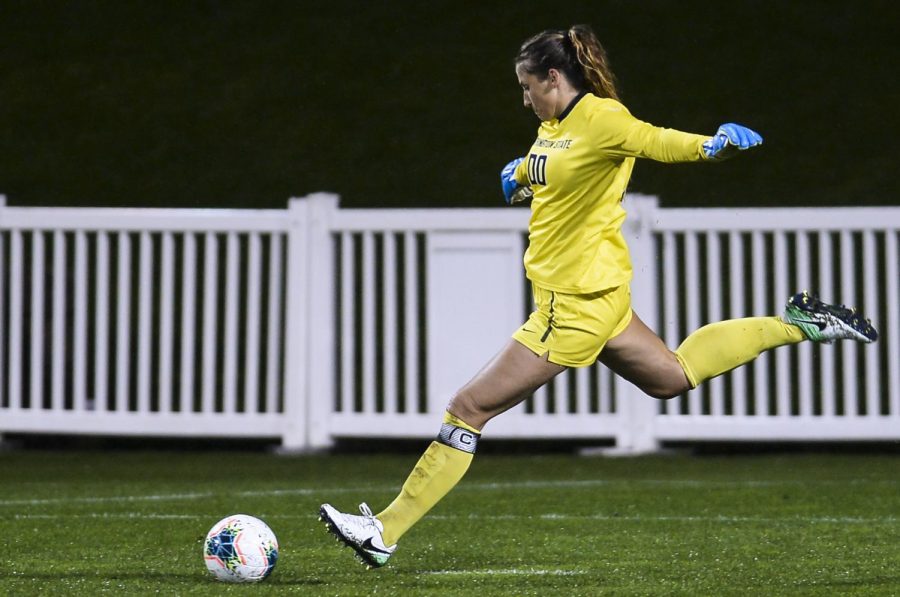 Graduate goalkeeper Ella Dederick kicks the ball during the game against Oregon State on Saturday at the Lower Soccer Field.

Graduate student goalkeeper Ella Dederick saved the day for No. 21 WSU soccer as the team faced Oregon State University Saturday in Pullman. She is this week’s Evergreen Athlete of the Week.

The score would not have been the same if Dederick wasn’t there between the goalposts. She recorded four total saves throughout the game.

The defensive effort allowed the Cougar offense to score two goals by graduate midfielder Averie Collins and junior forward Makamae Gomera-Stevens in the second half, after being shut out in the first.

Dederick also reached a few milestones in her career by setting new records for WSU soccer this weekend.

Securing her 45th victory, Dederick became WSU’s all-time leader for wins. She moved up to fourth place in all-time saves making 250 in her career, as well.

In a WSU post-game press conference, head coach Todd Shulenberger said he was happy with the team’s performance as they received their first Pac-12 win against OSU Saturday.

“It’s huge,” Shulenberger said in a WSU post-game press conference. “It’s like winning your first game of the year. You’re going for that first win, and you get it in a conference that’s loaded.”

He was pleased to hear about Dederick’s record that she broke and helped credit the rest of the team for her performance as well.

“It’s good for Ella. Good for the team. She’s got a good defense around her, and she did a good job,” Shulenberger said in a WSU post-game press conference.

The Cougars will look to continue their win streak as they move on to No. 2 Stanford for an away conference game. It will be WSU’s highest-ranked opponent so far this season.