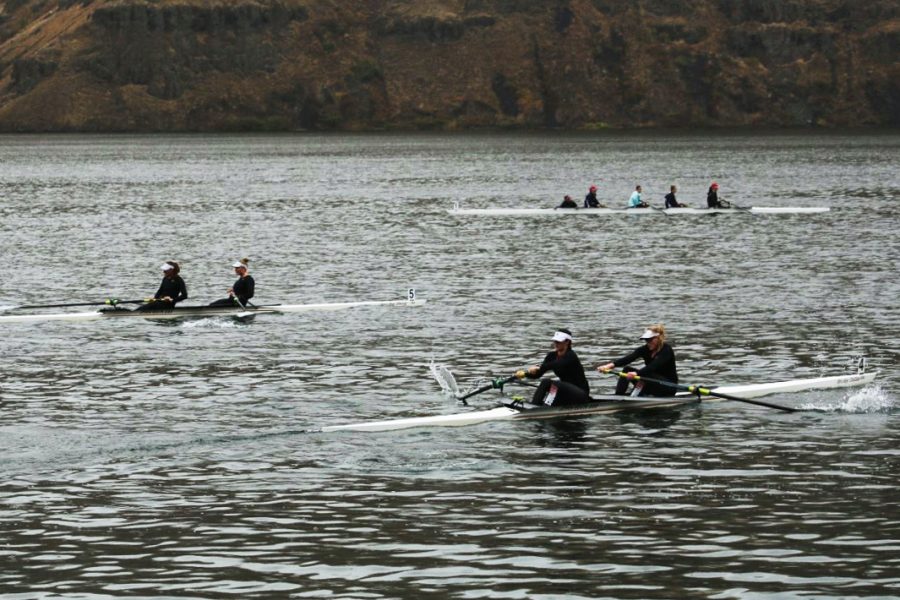 WSU pair works to push ahead with less than a hundred meters left in a race against Gonzaga on Saturday morning at Wawawai Landing.

The WSU rowing team opened its season with a victory against Gonzaga University on Saturday at Wawawai Landing on the Snake River.

Despite the rain and wind, WSU won the pairs and fours races. For the pairs, WSU ended with the fastest time overall as senior Rosalina Torcivia and junior Jessica Norris paired up to finish with a time of 15:57. Caitlin Donaldson and Kateryna Maistrenko finished second with a time of 16:05.

“The wind was quite strong today, so we had a nice headwind going into it,” Norris said. “It was exciting having Gonzaga here.”

Gonzaga’s top pair of Maren Johnson and Zoe Calambokidis finished fifth in the pairs race with a time of 16:55.

“We’ve been trying to get in a lot of miles but also work in various conditions, so I think today was a good testament to that,” Clifford said.

WSU’s next race is the Burnaby Lake 4K TT on Saturday in Burnaby, Canada. Gonzaga returns to the water for the Head of the Spokane against WSU on Oct. 19 in Spokane, Washington.