Golfer works with her team, in a sport thought to be individual 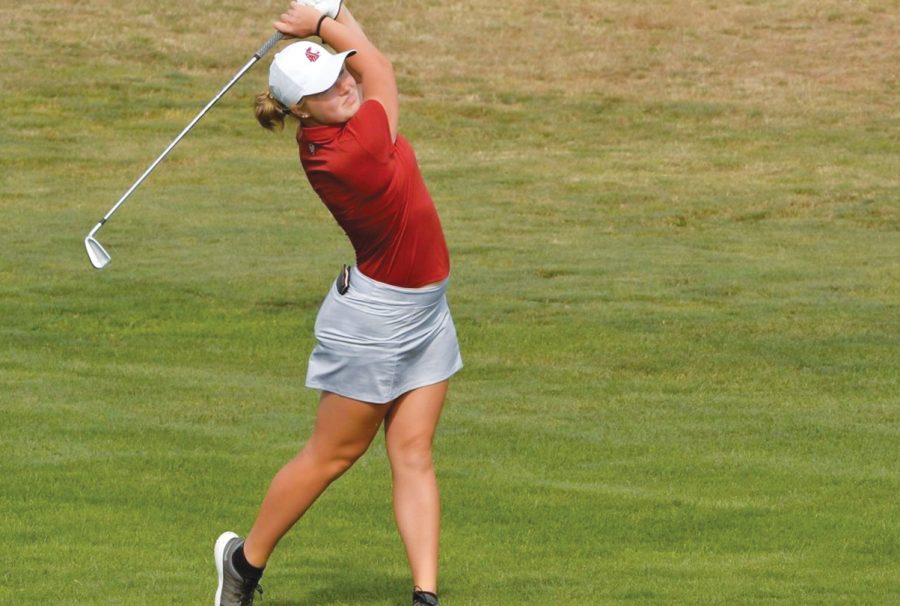 Sophomore Marie Lund-Hansen follows through with her swing during the Ping/ASU Invitational in Tempe, Arizona.

Growing up with her father, mother and older brother in Denmark, Marie Lund-Hansen was no stranger to sports. Her mother grew up in a sports family and her uncle was an avid golfer since childhood.

Lund-Hansen played golf for the first time at the age of 9, but although golf would soon become a passion of hers, it wasn’t the first sport she played.

“Up until I was 9, I basically tried every single sport you could possibly imagine,” Lund-Hansen said. “Then one day, randomly, my mom just said there’s this info night at the golf club, let’s go check it out. I’ve basically been playing golf ever since.”

Lund-Hansen said that she liked all sports growing up but really fell in love with golf after that night at the golf club.

She experienced so many great moments in the 14 years she’s been a golfer that it was hard to pick one that was a favorite, she said, though her days playing for the Danish National Team really stood out to her.

“As a member of the Danish National Team, I’ve played in five or six team championships and two World [Amateur tournaments]. I think those are moments that always stand out when you get to compete for your country. Now I get to compete for WSU, which is awesome,” she said.

Lund-Hansen found golf different at WSU then it was at home back in Denmark. When she played for the national team, she described it more as individuals coming together to play rather than a team. At WSU, golfers practice together, work out together and compete together. WSU provided a sense of team moments and bonding that Lund-Hansen never really experienced beforehand.

As a senior at WSU, she has played for the women’s golf team since she first joined as a freshman. She remembers her first year to be very interesting and a learning point.

“I came in thinking I knew it all,” Lund-Hansen said, “I thought a little bit that I was better than everyone else.”

Lund-Hansen said thinking like that was beneficial in a way. Her high self-confidence and competitive drive as a freshman found her competing with then-junior Alivia Brown for that number one spot.

She said she believes no matter what sport a person goes into as a freshman, it’s important to look at what the upperclassmen do and build off them. Lund-Hansen said although it took her a while to adjust to the culture in her first semester, she had teammates she confided in to help explain logistics.

“When it comes to Marie, I’ve been so impressed when it comes to her buy-in. She came in here as a wide-eyed freshman and has matured so much over the last four years not only with her game, but with her leadership and her ability to connect with her teammates,” Kamimura said.

Kamimura was over joyous with how Lund-Hansen excelled on the course, but also with academics. The golf program likes to focus on more than just the athletics side of the student-athletes.

Given the extensive amount of time that Kamimura has spent with Lund-Hansen, she said that there is much more to her than just being a student-athlete.

“Marie is very passionate about school, about Denmark and about other people and wants to grow in a lot of areas in life. She trains so hard that it can be easy to overlook that stuff because while student athletics are awesome, they’re super intense with school, sports, a little bit of social,” Kamimura said.

As Lund-Hansen began her senior year, she focused on competing but said she’s also thinking about what is next down the road.

She wants people to know that while golf is fun, it isn’t her whole life, she said. It’s always been important to separate golf from her other passions, but to also develop a sense of individualism, she said.

“Right now, I’m figuring out what I want to do,” Lund-Hansen said. “Do I want to pursue golf? Do I want to pursue a master’s degree or something else completely? I’ve played golf for so long and I think there are so many of us at this point in our senior year where we have to make hard choices about what we’re going to do.”