The swim team would be different without Duarte on the squad 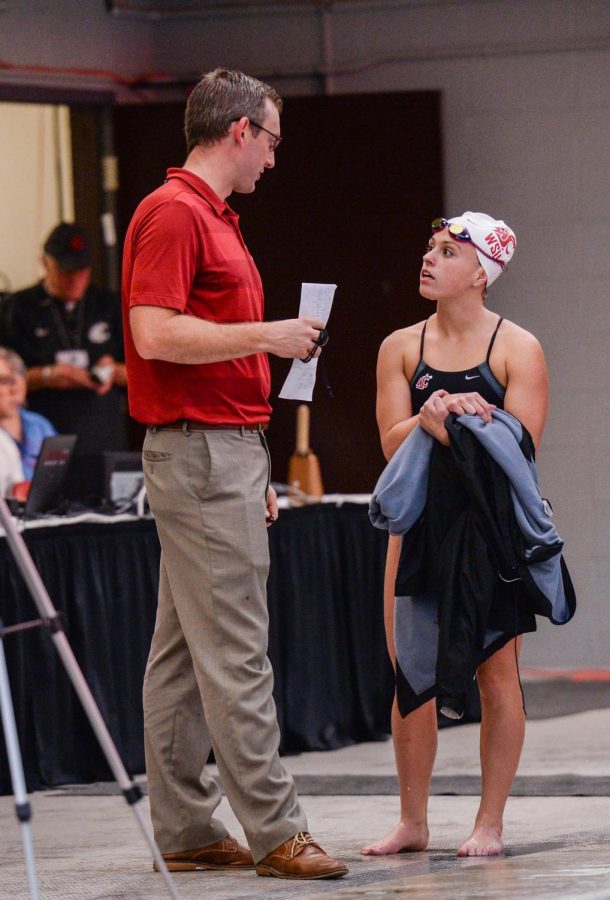 Mackenzie Duarte has put WSU Swimming on her back since she joined the team as a freshman. Last year, she represented WSU in multiple events at the NCAA Championships.
Now a junior, Duarte accomplished many things [just say what the things were] in her collegiate career. For her, going to the NCAA Championships ranks amongst one of her favorite memories.
“Going to NCAA’s is probably one of my biggest accomplishments,” Duarte said. “Looking at other girls in our conference that are going out there and winning NCAA’s, that’s something I want to be.”
Growing up in Martinez, California, Duarte noticed a surge in competition once she made it to the collegiate level swimming.
“I think being in the Pac-12, it was definitely more competitive,” Duarte said, “and it became more real and serious than just swimming at a USA club swimming level.”
Duarte placed the highest in individual competition in Cougar history at the Pac-12 championships last season.
The hype around Duarte is justified, said Ron Heidary, one of her high school swimming coaches.
“I met [Duarte] early in her sophomore year of high school,” Heidary said. “She was a competitive summer league swimmer and wanted to make the move to the next level.”
Despite Duarte’s talent for the sport, she did not start swimming at a competitive level until just before she came to WSU.
“She approached me about the possibility of training year-round with my club team, Orinda Aquatics,” Heidary said. “She joined and we worked together for almost three years.”
She did have some experience with swimming before she joined the competitive league.
“I always did summer league recreational swimming since I was five,” Duarte said. “I didn’t start swimming competitively at an elite level until my sophomore year of high school.”
After getting accustomed to swimming, it became clear that Duarte wanted to move onto the college scene.
“Mackenzie and I met numerous times about her desire to compete in college,” Heidary said. “We had a list of about five good schools and ultimately decided that WSU was the best fit.”
Pullman and its college attracted Duarte and her coach, with a combination of the environment and the scale of the school.
“She loved the school, the location, the team and the fact that it is in the Pac-12 Conference,” Heidary said. “She wanted to compete with the best swimmers in the country.”
The environment in Pullman was also somewhat like her hometown, considering the size of the two towns, but contrasted her experience growing up enough to feel fit for Duarte to attend, she said.
“I had lived [in Martinez] all of my life,” Duarte said. “[Martinez] is a small town, but we live by the Bay Area … so it’s very different from Pullman where the closest city is an hour and a half away.’
Duarte and Heidary are still connected to this day, as they visit when she comes home to Martinez during breaks.
“Mackenzie was home last summer,” Heidary said, “and trained with me during the summer-long course season.”
Heidary said she was impressed by Duarte’s development since making the move to the college level, earning experience at Pac-12 and NCAA Championship events.
“Mackenzie’s improved dramatically with Orinda Aquatics but since going to WSU, she has really gone to the next level,” Heidary said. “As much as she has improved, her upside is still enormous. She can still improve her technique, training base and strength.”
Duarte has always been a hard worker, taking responsibility for her own accomplishments in her swimming career, Heidary said.
“My greatest influence is my dad,” Duarte said. “He was a collegiate athlete too and I always grew up in sports. I wouldn’t say that there is really one soul person who really motivated me, I always had my own internal goals.”
Heidary thinks Duarte can achieve whatever she imagines.
“Mackenzie has the work ethic and dedication to achieve her goals,” Heidary said. “Her potential is really unlimited. Additionally, she is a wonderful person and a strong leader in the pool and on the deck.”
Duarte does not sell herself short, she said, as her goals for this swim season are lofty, including making the A-cut time for the NCAA Championship in her events.
“My goals for this year include going back to NCAAs,” Duarte said. “I want to final at NCAAs too.”
Duarte and the Cougars can be caught swimming next at the two-day Chick-Fil-A invitational, held by Fresno State University in Fresno, California.