‘Women’s sports are on the rise’ 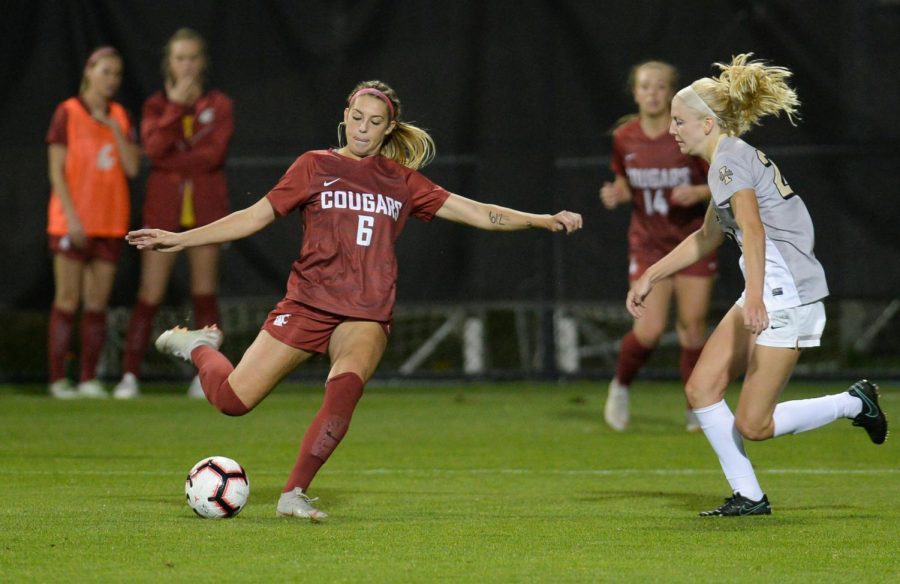 Junior forward Morgan Weaver scored the second goal of the game, making her way past multiple Idaho Vandal players in the match on Sept. 6, 2018 at the Lower Soccer Field.

For the past four years WSU soccer player Morgan Weaver brought the same energy and grit to her game every time she stepped on the field.

“I want to be known as a hard worker. No matter what, I am not going to give up,” Morgan said. “I don’t want to take a day off.”

The Missouri Athletic Club picked the 5-foot-10-inch senior forward from University Place, Washington, to the 2019 watch list for the Hermann Trophy. The trophy will be awarded to the best player in the female soccer in the nation.

Morgan’s mother Jana Weaver said she is most proud of Morgan’s work ethic.

“For her it’s about having fun, but also she works hard and expects people to work hard,” Jana said. “She’s been like this since she was little.”

Her success over the course of her challenging years as an athlete and a human development student at WSU did not go unrecognized.

Her junior year, the Pac-12 named her All-Pac-12 first team before she participated in the U-23 National Team camp in the offseason to play the game she loves at the Portland Thorns Invitational.

Head coach Todd Shulenberger, who has coached Morgan her entire career at WSU, said a part people forget about her game is that she a great passer and an even better distributor. Morgan makes the other players around her play better, he said.

He told The Spokesman-Review that she is a winner and has a big heart.

“She’s a fun player to be around. She’s easily coachable, she’s an awesome athletic performer here and she scores goals. So to have her back for her senior year was a big bonus for us,” Shulenberger said in August to The Spokesman.

Morgan said she deeply admires and appreciates the young girls she sees watching from the sidelines and advises they follow their dreams no matter what it is.

“I have always been told this since I was little: if your coach is yelling at you it is a sign they want you to achieve and do better,” Morgan said. “It means they haven’t given up on you.”

Morgan said after her senior year in Pullman, she hopes to continue to play the game she loves beyond her college years in the National Women’s Soccer League.

“I keep dreaming bigger every time. Now my dream is to play professional soccer. You can’t stop dreaming and you can never stop believing in yourself,” Morgan said.

Morgan’s father Mike Weaver wears the same yellow jacket in the stands during every game, she said. He said that if she still loves the game, he believes she is capable to go to the next level.

“It was fun watching her take the next steps, get to one level and get to the next level and now what’s she’s doing is awesome to watch,” Mike said.

Morgan said both of her parents have been an important support system throughout her life.

“They have sacrificed so much,” Morgan said. “The reason I am here is because of my parents.”

The atmosphere in large crowds and Friday night games in Pullman is what Morgan said she will miss most after her time wearing her number six red cougar jersey.

An unforgettable moment for her was beating the University of Washington on Dad’s Weekend almost a year ago in Pullman, she said. During the game Morgan scored three goals.

Morgan said she does wish that people came to watch more to not just WSU soccer games, but more women’s sports in general.

“I think women’s sports are on the rise,” she said. “I mean, look at women’s soccer during the World Cup.”

Morgan said she hopes to inspire future generations by just showing support and that their dreams are limitless.

“It should not just be a male thing and we should have equal pay,” Morgan said. “I hope people respect women in sports.”