Kemp found her home at WSU 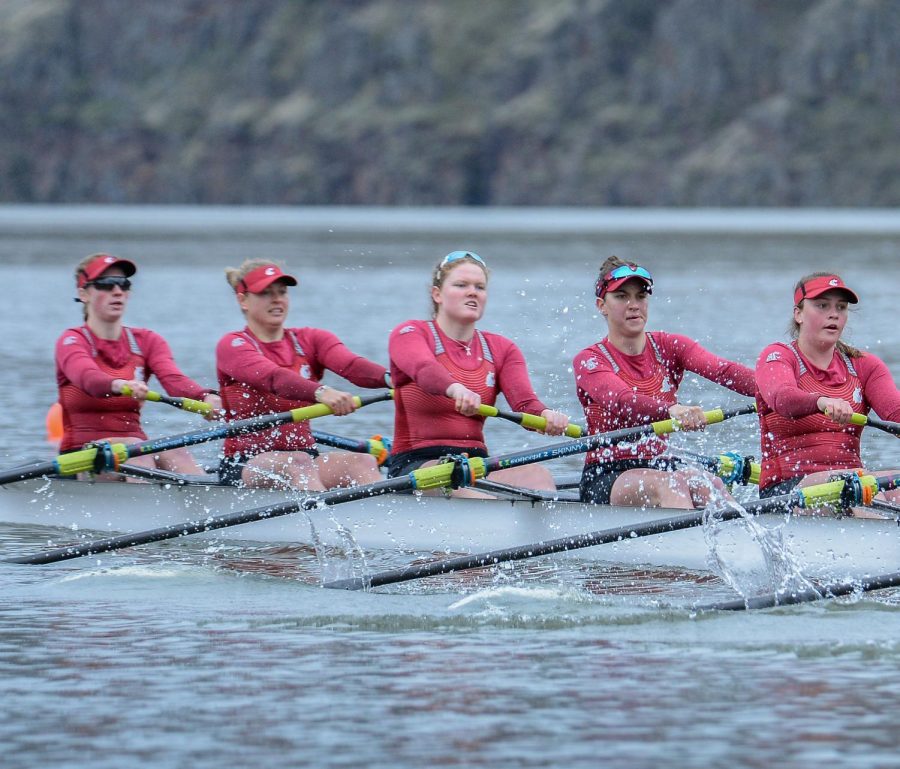 During the time Renee Kemp attended high school and rowed in New Zealand, an unfamiliar man approached her at a regatta.

That man was Karl Huhta, former Cougar rowing assistant coach. He told her he represented Washington State University and was interested in recruiting her to the rowing team.

She said her immediate thought upon meeting him was, “I’m not going to America — no way.”

Renee later searched the university to figure out where it was. She was taken aback by the number of times she saw the phrase “Go Cougs.”

Fast forward to nearly four years later and Renee is now in her senior year rowing at WSU looking to attain a degree in viticulture and enology.

She was a latecomer to rowing as she spent most of her childhood playing netball and volleyball. She even competed in the Sanitarium Weet-Bix Kids TRYathlon when she was six or seven, her father Neville Kemp said. The triathlon is sponsored by a New Zealand cereal company with the goal to help kids stay active and healthy.

“She was always competitive in swimming and running,” Neville Kemp said.

Renee Kemp said her parents had a particular desire for her to play team sports. They turned her down when she asked them if she could swim.

Her parents turned her down when she first asked if she could row, as it was an individual sport at her high school. With rowing practice on Sundays, it was hard to add that type of commitment for her and her family that was also committed to church.

Neville Kemp said that during one of her netball games, he ran into the rowing coach for the school and found [name] leaning on a fence waiting for him.

“He told me that girl should be rowing,” Neville Kemp said.

Shortly after that encounter, Renee was a member of the rowing team at Te Awamutu College, a secondary school located in at Te Awamutu, New Zealand.

Renee used to row a single boat at Te Awamutu. It was a culture shock for her to row on a team at WSU, she said.That was not the only shock for her.

“The amount of wheat fields I saw on the drive here caught me off guard, but in a good way,” she said. “I wouldn’t be able to handle a big community, this was perfect.”

It reminded her of home, a rural area on the north island in New Zealand, she said.

Renee’s father shared a similar feeling when he first visited the campus before her freshman year, he said.

Neville Kemp said he was nervous at first about sending his daughter to the other side of the world, especially because he didn’t even know what side of the U.S. it was on. She also had an offer from Yale also, a school everyone has heard of, he said.

“Karl sold it for us, he seemed so genuine,” he said.

He visited the campus before she did because she still had to get her passport. But because she’s been at school, she’s taken him to lectures and football games when he’s come to visit.

“I love where she is,” he said. “It’s way better for her than a high-profile university like Yale.”

At WSU, she discovered her love for viticulture, she said. It took a while for her to find what she wanted to major in, but her adviser helped her fit it into a major after she initially planned it as a minor.

“When I tell people I study wine, they think I drink a lot of wine,” she said.

She said it is more science-based than what people expect, as she focuses much more on how grapes evolve into wine.

WSU rowing coach Jane LaRiviere said Renee is a determined and strong person and was elected the president to the Student-Athlete Advisory Committee by other student-athletes.

“She’s the type of person that likes to serve, and it shows since she was nominated by that committee,” she said.

Neville Kemp said he’s seen that trait in her for as long as he can remember, and it is part of joy and pride she’s brought into his life.

“She’s a loyal friend,” he said. “She’d do anything for anyone, they only got to ask.”

For Renee, rowing has easily been the highlight of her experience at WSU, she said. Coming from a single rowing boat to a team with about 40 women has helped her grow, she said.

“Coming in, I felt like it was a sports camp,” Renee said. “Communicating as an eight is completely different.”

She said rowing is unique from other team sports because everyone in the boat is doing the same thing.

“In other sports like football, there’s always one player where you say that guy is so good,” she said. “That doesn’t happen in rowing, you can’t row an eight-person boat by yourself.”

She said rowing is one of the most graceful things to watch.

“It’s so monotonous, but it’s beautiful,” she said. “It’s smooth and soothing to watch a boat that runs through sheer hard work.”

Rowing and viticulture show that Renee loves to have fun, Neville Kemp said. He remembered taking her to circuses when she was a kid where he pushed her in a trolley, painted with finger paint, played with sand and rode on amusement park rides.

“Her attention to detail and passion really stands out to me,” he said. “When she does something, she does it 100 percent and as best she can- and it’s because of her enthusiasm for life.”

Kemp plans to return to New Zealand after she graduates this spring. She said she hopes to row for the New Zealand national team one day.