Watch out for brushes with death on Greek Row this October; it takes one crazy guy with a bottle to end it all 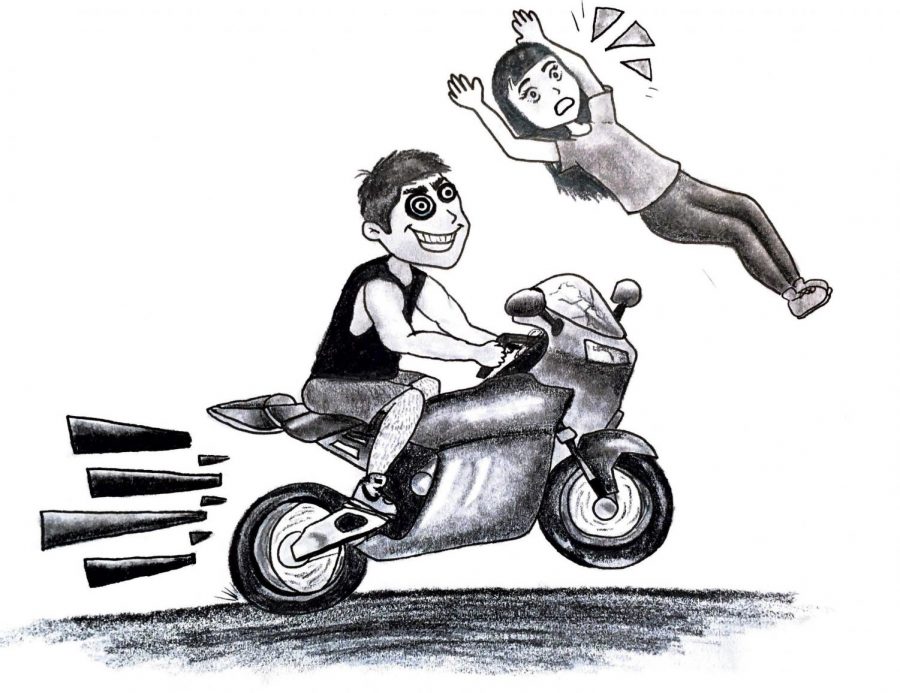 Life is a jungle, so don’t get caught out there in the wild. Protect yourself from drunkened fraternity men during Spooktober.

This Halloween season, with all the horror-filled celebrations going on, be aware of your potential demise.

Reports show frat members have been arrested for a large number of homicides this fall.

It won’t be scary movies or haunted houses that will scare you to your core: it’ll be the lurking fear of a Frat Fiend hunting you down and brutally killing you like the wild animal you truly are.

“It’s a prank bro,” said Beta Omicron Omicron (BOO) member Jason Zorgees. “If you die in the process, that’s on you. Welcome to real life, this is college.”

This story is meant to be a guide to the possible ways you could die horribly at the hands of this Fiend and to possibly protect yourself from a grisly fate.

Have you ever been walking around Northside and saw a car passing by a crosswalk a little too fast? Did you ever feel close to being hit by a car while sneaking out of Greek Row?

That wasn’t an accident, that was a brush with death you may have experienced.

Many Frat Fiends see a student crossing the street while on their phone as easy pickings to hit. They’ll drive just fast enough to cause the person to slam into their windshield and collapse on the ground, landing on the road a crumpled mess and near-death.

This gives them a chance to drive off, free of any guilt or responsibility for their target’s demise.

“Sometimes I see a pedestrian walk out not paying attention like they’re texting,” Zorgees said. “I’m just like, literally I wish I hit you.”

With blunt weapons, we aren’t talking about the usual suspects like bats, shovels, rakes and sports equipment, as it takes effort to acquire those things. Frat Fiends don’t like effort, no, no.

We’re talking about bottles, the party decoration of every frat rave rampage. It doesn’t take much for one well-armed and maniacal guy to take a bottle and use it in many devious ways.

If you’re enjoying the party a little bit too much for his liking, he could wait for you to go into a different room and “knock” some sense into you.

A couple of whacks and smacks later and your head is spaghetti sauce against the carpet of a bedroom in Rho Omicron Omicron. Not the Viking funeral you were expecting, now was it?

Guns are obvious weapons. However, balconies are a good location for frat guys to take people out.

Because, though balconies are great for causing an unexpected fall, they’re better for manslaughter.

But with masking tape and some paper towel tubes, you can turn that cheap hunting rifle bought at Walmart into a really long smoking pipe in no time at all.

This does seem terrifying — the idea that your life could rest in the hands of some of the most immature people on the face of the planet.

However, there is hope in this safari we call our campus. It’s the safety and solace of calling the campus police. Because if there is anything we can do, it’s getting someone else to do the dirty work for us.