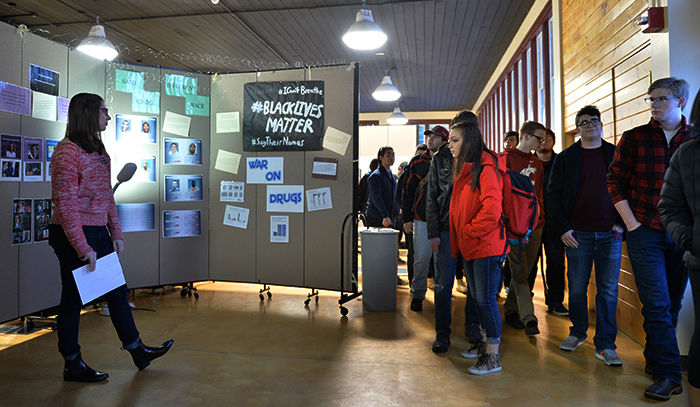 Abby Dovre, who helped with the Tunnel of Oppression event, talks to student participants about racism in today’s society on Monday.

The Tunnel of Oppression is not as ominous as the name suggests. It is meant to be a space to facilitate oftentimes tricky but necessary conversations about various types of oppression that affect people everywhere, including those at WSU.

Acacia Kapusta, Northside’s residential education director, was one of three co-chairs in charge of planning the event. She said this year’s Tunnel of Oppression incorporates social media in its various themed rooms, which are set up in a museum format.

A facilitator from WSU Residence Life leads groups through each of the themed rooms about sexism, classism, racism, cisgenderism and ableism.

In the classism exhibit, attendees were welcomed to stand on either side of paper “railroad tracks.” On one side of the tracks, participants encounter limited access to basic necessities, such as public education, nutritious food, clean water and public transit, limited quality of life and social mobility. This exercise was meant to demonstrate the way life can vary greatly within the same city.

This example was compared to WSU’s campus, where students living on Southside have less access to healthy food compared to those living on Northside or Hillside.

Attendees are free to leave the tunnel if they feel the need to, and interactive exhibits are challenge by choice, meaning they can choose their level of participation, facilitators explained to their groups at the beginning of tours. The only expectation was that attendees keep an open mind and challenge their comfort zone.

After a short presentation, attendees can look at pictures, displays and statistics contextualizing the topic of the room. News media, social media and entertainment examples provided recognizable and modern day ties to each form of oppression.

“The Facebook posts were talking points,” Kapusta said. “You could go in a million different ways about what racism was.”

Kaylee Black, junior psychology major, said she didn’t have any particular expectations for the event, but the way Residence Life provided the information impressed her. She said she found herself able to relate to some of the exhibits while learning more from others.

Parthy Chandak, a junior mechanical engineering major, said ableism was something he hadn’t seen much of in person. He also said he had gone to the Tunnel of Oppression for the past three years and was able to take something new from it each time.

“It increases respect on campus by putting yourself in someone else’s shoes,” Chandak said.

The Tunnel of Oppression’s last day is today, with tours running from 4 – 8 p.m. at the Ensminger Pavilion. WSU Residence Life encourages all members of the public to participate.

“We worked on expanding and making sure that other groups and other organizations were involved,” Kapusta said, explaining the Tunnel of Oppression’s intended audience is the broader WSU community.