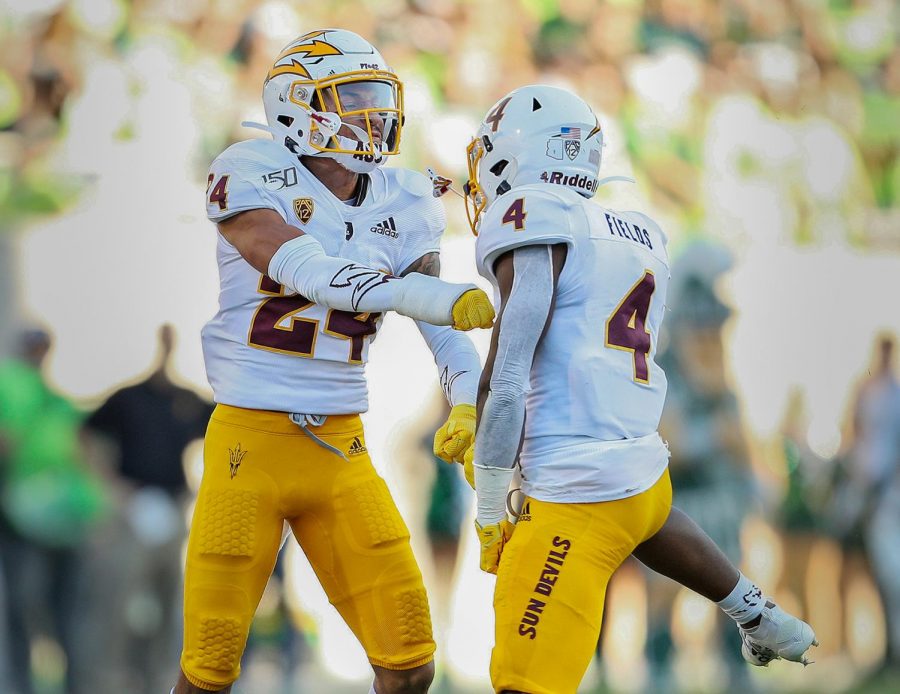 Arizona State defensive backs Chase Lucas (24) and Evan Fields (4) react after a tackle in the third quarter of their college football game against Michigan State at Spartan Stadium in East Lansing, on Saturday, September 14, 2019. Arizona State won the game, 10-7.

We are halfway through the college football season and the race for the College Football Playoff is becoming more interesting with matchups to come in the top 25, especially the top 10. After this week of college football, here’s what’s right and what’s wrong with this week’s AP Top 25 for Week 7.

What is right with the AP Top 25 Poll this week:

Alabama and Clemson both had byes, so they obviously weren’t going to move at all. But Ohio State, beating Michigan State at home and Georgia beating Tennessee on the road, now sit tied at the third spot. If Ohio State keeps this up and avoids a bad loss in the future, then they will end up in the playoff.

LSU and Oklahoma will likely round out the top six, but now it gets interesting. Florida and Wisconsin now have a reason to get a spot. Florida comes off a win at home against Auburn, the biggest win of the season for them. Also, Wisconsin whopped Kent State at home.

Notre Dame is also not a surprise. They shut out Bowling Green State University at home. They should not move up or down. Penn State in the top 10? Good. Penn State is an underrated team, even if they haven’t faced anyone good yet. They will eventually get the respect they deserve when they play good teams, but finally, after this weekend Penn State can crack into the top 10.

Utah and Arizona State both had byes this week so with the UW and UCF losses, they moved up a couple spots. Michigan and Iowa faced each other in a very defensive game in Ann Arbor, resulting in a 10-3 Michigan win. I expected Michigan to leap Iowa and having them right next to each other in the rankings is right.

Baylor is an underdog team in the Big 12. Now yes, they haven’t faced anyone either, but they deserve to be in the top 25 now. Memphis is the same as Baylor, a good undefeated team that should get some recognition because of their undefeated record, even though their competition is abysmal. Both Baylor and Memphis are good teams, with strong offenses. They needed to be in the top 25.

What is wrong with the AP Top 25 Poll this week:

Auburn should be ahead of Texas. Though Auburn lost on the road to a freshman quarterback, Texas didn’t look too hot either. Auburn has looked good all season and in their second big test of the season, they did lose to a top 10 team.

Meanwhile, Texas did not look like a top 25 team against West Virginia in the first half. Why does Texas get to be ahead of a good SEC football team? Just because Auburn lost by 11 on the road to a top 10 team doesn’t mean they are not a top 10 team anymore.

The only reason SMU is in the top 25 this week is because of the UW and UCF losses, and their ability to come back down 30-9 with 11 minutes left in the third quarter and somehow win 43-37 in triple overtime against Tulsa. They have no reason to move up more than one spot when they are losing by more than 20 at home. They barely pulled out a win and looked horrible for 34 minutes. They at least deserve to fall a spot or two in the rankings.

Why is Texas A&M still in? They’re not a top 25 team. They’re still the only 2-loss team in the top 25, and they must play even tougher competition soon. If they are barely winning easier teams at neutral sites, wait until they have to play even harder competition at home or even on the road.

Notable matchups for this week: