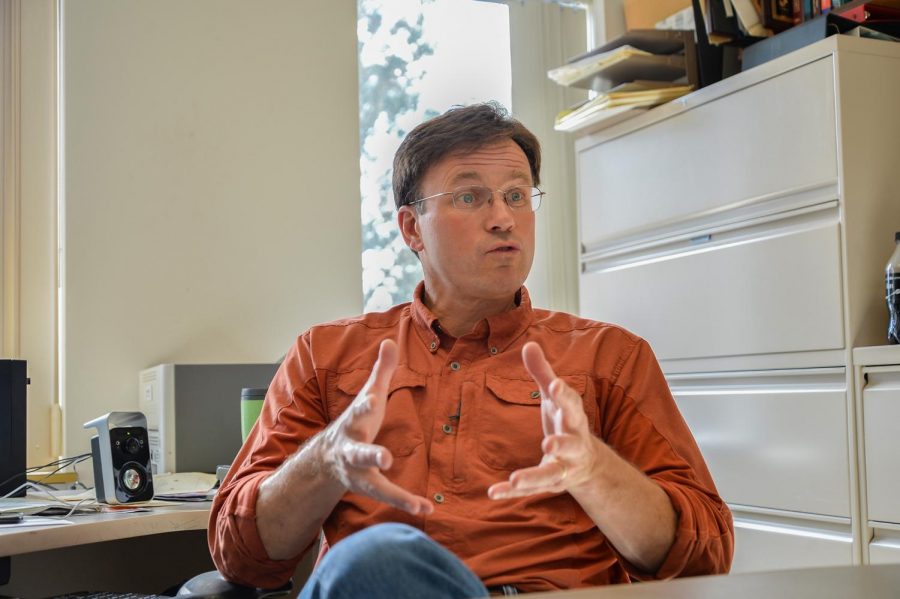 Jonathan Yoder, WSU professor of economics and director of the State of Washington Water Research Center, speaks about the connectivity between ground water and surface water.

Researchers found out how to offset the effects of drilling wells for groundwater to provide guidance for the implementation of a new Washington state law.

Groundwater and surface water are often connected, said Stephen Katz, WSU associate professor in the School of the Environment.

If groundwater is pumped out of the ground and lowers the water table, the flow of a stream might decline because water seeps into the ground, said Jonathan Yoder, WSU professor of economics.

Katz said that taking that water out of the ground can affect fish in streams and can affect people who like participating in recreational activities, such as kayaking.

Yoder said the new law states that counties can allow small, rural, residential well development if a watershed restoration and enhancement committee develops a plan to offset the effects that pumping groundwater will have on surface water.

Researchers from WSU, the National Marine Fisheries Service and the Washington Department of Fish and Wildlife accumulated existing scientific literature on this subject to determine what was not known about the subject, Katz said.

Their research determined ways that people can make quantitative assessments to show that the water that is taken from the ground will be offset by actions they plan to undertake, Katz said.

To offset the impacts of removing groundwater, it is necessary to replace that amount of water in the stream or to improve the quality of the environment, Katz said.

Habitat restoration, such as putting up fencing to keep cattle out of streams, is a way to improve the quality of the environment and offset the groundwater use, Katz said.

“You need to understand the connection between the action you take – that habitat restoration project – and then a near-term objective, which is, ‘How does that change the amount of water in a stream?’” he said.

He said that with these offsets, whoever is reliant on in-stream resources, such as people or fish, would not be negatively impacted.

Yoder said the preferred method to mitigate the effects that groundwater pumping has on surface water is to buy a surface water right.

A watershed restoration and enhancement committee could buy someone’s surface water right and retire it. Then the water would not continue to be removed from a river, so there would be more water in that river, Yoder said.

The new law was implemented because of a lawsuit known as the Hirst decision, which states that counties must show that there is enough water for the county to issue a permit-exempt well, he said.

A permit-exempt well is intended as an easy way to let people drill a well for residential property that will use a small amount of water, such as for indoor domestic use or to water lawns, Yoder said.

To have a permit-exempt well, it is not necessary to go through a permit process to have a water right, which is necessary when a larger amount of water is going to be used, he said.

For much of 2017, Washington state had no capital budget because there was a legislative stalemate involving the Hirst decision. People were worried about its effect on rural and residential development, Yoder said. The stalemate ended because this new law was passed in 2018.

“This is really all about the effects of groundwater pumping on surface water,” Yoder said.