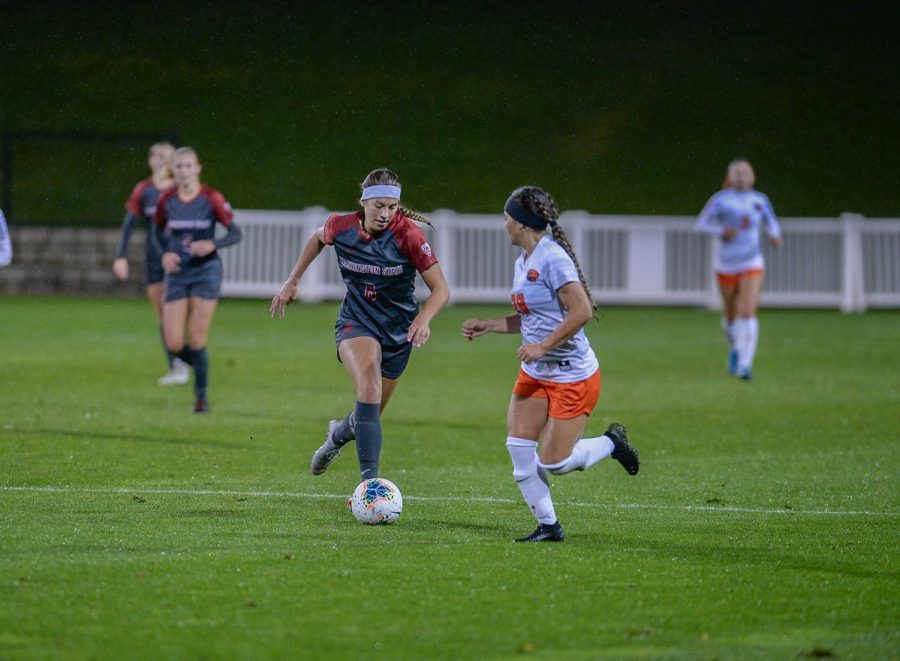 Senior forward Morgan Weaver attempts to dribble past the OSU defense on Sept. 28 at the Lower Soccer Field. WSU won the game 2-1.

No. 15 WSU soccer will play No. 25 Arizona at 7 p.m. on Thursday on the Lower Soccer Field in Pullman.

As WSU enters its third week in Pac-12 play, head coach Todd Shulenberger said in a press conference that he is hopeful for where his team is at.

“The key in the Pac-12 is managing your wins and managing your loses,” Shulenberger said in a press conference. “So, now it’s all about consistently moving forward.”

“Everybody has a different type of style that pose a different threat for us,” Shulenberger said during a press conference.

WSU recently came off a tough loss against No. 2 ranked Stanford in the Bay Area losing 5-0, but bounced back on Sunday with a 1-0 win in overtime against Cal.

Junior forward Makamae Gomera-Stevens from Kapolei, Hawai’i scored for the game-winning goal for the Cougars. She said they have the momentum they need going forward.

“Our team knows exactly what to do and what mindset to be in during the game to prevent a loss from happening,” Gomera-Stevens said.

Sophomore midfielder Elaily Hernandez-Repreza assisted the play to Gomera-Stevens by a long throw-in. She said as a teammate it felt amazing to contribute to a goal that led her team to a win.

“As a player, it just gave me a little more confidence going out to the next game coming up,” Hernandez-Repreza said.

She said that her team is excited to play Arizona at home, where it is cold. She believes that the weather will be an advantage to her team.

“We are excited,” Hernandez-Repreza said. “We are ready to prove that we can win big games.”

Arizona’s Brooke Wilson leads her team with six goals scored this season, one more ahead of senior forward Morgan Weaver who leads the Cougars with five.

“We have our work cut out for us from both teams,” Shulenberger said in a press conference. “But in the Pac-12, every game’s a grind.”

He said that he is proud of his team across the board. Specifically, he noted junior defender Brianna Alger, graduate student goalkeeper Ella Dederick, graduate student midfielder Averie Collins and Weaver for their hard work this season.

“When someone looks us up, they better check on everybody [on the team],” Shulenberger said in a press conference.

Washington State will play Arizona at 7 p.m. on Thursday in Pullman, followed by Arizona State University at 1 p.m. Sunday on the Lower Soccer Field.