Wildcats out of the bag, into the net 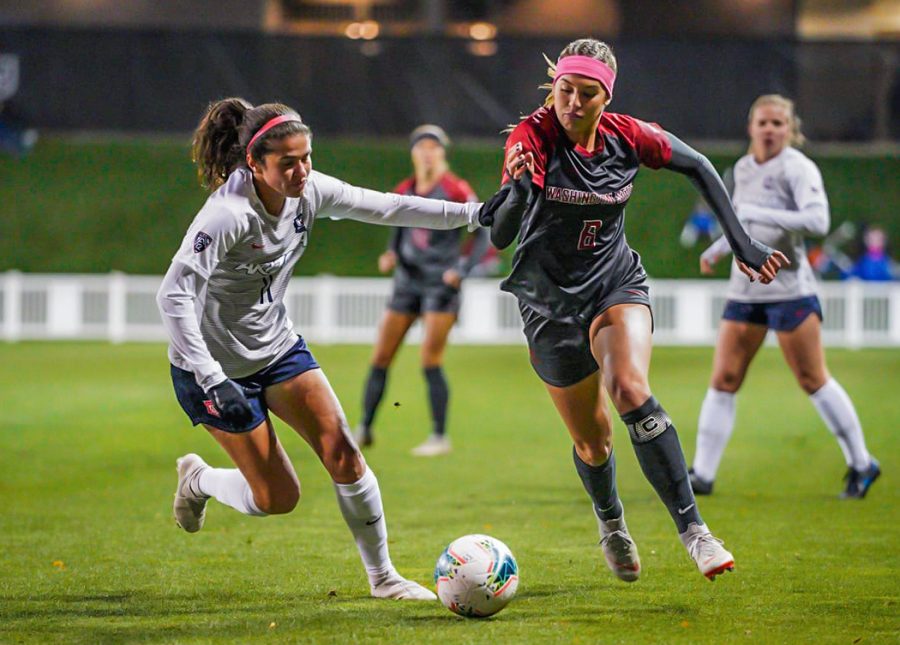 The weather in Pullman was cold this week but No. 25 Arizona Wildcats brought the heat against No. 15 WSU soccer. The Wildcats brought home a 1-0 win Thursday night on the Lower Soccer Field.

Since 2014, Washington State has lost to Arizona in the last six matches, four of those matches ending within a one goal difference

From start to finish the two nationally ranked teams played eager for a win. It was a fight for a goal between both teams.

“We have got to get back on the scoring track,” head coach Todd Shulenberger said after the game. “Technical finishing was off tonight. We have got to finish.”

In the 81 minute, the Wildcats battled through the Cougars as senior forward Kelcey Cavarra fired the ball to the back of the net after sophomore defender Hallie Pearson and senior defender Samantha Falasco assisted her from a corner kick. The goal marked Cavarra’s first goal of the season.

Shot after shot, the Cougars and Wildcats battled through tackles and headers to put a goal on the board for their teams.

While Arizona’s freshman goalkeeper Hope Hisey only made seven saves, each save was vital for the Wildcats against the Cougars. Hisey broke her career high for saves in a game, just passing her previous record of six against Colorado in late September.

“At the end of the day my teammates believe in me,” Hisey said. “It is obviously intimidating to come out and play a team that is ranked ten spots higher than you on their home floor in their weather.”

In the 22 minute, Hisey dove deep to her right to stop Washington State’s junior forward Elyse Bennett shot on goal that would have put the Cougars on the board early.

In the 54 minute, Hisey and her backline stopped the Cougars senior forward Morgan Weaver from scoring. Hisy tipped the ball after just skimming the tops of her hands passing over the top of the cross bar.

“It was just great to do everything I could to help the team win, that’s the end goal,” Hisey said.

Only minutes later, Weaver just outside the 18 yard-box flicked graduate student midfielder Averie Collins a shot on goal. Collins missed the back of the net after another save from Hisey.

The Cougars graduate student goalkeeper Ella Dedrick made two back-to-back important saves in the second half for her team. She stopped one after a cross back post and then again calmly came out of her box reaching above Arizona’s offense to settle the ball in her hands for a save.

With only 20 seconds left in the match, Collins just missed the back of the net to end the game with a tie.

Shulenberger said his team plans to bounce back, move on, and be resilient in their next match Sunday.

Washington State will continue to face the Arizona schools this weekend, finishing against Arizona State for a Sunday morning matchup in Pullman.

“We gave everything we had today and we just need to get the ball in the back of the net so hopefully on Sunday we can do that,” Minniss said.