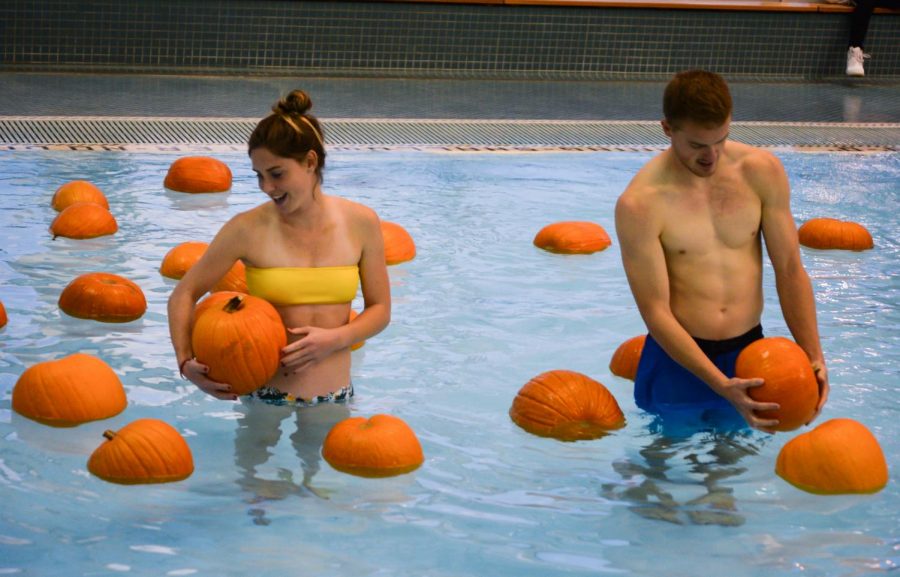 Junior communication major Sam Brixey, right, and senior public relations major Natalie Ackerley inspect the pumpkins before choosing ones to take as their own at the AquaPatch event on Oct. 24, 2018 at the Student Recreation Center.

The WSU Student Recreation Center helped students dive into autumn with a big splash at the ‘Aqua Patch Event’ on Wednesday as the SRC helped Pullman residents experience a new way to pick and carve pumpkins for Halloween.

Jared Lindorfer, coordinator of Aquatics and Safety Education, started this event back in 2017 after returning to WSU from his athletics position at the University of Utah.

Lindorfer and Director of Facilities Jeff Elbracht wanted a new event to encourage more students to enjoy what the SRC had to offer other than swimming-based events.

“What I hope people will get from an event like this is a little financial relief,” Lindorfer said. “I was a college student not that long ago, and I remember the financial strains that one can incur for something as simple as a pumpkin.”

The SRC received donations from local farmers to fill its pool with pumpkins of all shapes, sizes and colors for the students to come and enjoy, Lindorfer said. This year, they received a total of 140 pumpkins.

There were a variety of ways to get a pumpkin. Staff members were present to assist people to grab the one they wanted, or students could go in and find their own.

Students also had the opportunity to decorate or carve their pumpkins at the SRC. Painting and carving tools were provided, and there was also staff present to assist in the carving if need be, Lindorfer said.

Students attended the event and expressed that they had a good time.

“[I was] glad they decided to do it early on in the month,” said Mary Ellen Martinsen, senior electrical engineering major.

She said she loved the idea of being able to decorate the pumpkin at the event.

Other attendees had very similar things to say and overall were very impressed with the flow, creativity and uniqueness of this event. They were also ecstatic about the free pumpkins that they can now decorate their dorms with for the holiday.

“They did really well with making resources available, and it was well planned,” said Olivia Sciumbato, freshman psychology and criminal justice double major.

Lindorfer said he felt like the event was a success and looks forward to seeing the event increase in size in the future.

“If I had an ultimate goal for this event, I’d be able to fill the entire shallow side of the pool with pumpkins, and they would all be gone in the first hour of the event,” Lindorfer said.

Lindorfer got awfully close to achieving this goal. By the end of the first hour of the event, the SRC was down to approximately 60 pumpkins, and after the first hour and a half, they had roughly 40 left. Before 8 p.m. rolled around, every pumpkin had been fished out and taken home by an eager and excited student from WSU.

“[My favorite part is] the adrenaline rush I get from preparing the event and watching it happen, just being able to give back to the community,” Lindorfer said.