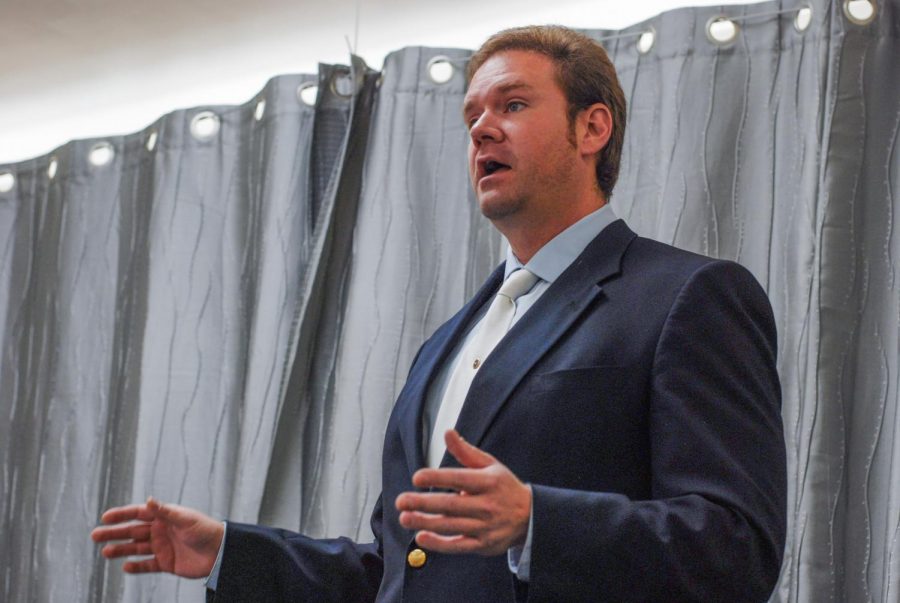 Nathan Weller, chair of the Poverty Awareness Task Force, talks about the resources available to the community that are provided by the task force, which is made up of residents and faith organizations, Tuesday afternoon in the Edith Hecht meeting room at the Neill Public Library.

Judy Stone, League of Women Voters of Pullman member, said the Brown Bag Lunch series occurs monthly on every third Tuesday and is open to the public. She said Brown Bag is an educational forum used to discuss local issues. The members take turns organizing a Brown Bag, Stone said.

“We provide food and shelter for folks who are living in poverty or at that low living wage level,” he said. “Our services are designed really to stabilize people where they’re at.”

Guyett said CAC has resources for residents to move away from poverty such as available housing, the food bank, and energy assistance.

He said dental and medical care were the top two household needs in 2018 within the county, according to the 2018 Whitman County Community Needs Assessment. He said it is common for households to postpone dentist visits and medical procedures in order to pay for other needs such as food and rent.

A common misconception about poverty in the county is that students skew the data rates, he said. Respective studies are done on Pullman residents, WSU students, and a combination of both groups.

Guyett said according to the assessment, around 20 percent of residents are barely above the poverty line in the county.

“[They] are kind of on that financial edge,” he said. “They are one or two missed payments or medical bills or car accidents away from actually becoming a very low-income situation and possibly risking their housing or other needs.”

He said there has been a decrease in vehicle transportation, which means more residents are walking or riding a bike to their destinations.

The poverty rate in Whitman County has dropped from 33 percent in 2015, Guyett said.

“Right now we’re at 27.5 percent,” he said. “The good news is that that rate has gone down. Whether we can take any credit for that remains to be seen.”

Guyett said it is common for low-income households to have a higher rate of obesity. High carbohydrate and low nutrition foods are more affordable, he said.

“That’s not because they eat too much, it’s because of the kind of food that’s eaten on a regular basis,” he said.

CAC is focusing on getting healthier food as well as giving demonstrations on how to prepare healthy food, Guyett said.

Around 55 percent of households rent their property rather than own it, he said.

“A lot of those folks are in student housing, but we still do have a lot of folks who are living in rental housing,” he said. “[They’re] really struggling to pay that rent because our rent prices are so high here in Pullman.”

Guyett said 13 households, around 30 total residents, needed emergency shelter last year. He said most residents will not see people sitting outside with cardboard signs saying they are homeless. There are residents who will stay in their car or with friends because they have nowhere else to go.

“Homelessness in Whitman County is very invisible,” he said.

Nathan Weller, chair of the Poverty Awareness Task Force, said the task force is a group of public and private organizations who work together to address challenges involving poverty in the community.

The task force consists of faith organizations and residents, he said. It helped create the warming center which opened last year.

Weller said the shelter housed a veteran who served in Iraq who was underdressed for the weather last Christmas Eve. He said the man was able to sleep through the night before leaving early in the morning when the shelter closed. However, he said the warming shelter will not be open this year.

CAC runs a Community Relief Fund that provides emergency non-restrictive funding for individuals in the community. Weller said money from the fund was used to house around 95 people in 2014.

He said the fund was used a few years ago to fund a veteran’s bus ticket back to his family in California.

“The best part about that is that family sent a letter to [CAC] thanking them for their assistance,” he said.

Poverty is a complex subject, but people in the community are working together to address it, he said.

“We have to be more agile with how we respond to the needs. We’re so far behind the curve,” he said. “It’s going to take kind of a new way of thinking, I think, to address some of these issues.”

Stone said the next Brown Bag will be from 12-1 p.m. on Nov. 19 at the Neill Public Library. She said guest Ashley Vaughn from CAC will be speaking about food security efforts in Whitman County.