Facility in Othello can be middle-ground for eastern, western WA researchers 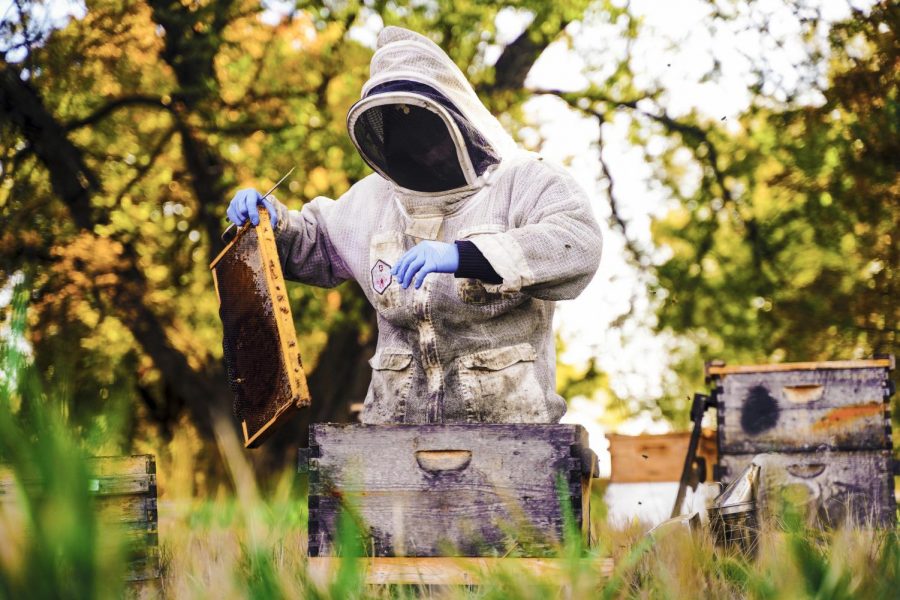 Bees swarm around WSU Apiary manager Rodrigo Guizar as he lifts a frame covered in honeycomb and bees from a wooden container Tuesday morning at a bee site.

A row of styrofoam and wood containers rest on a field near East Main Street on the way to Moscow. Each container houses a cluster of bees huddling over the queen that is often marked with an identifying number on her back.

WSU Apiary manager Rodrigo Guizar uses a smoker in one of the wood containers as Erin O’Rourke, WSU diagnostic laboratory manager, waits with a small jar of alcohol to collect a sample of bees.

The researchers are collecting bee samples to look for pathogens or viruses that affect bees, O’Rourke said. Varroa mites, a type of parasite, are one of the many things researchers in the department focus on.

Sometime next month, a new bee facility in Othello might be open and available for researchers to use, said Melanie Kirby, WSU graduate student in the department of entomology. The facility will be near the WSU Potato Research and Extension site.

Initially, the plan was to build a center on campus, but the cost increased and donations were only trickling in. The facility in Othello will be spacious, Kirby said, and is an ideal middle-ground for researchers on the east and west side of Washington.

She said the facility will have greenhouses that will allow research on plant and pollinator interaction. They also hope to have an outreach center for visitors to interact with bees.

“When people see bugs, they run away and they are scared, but the honeybee stands apart,” said Stephen Onayemi, graduate research assistant in the department of entomology. “It’s different.”

He said one of the things affecting the bee population is varroa mites, which usually rest on top of adult and young bees, also called broods.

“They latch on like a tick and suck the fat bodies,” Kirby said.

Kirby said varroa mites can also transfer viruses. Some of the things the researchers are looking into include environmental factors and mushrooms that could control the parasites.

Onayemi said aside from the honey that bees produce, studying the social nature of the bees is important. If something were to happen to bees, there would be an imbalance in the ecosystem.

Kirby said bees take on different roles in the hive, whether it would be taking care of broods or collecting food.

“Each one is an individual cell, but altogether they make up a whole body that’s working together with all these different systems,” she said.