Maneuvering through Martin Stadium is unfriendly for some people, athletics official says 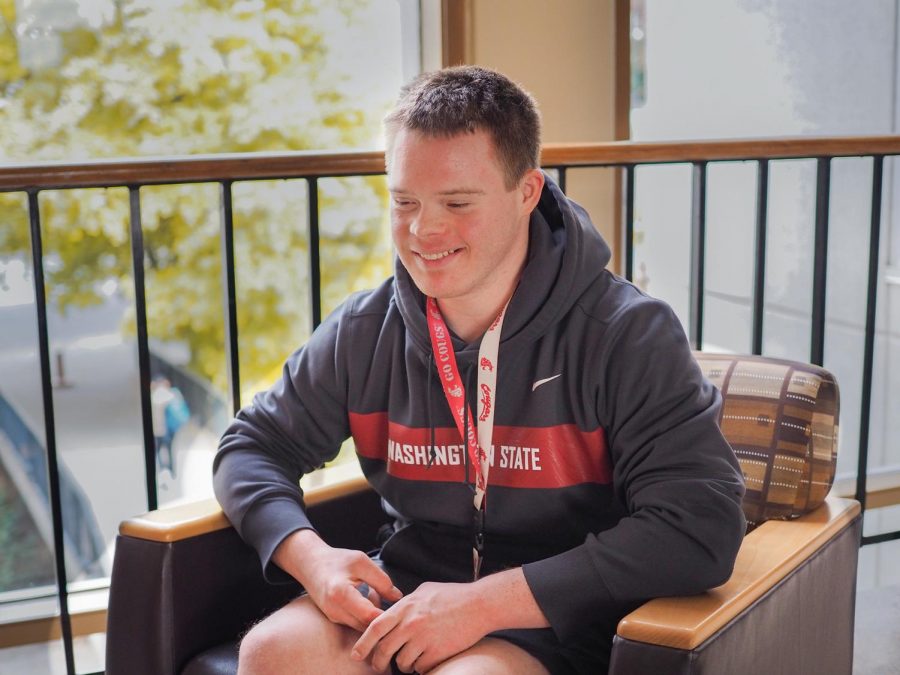 Evan Henniger, sophomore majoring in sports management, shares his experience attending sport events Wednesday at Cleveland Hall. “I like to cheer on the Cougs,” Henniger says.

Evan Henniger was born a Coug. As a eighth-generation student of the school, there was really no other college for him to attend. Except Henniger was unsure if he would be able to attend WSU at all, let alone attend football games.

Henniger is a student in the ROAR (Responsibility Opportunities Advocacy and Respect) program at WSU. It’s one of nine programs in the country of its kind. The program allows students with intellectual developmental disabilities to receive a post-high school degree and experience as much of college as possible. This includes sporting events.

“I like to cheer on the Cougs,” Henniger said.

During the games, he sits in the student section with students in the ally program with ROAR. The program seeks to bridge the gap between students with intellectual developmental disabilities and neurotypical students.

“It’s a win-win for everybody, it’s a win for our students,” said Thomas Falash, director of the WSU ROAR Program. “It’s meant for faculty and traditional students that are here who may not have direct exposure with individuals, and then adults with intellectual developmental disabilities.”

During the football game against the University of California, Los Angeles, ESPN video trucks blocked accessible parking spots. This raised questions about the way the university looked after students with disabilities.

While in the ROAR program students with intellectual developmental disabilities have the option to attend football games with ROAR allies.

Students with different disabilities that don’t qualify for the ROAR program don’t have access to the ally program.

Graduate student Brandon Viall said he loves football. If everything in his life goes correctly, Viall said, he wants to be the commissioner of the NFL.

Viall is a third-year part-time sport management graduate student. He said when he first tried to attend football games as a student, he learned the different ways students with disabilities had difficulties getting to games.

Viall lives in campus housing. He said he has trouble walking long distances because of his various disabilities. During the week, Viall uses the Cougar Accessible Transportation Services (CATS) to get around campus. He said because the vans don’t run on the weekends he can’t use them to get to football games.

Last year there was no way for Viall to get to games, he said. He asked his graduate advisor for help.

Chris Lebens, WSU clinical assistant professor of sport management, spoke to several different athletic administrators to make sure Viall could attend games. However, he said he doesn’t think the accommodations are possible for everyone.

Lebens said students with disabilities just want to feel part of their peers and he doesn’t want them to feel better than anybody else.

Sporting events at WSU are massive but low budget at the same time, he said.

In the work and hustle and bustle people get ignored even though the athletic department tries to give everyone a good experience, Lebens said.

One of the people who helped Viall at football games was Ben Clarke, assistant director of athletics for event management.

Clarke said he tries to give every fan a good experience at football games.

However, he said problems arise around the stadium because of its lack of accessibility.

“Martin Stadium specifically [is] not very friendly for disability needs,” Clarke said. “Just because of the way it’s built, trying to trying to maneuver in it throughout the stadium is extremely difficult.”

It’s important for fans to communicate about their needs ahead of time, Clarke said.

Though ESPN trucks took up the accessible spots near Troy Lane in between the Jordan Schnitzer Museum of Art and Wilson-Short Hall on Sept. 20, WSU Athletics offers paid accessible parking spots in the parking garage under the museum, Clarke said.

The CATS program is a courtesy service funded through student fees. CATS is a small program that offers accessible transportation on campus to students with permanent or temporary mobility disabilities and conditions, according to its website

Viall said he thinks the CATS van doesn’t run on the weekends because of its small budget.

“What message does it send when you’re willing to operate the CATS vans on a shoestring budget? What does that say about the value of individuals with disabilities?” Viall said.