‘After Nov. 12 a lot of people’s lives will be changed’ 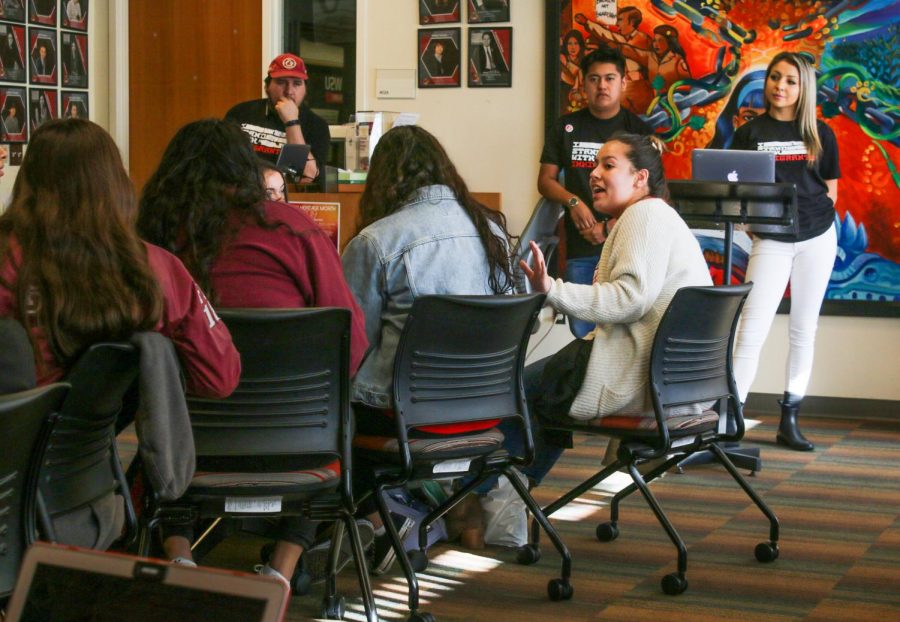 Students discuss how to better support those affected by the upcoming DACA decisions in the Supreme Court on Tuesday afternoon in the Chicanx Latinx Student Center. The presentation was part of the I Stand with Immigrants College & University Day of Action.

The Crimson group along with Lambda Theta Alpha Latin sorority held an event to bring awareness to immigration issues. The event took place at 1:30 on Tuesday in the Chicanx Latinx Student Center (CLSC).

As part of the I Stand with Immigrants College & University Day of Action, members of Crimson group along with Lambda Theta Alpha gave a presentation on immigration reform in the United States.

Over 160 different universities including WSU are participating in the event, said Bianca Chavez member of Lambda Theta Alpha Latin sorority.

The two groups started the program by handing out T-shirts with the phrase “I Stand with Immigrants” to students who attended.

The presentation began when Chavez along with Raul, member of the Crimson group who wished to omit his last name in order to protect his identity, discussed the upcoming DACA renewal decision being made by the supreme court.

Chavez said the Supreme Court will review the DACA case on Nov. 12 and is expected to decide on whether the termination of DACA by the Trump administration was legal.

“One of the reasons we want to focus on this is because after Nov.12 a lot of people’s lives will be changed,” Chavez said.

As part of the interactive aspect of the presentation, members of the audience were given three different scenarios pertaining to immigration. The groups were then asked to talk amongst each other about the scenarios and share their take on them.

“I think it’s really hard sometimes to check your privilege and I feel like with this workshop it gives people that chance to,” Chavez said.

The first scenario of the workshop had students share what they would do if their community was under attack and ICE was present.

Raul said it is important to not spread fear in a scenario like this. He then gave students a hotline number to call if they do experience that situation.

The group continued with their second scenario in the program. This scenario asked students what type of plan they would have if the DACA program is terminated in November.

Chavez said it is important in this situation to not spread fear within the immigrant community and remember to be careful with the things you post on social media.

The last scenario the group touched on was how to be supportive to students that do not receive DACA and how you can help those students continue to pursue their education.

Members of both groups then gave tips on how to support those students. Raul said one tip is to simply be a friend to someone you know might be struggling because of DACA.

The group also explained how to be a good ally to undocumented students. 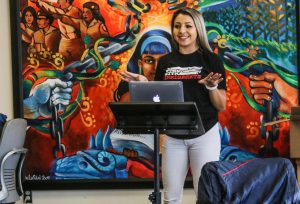 It is important as an ally to check in with our undocumented friends and help find ways to support them finically, through fundraisers or any other programs, said Raul.

Throughout the presentation students shared their own personal stories about being undocumented, and their individual journeys to the United States.

Students also spoke about how DACA has helped them over the years and why they think it is important for the program to continue.

“I think it’s important for students and faculty to pay attention to this event, so they know about upcoming changes happening in the immigrant community,” Crimson group member Brenda Yepez said.