Group to raise funds for students

Crimson for a Cause event to support undocumented students on campus 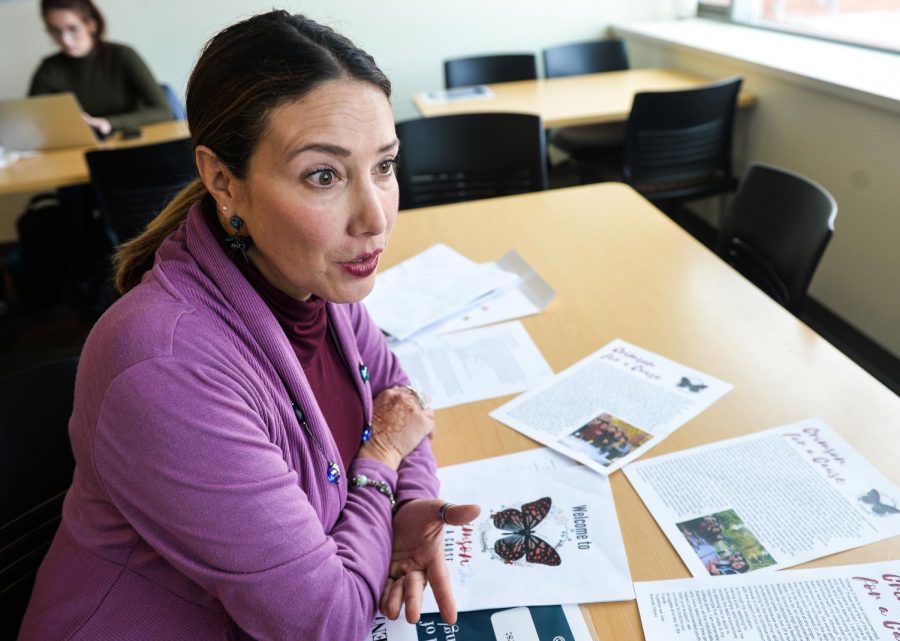 Marcela Pattinson, assistant director for community relations and outreach for the Office of Community, describes the Crimson for a Cause event as a celebration of intersectionality Monday afternoon in the CUB.

The Crimson group will host their Crimson for a Cause event from 5-8 p.m. on Thursday to raise money in preparation to respond to the Supreme Court decision on DACA on Nov 12.

Raul Jimenez, sophomore digital technology and culture major, said the money will go toward paying for students’ DACA renewal and scholarships if the Supreme Court rules to uphold DACA.

If DACA closes, people who previously relied on it will need money for income because they will be unable to work, he said.

“[On] Nov. 12 DACA goes into review by the Supreme Court, so it’s a huge day for those 800,000 plus people so they’re preparing for both outcomes,” Jimenez said.

Marcela Pattinson, assistant director for community relations and outreach for the Office of Community, Equity, and Inclusive Excellence, said Crimson for a Cause is a continuation of efforts to support undocumented students on campus.

Elson S. Floyd Cultural Center was chosen by the Crimson group as the venue spot because it celebrates the intersectionality of people, Pattinson said.

An eight-seat table costs $500, about the same amount as a DACA renewal, Brothers said.

Graduate student Claudia Skinner said to apply for DACA renewal is about $495 so the people at the tables know that they have sponsored a student to apply for the renewal and to keep going with their future in education.

“By the number of tickets sold and donors it is clear how many people are willing to support and be there for the community so that’s exciting,” she said.

Jimenez said they wanted to make the event inclusive because Crimson group represents both undocumented students and allies.

He said stereotypically people think dreamers or undocumented students are mostly Chicanx or Latinx but that is not the case.

“You can be anywhere from the world and you can be a part of us, you can be an ally,” he said. “We’re going to be a family to everybody.”

Skinner said this is the first time they are holding this event and they hope they can hold more in the future. They want the event to build community and show the support that is there for undocumented students in the community.

Jimenez said the goal is to show the community they can be a part of the movement. It is not just the students’ fight; it is the community’s fight.

“I was going to show the community that there’s no divide between the students and there shouldn’t be a divide in the community either,” Jimenez said.