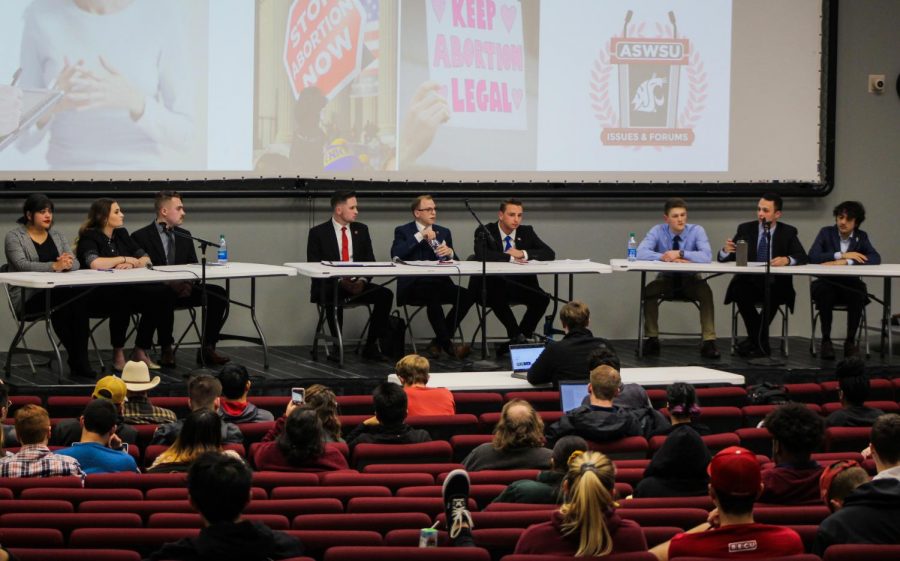 The Young Democrats at WSU, The WSU GOP and the Young Americans for Liberty at WSU debated amongst each other last night and ended the public forum with a handshake between all members.

One audience member asked the group what their stance was on the abortion protest that happened on campus several weeks ago. President of YDWSU Hannah Martian, GOP Chairman Bryant Greene, and YAL member Tristan Glivar all said they agreed the images shown during the protest were graphic and hard to look at.

Glivar said the protest was more of a freedom of speech issue than a healthcare issue and regardless of their stance on abortion, the group had a right to be on campus. Greene said he agreed with Glivar and it is ultimately up to the school to decide if it wants those groups on campus.

“Whether you agree that he’s actually there to do something important or valuable, I think it’s wrong to say people can’t come because we don’t believe they’re here for a legitimate purpose,” Glivar said.

Martian said she agreed the group should be allowed on campus, but she also thought students should have been warned a demonstration that graphic was going to happen.

“They’re just looking to offend people,” Martian said. “We also have a right to know they’re going to be on campus.”

The clubs debated on funding for Planned Parenthood. Greene said his party was against abortions and their funding. Martian said women need to be included in the discussion about their bodies, and Roe v. Wade made abortion access a constitutional right.

Glivar said his party does not have an official stance on abortions as libertarians and that it is up to individuals to decide if that’s the choice they want to make. He said he is against the government funding programs in general, including healthcare.

Planned Parenthood provides many other services to women aside from abortions, and its funding is essential to women, Martian said. GOP member Micah MacDonald said people should not be forced to pay for services they morally disagree with.

“We don’t think they should get any funding of it whatsoever,” Greene said. “If they were to, we actually need to watch them put it more toward things like cancer screenings and medical research.”

Greene said the problem is people associate Planned Parenthood funding with abortions rather than its other services.

Planned Parenthood no longer receives funding from Title X because of policy changes implemented by President Donald Trump’s administration. Martian said three percent of the services Planned Parenthood provides are abortions, but none of the funding went toward abortion procedures.

The clubs discussed tuition and university debt. YAL member Jordan Kurtz said the reason tuition is so high is because the state government started giving loans to anyone that applies for them.

“The only way to fix it is for the government to stop giving out loans to everyone who applies,” Kurtz said.

MacDonald said people need to weigh their options when choosing their degrees and decide if their career choice will be able to pay off their student debt. He said he was against student minority population quotas and college attendance needed to be merit based.

“It’s a bad idea for the government to take over anything,” MacDonald said.

YDWSU secretary Samantha Cruz said people in minority groups are always in search of an education and often have lower socioeconomic status.

“They can’t afford college in the first place,” Cruz said. “The quotas to fulfill that are giving them more of a benefit than they lack in privilege.”

YDWSU community liaison Colin Watts, GOP vice chairman Tanner Elliott and YAL member Jonah Ryan all said they agreed the U.S. should limit its intervention in foreign affairs and give aid to countries that supported democratic values the U.S. shares.

All three also held different opinions of the House Democrats’ efforts to impeach President Trump and his involvement with Ukraine.

“God is it a confusing spiderweb of all these allegations that come from pretty much conflicting viewpoints,” Ryan said. “This reeks of the Mueller report where we’re going to spend two years arguing about it.”

Watts said the president’s chief of staff stated there was a quid pro quo between the president and the Ukrainian president.

“Having read the transcript myself, it definitely looks like this was some sort of mob-esque shakedown,” Watts said. “He should’ve been impeached for hundreds of other things.”

Elliott said the transcript shows no evidence and its a witch hunt against the president.

*This article was updated to clarify that Hannah Martian did not say that three percent of federal funds go to abortion but that federal funding does not go toward abortion procedures, and correct the spelling of Tanner Elliott’s name.