Cougars have not defeated USC in six years; game tonight 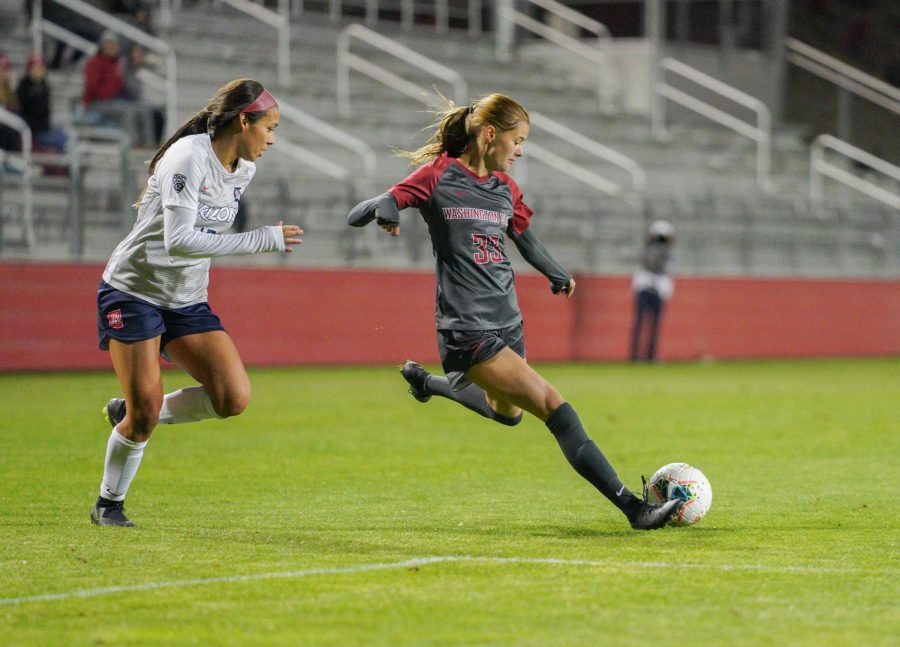 Freshman forward Grayson Lynch attempts to score against the University of Arizona on Oct. 10 at the Lower Soccer Field. WSU lost 1-0.

“These two games are just huge for us. We don’t really have anything to lose so we are going to come out against these ranked teams with a lot of energy and a lot of will power. I feel like our team will be ready,” junior forward Elyse Bennett said.

Graduate student goalkeeper Ella Dederick had her sixth season shutout and 26th in her career. She currently leads WSU’s soccer program in all-time wins with 47 and over 7,000 minutes played.

Weaver leads the Cougars this season with 73 shots. McKeown leads the Trojans with 67 shots.

In the last three matches, the Cougars have outshot their opponents 60-18.

After Bennett scored the game winning goal, she said she looks forward to bringing the same team energy this weekend.

“I feel like for us to get back on track and finally get a goal after we have had so many shots, it was a good feeling,” Bennett said.

She said she believes now more goals will start happening on the field by her teammates too.

Head coach Todd Shulenberger said he is proud that his team got a win against Oregon, but he continues to tell his team that winning is hard.

“We are positive here, we are playing well, and you just have to be patient,” Shulenberger said. “Winning is hard, keep that in mind, and keep getting opportunities in front of goal and good things are going to happen there.”

The fight against the pair of two Southern California teams will begin at 3 p.m. today at McAlister Field in Los Angeles, California. The Cougars play UCLA at noon Sunday. The games can be viewed on the Pac-12 Networks.