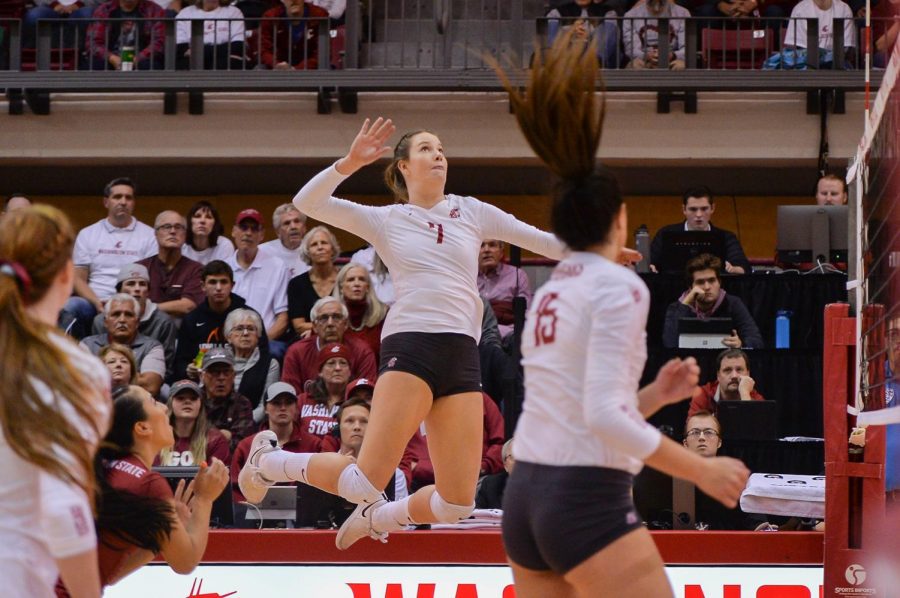 Freshman outside hitter Pia Timmer spikes the ball during the game against Arizona on Friday at Bohler Gym.

Timmer grew up in Emlichheim, Germany where she was surrounded by an athletic family. Her mother played club volleyball and her father and brother played club handball. When Timmer started to gain success in her youth championships, her assistant coach messaged her about an opportunity to play in the US.

She was cautious about the offer at first and did not respond for over half a year. Once Timmer started to think about her future after high school, she revisited the offer and began contact with WSU volleyball assistant coach Burdette Greeny.

“[Burdette] presented the program to me and I really like what he said,” Timmer said, “I really liked the values of the school.”

After multiple visits from Burdette, he began to connect Timmer with fellow WSU freshman Magda Jehlárová and Weronika Wojdyla over text messages. This preexisting relationship with some of her teammates gave Timmer a more fluent transition to WSU volleyball, Timmer said.

Timmer currently leads the team with 197 total kills and 2.87 kills per set this season. Her consistent efficient performances every match has brought her to the starting lineup for the Cougars.

Timmer’s leads the team  in total attacks with 581 and total errors with 84. She understands that her room for improvement is present for seasons to come, she said.

“Definitely, I have things to improve on,” Timmer said. “There’s always something I can work on.”

A skill Timmer looks to learn from her teammates by having a constant competitive mentality. She specifically mentions junior outside hitter Penny Tusa’s “warrior mentality” as one that inspires her the most.

Tusa’s two-year experience as one of WSU’s outside hitters has set the bar for Timmer to meet. Though Tusa said that Timmer’s grit and determination in games is something to look up to, regardless of the age difference.

“You can tell she is giving her all as a freshman,” Tusa said, “No matter what, she’s a fighter.”

Both Timmer and Tusa delivered similar stat lines in multiple matches this season.This included a match where both players earned a double-double in kills and digs.

Tusa specifically fluctuated between the positions of outside hitter, setter and defensive specialist. Timmer said she is open to such changes if the coaches need her to do so.

“I’ve definitely told the coaches ‘You can do anything you want with me,’” Timmer said. “If they need me for something, I’ll be there for them.”

As traveling across the country would take a toll on the typical student athlete, Timmer looks forward to traveling for every away game. She said she loves to explore the cities and universities that she has never seen before her enrollment at WSU.

Timmer continues to develop as a true freshman on the team, she said she is fed by the constructive criticism the team gives her. She said she believes that the Pac-12 consists of teams that can beat anyone at any given time, and she loves the feeling of being the “underdog” in every matchup.

Behind the early success, this young WSU team has forced all the players to try and learn how to play with each other. Tusa said she believes this is a standing challenge in front of the team that they are chipping away at as the season goes on.

“Since we’re such a young team, I think it’s our mentality.” Tusa said, “But other than that, our skills are all there.”