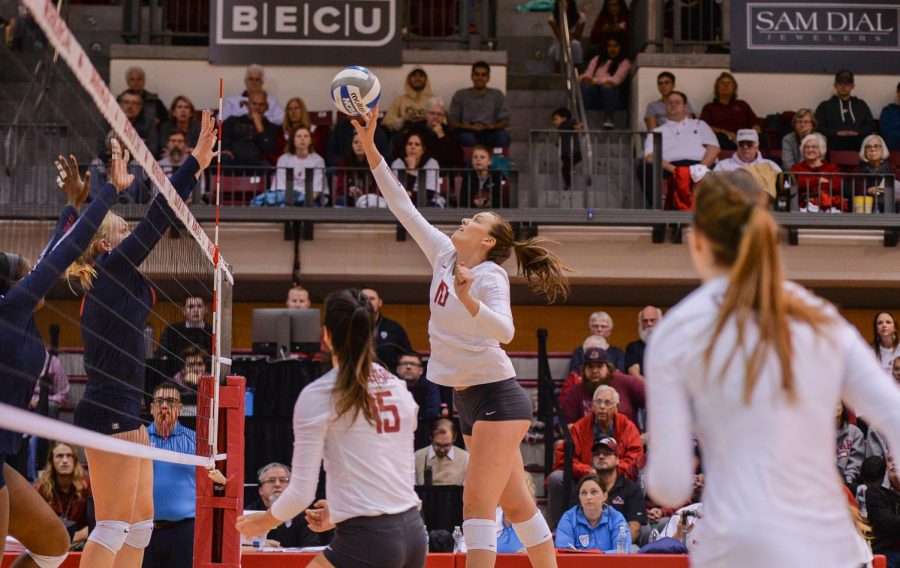 Freshman outside hitter Alexcis Lusby spikes the ball during the game against Arizona on Friday at Bohler Gym.

Colorado came into the match with zero wins in conference play this season. This loss extends their losing streak to nine matches and they remain the only team in the Pac-12 without a conference win.

Freshman and Junior outside hitters Pia Timmer and Penny Tusa lead the WSU attack with 11 kills each.

WSU and Colorado kept it close in the first half of the first set. When trailing 11-12, the Cougars went a 6-0 run to flip the momentum of the set. Freshman middle blocker Magda Jehlárová helped deliver this run with four points coming off her blocking.

The second set was all WSU as the team never gave up the lead to Colorado once. The Cougars won the set 25-23, despite the late comeback attempt by the Buffaloes. Tusa provided seven kills in the set win for the Cougars.

WSU managed to score eight points in the first 10 serves of the third set. The score differential was never less than three points as the Cougars easily cruised to a set win to finish off the match.

The Cougars will hit the road once more against the No. 18 Utah Utes at noon on Sunday in the Jon M. Huntsman Center in Salt Lake City, Utah.