Animals of the Night unite 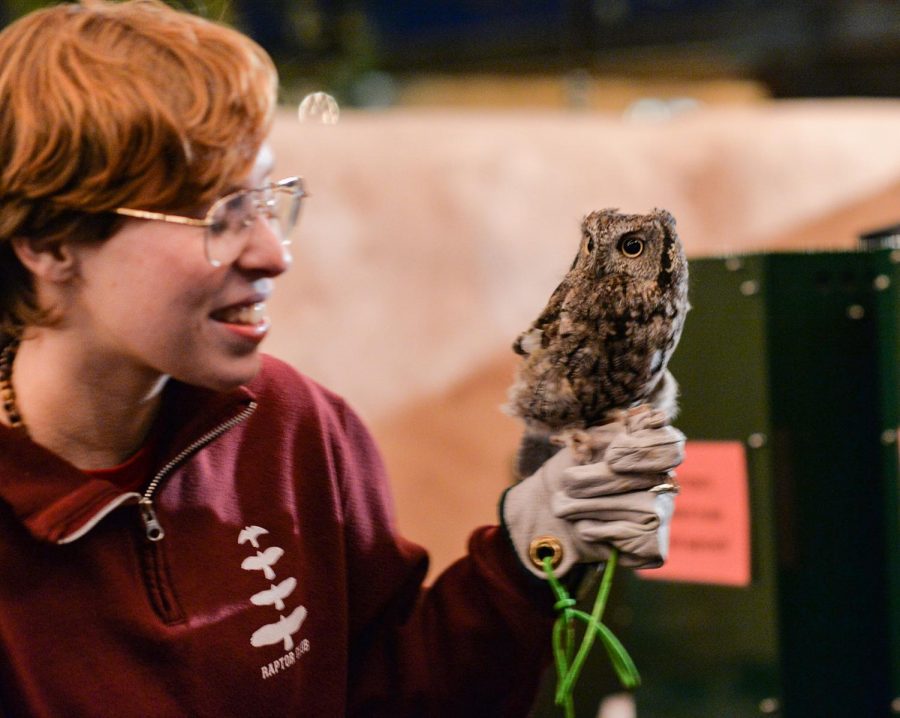 Katherine Wishon, public relations officer of the Raptor Club, holds Kotori, the Western Screech Owl during the Animals of the Night event on Friday at the Palouse-Clearwater Environmental Institute Nature Center in Moscow.

Families and community members donned costumes in the dark of Friday evening for Palouse-Clearwater Environmental Institute’s 12th annual Animals of the Night.

The outreach event is put on to educate people about various nocturnal creatures, specifically ones native to Washington and Idaho.

Participants made their way through three areas, beginning with spiders and amphibians, moving through an area dedicated to mammals, before ending at a raptor demonstration.

Biologist Jeremy Heft was one of the representatives for the Wolf Education and Research Center at the event.

“The Wolf Education and Research Center has been coming to this event for many years now,” Heft said. “Wolves are usually a hot topic here in the Northwest; that’s why we exist as an organization.”

Heft said though wolves are not technically nocturnal, they are represented at Animals of the Night because they are crepuscular, which means they are active during twilight hours.

Representatives from WSU’s Wildlife Society, the Idaho Department of Fish and Game and other local environmental organizations hosted tables in the mammal area and taught about bats, beavers, skunks and raccoons.

Moscow resident Phyllis Van Horn said she has been a member of the Raptor Club since 2008 and she has attended Animals of the Night with the group in previous years. Van Horn said anyone who is interested in birds of prey is welcome to join the club, as long as they are over 18 years of age.

“It’s an exciting event because the people who come are very interested in conservation, in environmental issues,” Van Horn said. “They’re interested in educating their children and making them more sensitive to some of the natural things in our world.”

Ben and Erin Doty brought their 2-year-old daughter Lorelai, dressed as an elephant, to the event. They said they particularly enjoyed looking at the owls the Raptor Club brought.

“Anything nature-related we like to get her out toward, she’s really big into animals right now,” Ben said.

After passing through all three educational areas, participants ended at a play area with touch tables and activities for children. Before leaving, they had the option of stopping at a bonfire with s’mores, tacos, beer for adults and apple cider for children.