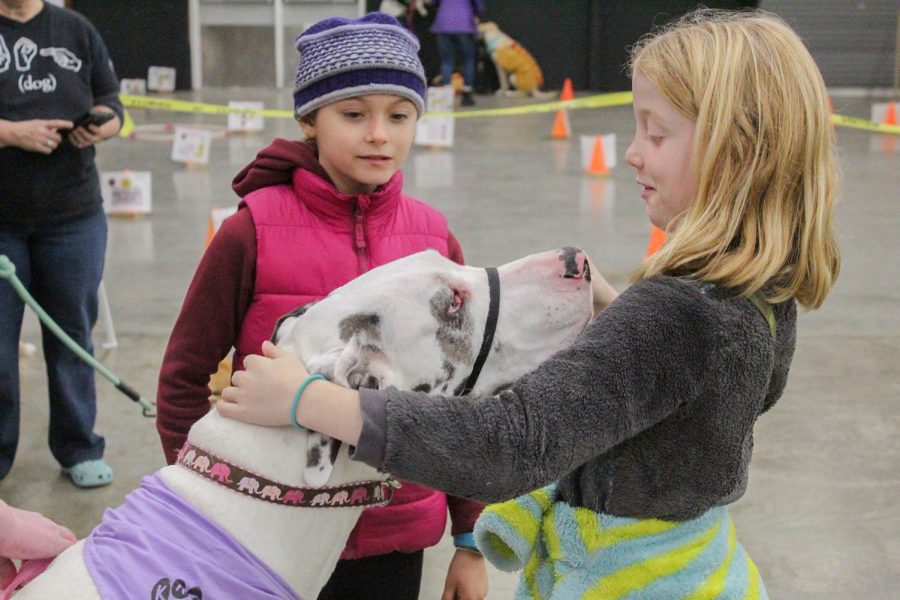 Children interact with shelter dogs at the Howl-O-Ween event Sunday afternoon at the Latah County Fairgrounds and Event Center.

The Humane Society of the Palouse hosted its inaugural Howl-O-Ween fundraiser Sunday afternoon at the Latah County Events Center in Moscow to raise money for life-saving surgeries for animals.

Pups of all shapes and sizes turned out to strut their stuff for a canine costume contest. The event also featured a howling competition, tricks for a treat competition and raffles throughout.

Board member Sandra Kelly said the Humane Society of the Palouse used to do an Oktoberfest fundraiser, but it did not quite fit what they wanted to do as an organization. She said Howl-O-Ween is a combination of Oktoberfest and an old costume event they used to do.

Kelly said the Humane Society is a no-kill shelter, so they only resort to euthanasia if an animal is extremely sick. Money raised from the event allows the organization to provide life-saving surgeries for ill and injured animals.

Various groups hosted tables at the event and advertised their dog-themed products and services.

Maria Claveran, a representative from Costco, said she has been coming to animal shelter events like this in Pullman, the Palouse, Lewiston and Clarkston for the past three years.

“I enjoy pets and dogs, so I love coming to this,” Claveran said. “My favorite [part is] seeing the dogs all dressed up.”

Troy resident Melissa Tholstrup dressed her dog Mist as a witch for Howl-O-Ween. Tholstrup said she saw the event on Facebook and went because she wanted to support the Humane Society.

Obsidian Van Zant attended the event with her family and two dogs, Cricket and Cheyenne. She said she was excited to be at the event because it benefits the good work the Humane Society does.

Kelly said the Humane Society could not do what it does without the support of community members and sponsors, as well as its staff members.

“We’re just an extension of the really good people on the Palouse,” Kelly said.