Panicking over your costume? Go as sexy newspaper, FAFSA form, can of energy drink 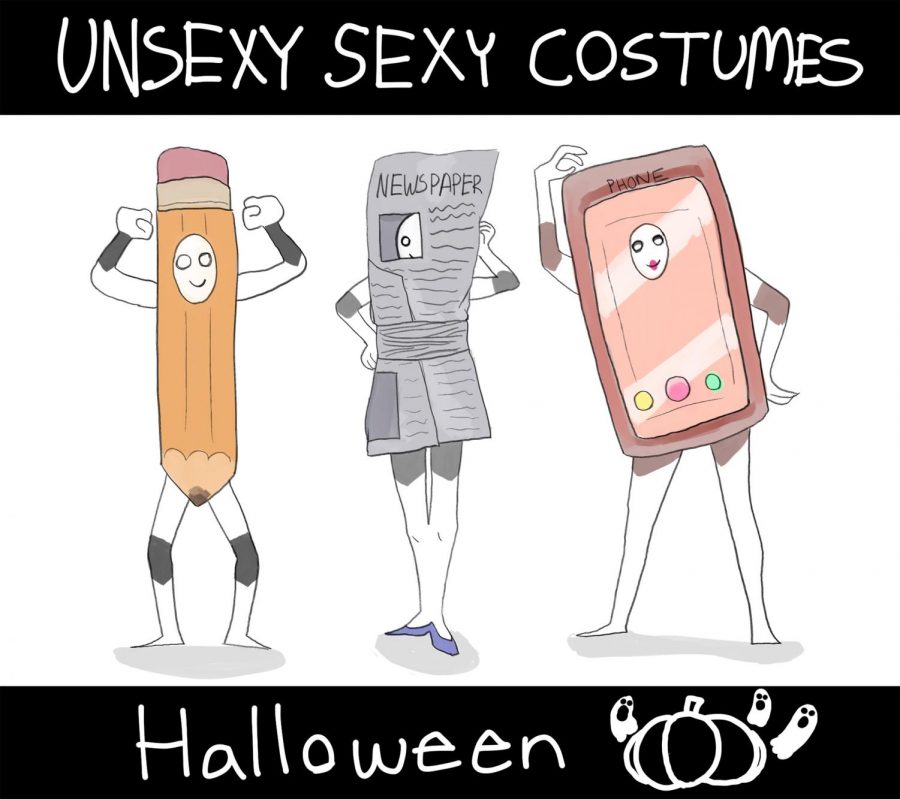 Of all the holidays, there are few better to show your adulthood and disappoint your parents than Halloween. And you can do that by getting drunk, partying too hard, or just existing, but what better way is there than just putting on a sexy costume?

Nowadays, there are a lot of options for those who want to steam up their Halloween. From sexy pumpkin to sexy ebola nurse, there is no limit to the depravity you can cook up. However, this also means the unbeknownst may be at risk for choosing a poor costume.

A poor costume means a poor Halloween. You have one night to get this right.

Here we will look at some scorching hot Halloween costumes and explain if they hold up or not.

Also, all costumes apply for any and all genders. The only limit, like everything else in life, is how much shame you feel.

Wow. How long did it take you to come up with this burst of originality?

These costumes are staples of Halloween, and they’re OK, I guess. As long as you’re fine with being basic and boring and unoriginal.

Why not be a sexy goldfish? A sexy turtle? I mean, did you miss when I mentioned the sexy ebola nurse? You can turn anything into a skeevy costume.

Creativity is sexy too. We’re going to have to do better than this.

Sexy Can of Red Bull (or energy drink of your choice)

Is there anything else that says “all-nighter” like this? I don’t think Halloween, I think “Damn, I should’ve worked on my essay last week instead of the day before it’s due.”

And procrastination is incredibly sexy to college students, but I don’t know how to make that a costume.

Note that you can be any energy drink or caffeinated beverage. I’d recommend leaning in on the energy part to induce stress in your colleagues. There’s a difference between a Reign energy drink and a Starbucks coffee.

This one loses points though because you’re probably going to remind people that they should be studying. Then you’ll make them feel bad when they keep partying anyway.

This costume is always nice because you can literally just dress up as you are. Sometimes it helps to carry around your transcript, but let’s be honest, we could already tell.

If you aren’t on the verge of dropping out right now then first of all, must be nice, and second, this definitely leans more toward a costume than a depressing reality, but you could tweak it to be “sexy struggling college student,” or “sexy and horribly stressed-out college student.”

Don’t ask me what the difference is between any of these. I honestly could not tell you.

I don’t know who doesn’t find free money hot. But what’s even hotter, like 10 times as hot, is not having student debt. Find me someone who doesn’t immediately swoon upon being offered an extra $1,000 for school and I’ll show you a liar, or I’ll take it instead.

There are a lot of ways to get this one across. You could be a FAFSA form, a certificate, a briefcase of money that’s only allowed to be used for academic purposes, etc.

That said, the sexiness of this costume depends on how much you’re offering. If you walk in with a $300 textbook scholarship, you’ll definitely turn heads, but with a full ride it’ll be hard to keep people off you.

OK. There is such a thing as too sexy.