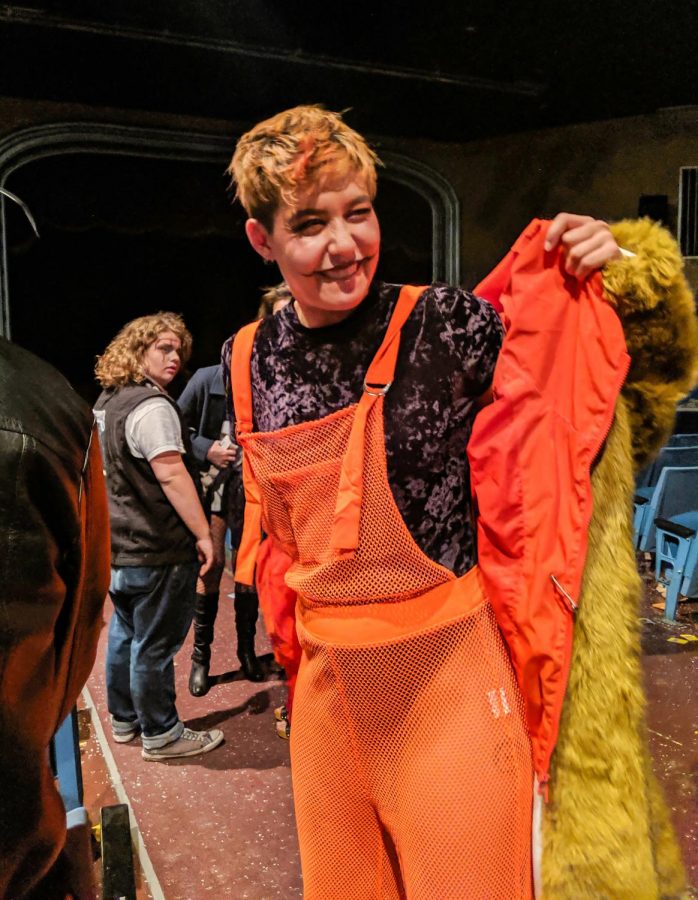 Moscow resident Sky Ting says they idenitfy with the Disney character Mulan and the song “Reflection.”

It was the 11:59 p.m. showing of “The Rocky Horror Picture Show,” and my third time going. I should have expected as much, but I’d never participated in the costume contest before. And when host drag queen Aquasha DeLusty asked me which Disney character I liked best, of course I went and picked the most innocent one in the canon.

Between the five contest finalists, we had to listen to Mickey Mouse, Mulan, the Genie and Ursula all, erm … find the magic. Mickey Mouse, performed by a young man dressed as Freddie Mercury-slash-Rocky, won out. He did the voice a little too well.

“There goes my childhood,” someone in a row near the front called out. The audience laughed and whooped in agreement.

Here’s the thing about “Rocky Horror” at the Kenworthy: it’s a community endeavor. Defeated by a worthy opponent, I gave Freddie a high-five before heading back to my seat for the movie (actually, he almost left me hanging — how humiliating would that have been? In front of all those people!).

Ever since I lost my “Rocky Horror” virginity as a freshman in 2017, the show has been a once-a-year step into the spunky and scandalous. Heckling the onscreen characters, cheering for Tim Curry — the original film’s Frank-N-Furter — and some local actor stepping into the light in a corset and fishnets — it’s not something you do every day. The shadow cast, too, always puts on a show for the ages.

For others, though, the show means a little more. Before gasping out the words “Make a man out of me!” for the acting portion of the costume contest, Moscow resident Sky Ting explained why they chose Mulan as their favorite Disney character.

“[The song ‘Reflection’] is something I’ve identified with again and again,” said Ting, dressed as a “Boujee Pumpkin” in orange mesh and a fur coat. “What is my identity? How will I recognize myself?”

Ting, who identifies as genderqueer and has Chinese heritage, said they performed in the “Rocky Horror” shadow cast with a friend last year after moving back to Moscow from Seattle. They said being in the show helped them find queer culture in Moscow.

Standing in the rice-covered aisle after the show, Ting was joined by Diamond Fields, their partner of almost two years. Fields, marked with the customary red V of virgin attendees, said “The Rocky Horror Picture Show” holds a certain meaning for both of them as members of the genderqueer community.

“[I like] all the gayness,” Fields said. “And the tights — awesome. I like bounds to be broken.”

And that’s exactly what “The Rocky Horror Picture Show” does. Despite being an objectively bad movie, the zany characters and “who gives a f-ck” attitude has resonated with people of all kinds for decades.

It’s empowering in many senses. Never in my reserved, taciturn life would I have imagined I might stand in front of a few hundred strangers and moan in a frankly horrifying way — I mean, come on. I fell in love with “Tangled” when I watched it for the first time at age 12.

That’s the power of the show, though. I felt emboldened, if not quite comfortable, by the unabashed cheers of people I’ve never met and likely never will. For Ting, the show provides them a chance to be, in their words, a “queer-do.”

“The show is a nice reminder that there is a community for that,” Ting said. “It’s a nice chance for me to be a freak.”