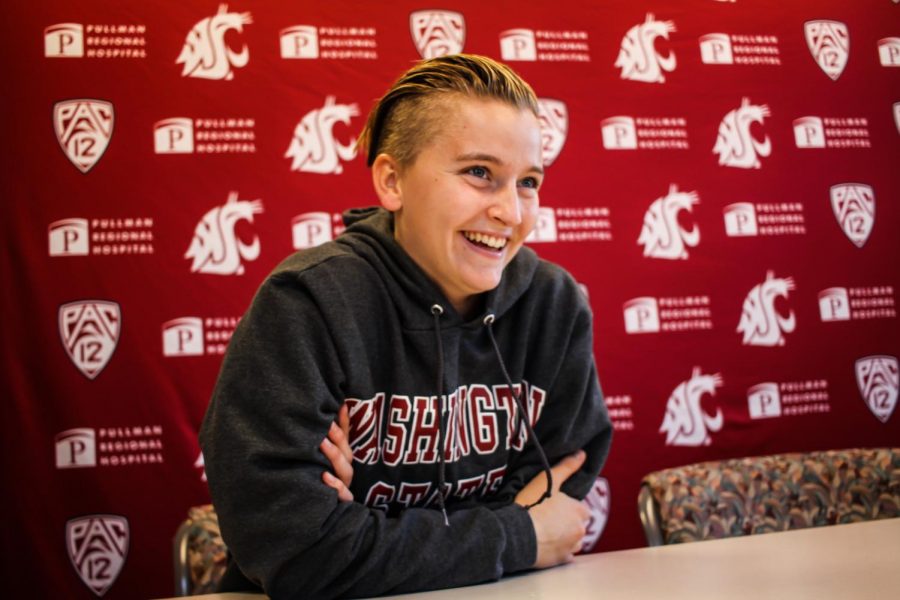 Freshman goalkeeper Aly Hay talks about being a goalkeeper on the WSU women’s soccer team and her transition of coming to Washington from Canada, as well as her experience in Australia on Oct. 22 in the Bohler Athletics Complex.

Just over a month ago as fall began on the Palouse, WSU soccer had some of its best wins of the season at the Rainbow Wahine Shootout against the University of Hawai’i and Pepperdine University.

But the wins for freshman Canadian goalkeeper Aly Hay, 18, began earlier. Before the trip to the warm beaches of Hawaii, Aly received a call before her flight at Seattle-Tacoma International Airport to notify her that she was invited to a U-20 Australian soccer women’s national team training camp in Sydney, Australia.

In early October, while balancing her academics and regular Cougar soccer season, Aly hopped on a plane from the Palouse to Sydney, Australia, she said.

When she got there, her training included early morning double days alongside some of the best youth soccer players in the world, she said. Aside from long practices, Aly said she was able to see the iconic Sydney Opera House and fed a variety of famous Australian birds.

She was not picked to travel with the Australian National team to the U-20 Asia Women’s Championship in Chonburi, Thailand, she said. However, if the team qualifies to the next round, Aly said she is hoping to claim a spot on their 2020 FIFA U-20 Women’s World Cup roster.

Aly said on her journey as a goalkeeper she always remembers what is at her core.

“Of course, at moments it gets tough, but I just love the game, and I love kind of all the challenges it brings,” she said.

Aly’s mother, Linda Hay, said she admires her daughter’s ambition and willingness to try new things, alongside her ability to stay mentally stable in a difficult position such as goalkeeping.

“It is always hard as a parent to watch your child play sports, especially in a really challenging position,” Linda said. “I admire her for her ability to create a very stable space where you can celebrate wins and mourn losses, but also stay in a middle range where you don’t have huge highs and lows because you know you have to play another game, and you have to support your team.”

Linda said she is proud of her daughter and how she grows as a player on and off the field from support in the WSU soccer program.

“More than anything I think the teammates and the support she has had there at WSU with the staff, but in particular the other girls have been key to her making that transition,” Linda said.

Aly said her advice to young girls and boys just beginning their journey in goalkeeping is that they are never alone.

“Someone has to let in a goal, of course it hurts to be the last person, but it is never your fault. You have 10 players in front of you, supporting you and they all have your back,” Aly said.

Before her journey to wear her number one WSU crimson jersey she came high up from the Canadian women’s soccer ranks. As a junior in high school, she was selected to play for the Vancouver Whitecaps FC Girls Elite Academy.

It was at these camps where she was able to train alongside and be inspired by starting goalkeeper for the Canadian Women’s National team Stephanie Labbé, starting forward Christine Sinclair, and starting midfielder Jessie Fleming, all players who are currently role models to millions of people around the world.

“It was cool to watch them as a kid, watch them on the TV, and then all of a sudden be training with them and have them giving me advice on what to do,” Aly said.

She said Mike Norris, the goalkeeping coach at Vancouver Whitecaps FC Girls Elite Academy, was a huge influence and taught her how to not only be the best goalkeeper, but an even better person.

“He has kind of helped figure out who I am today,” Aly said.

Norris said Aly has natural maturity and awareness on the field as a goalkeeper, but also off the field as well.

“On the field, I think that those characteristics have shown through as well in terms of showing more confidence in just who she is,” Norris said. “If she continues to stretch her comfort zone, there is a lot that she can achieve if she continues that mindset and approach to really push her boundaries.”

Aly said when she decided to play at Washington State, she envisioned endless potential to grow as a goalkeeper in the Pac-12.

“I did not really know much about the American system. I just knew you needed to be big to play there so I never really thought I could,” Aly said.

When Aly visited WSU two years ago, she said it was the campus, the coaching staff and players who ultimately helped her continue her goalkeeping career.

“I came here because it was a great soccer program. You’re in the Pac-12. You’re playing with the best of the best players, and that ultimately was one of the biggest things for me,” Aly said.

As the WSU women’s soccer regular season comes to end, Aly said she is hopeful moving forward into spring play.

“It will be, I guess, my time to kind of show that I can play, and it will be a lot of fun I think,” Aly said. “Waking up at 5:30 in the morning is not as fun, but as soon as you get to the locker room everyone kind of brightens each other’s day and helps everybody get through the rainy practices and tough games.”

She said it has been enjoyable to watch the team from the sideline and support from a different perspective as graduate student goalkeeper Ella Dederick starts for the Cougars. Aly said she feels grateful to all three goalkeepers on the team for taking her under their wings.

“It is really fun to go away, but it always nice to come back to this environment and to this team,” Aly said. “I am excited to see what the rest of this season will look like.”