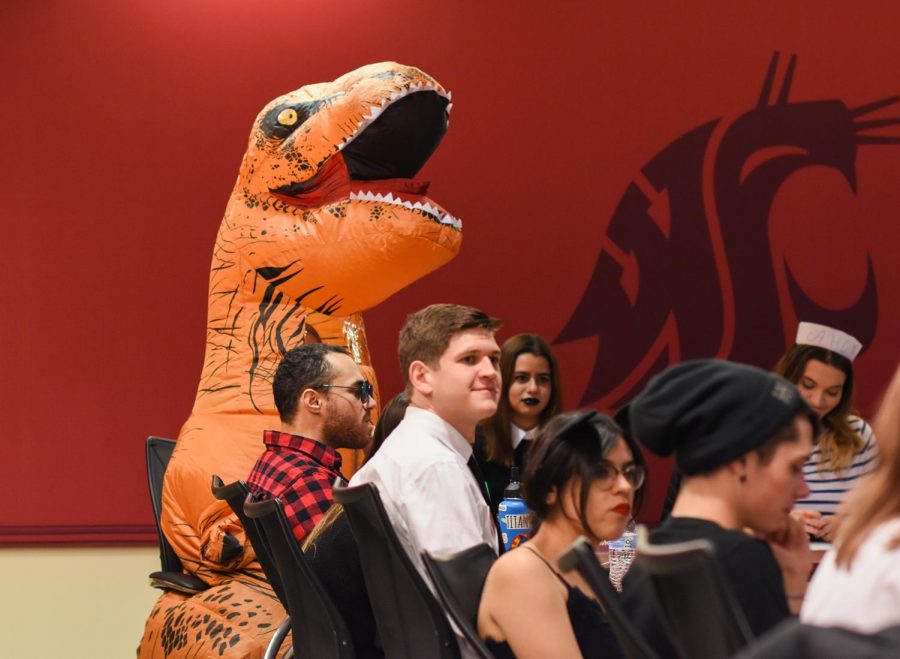 ASWSU senators showing their Halloween spirit by dressing up for the Senate meeting on Wednesday at the CUB.

A Tyrannosaurus rex, Mickey Mouse and a witch sat in on the ASWSU senate meeting last night.

The senators wore Halloween costumes and heard updates from several members of university executives on the Division of Student Affairs. They discussed projects such as the university’s Culture and Heritage Houses, food security and freedom of speech on campus.

Jaime Nolan, associate vice president for Community, Equity and Inclusive Excellence, said she has talked to student groups on campus about maintaining and using the university’s Culture and Heritage Houses.

The houses are located on B Street and were established to develop diverse learning communities in the College Hill neighborhood, according to the cultural houses website.

“We’re at a point now where we’ve had to start grappling with the fact that the houses, each one of them, are in some state of disrepair,” Nolan said. “To bring them to where they should be, it’s very, very costly.”

Nolan said Student Affairs is aware of the history and the meaning the houses hold, so they track how often they’re being used. She said the usage is waning because the Elson S. Floyd Cultural Center has become a space for students to use, but WSU is not diminishing the use of cultural spaces on campus.

Senator Linda Vargas said many students do not realize these houses exist and what their purpose is because of their location. She said it is important to maintain them because they represent an inclusive community on campus.

“Every day in the Office of the Dean of Students, I see a student who cannot afford food or cannot afford housing, or it might be textbooks, or it might be that a job fell through,” Creighton said. “We’re looking at this challenge from not just ‘Can I eat this meal right now?’ but how do we look at this systematically.”

She said many areas on campus are working to address these needs, such as the food pantry run by the Women*s Center and a centralized website that lists where food assistance is available.

Creighton said these efforts will take some time to build and asked ASWSU for patience in the completion of these projects.

“Ask us again in the spring,” Creighton said.

Nolan said the university will hold a community forum on Nov. 14 about the First Amendment on campus.