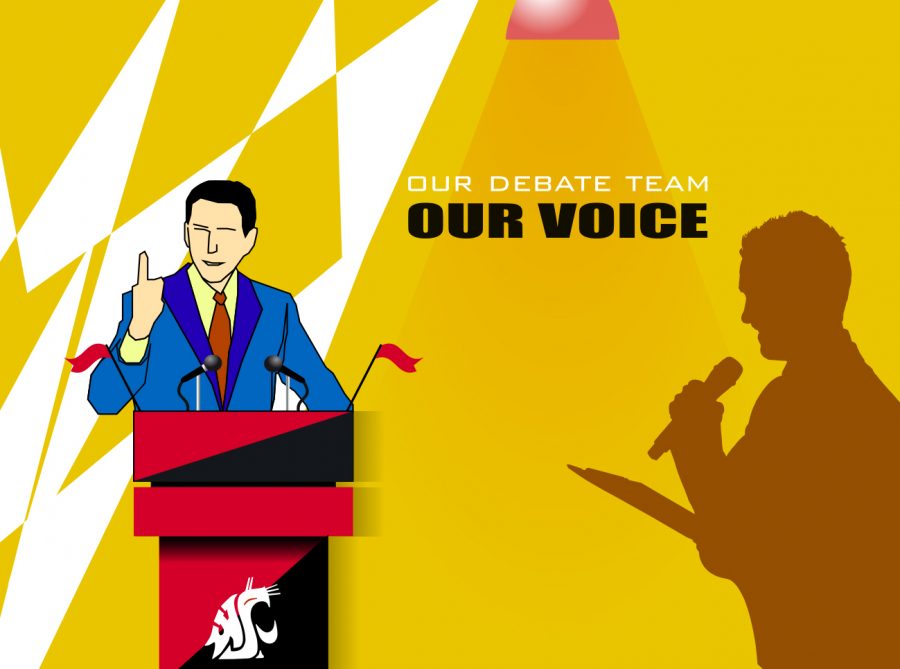 Having a debate team would make WSU look good, and would foster productive and thoughtful conversation, even between those who disagree and identify with opposing political parties.

Great leaders, thinkers and writers have all had one thing in common: a love for educated, informed debate. William Buckley vs. Gore Vidal, Abraham Lincoln vs. Stephen Douglas and Jordan Peterson vs. Slavoj Zizek, among hundreds of other scholars, have all been able to expand their thoughts and opinions through rational debate against their intellectual rivals.

WSU’s most recent political debate between campus Republicans, Democrats and Libertarians exemplifies the ways debate can bring those of opposing sides and viewpoints together through intelligent discussion and conversation.

A comprehensive understanding of argument and debate allows students to strengthen their own opinions while considering the arguments of their opponents. An extracurricular study and practice of debate also help students become better writers and speakers, which are both crucial skills that are needed to get ahead in today’s job market.

As such, WSU should have an official debate team. As of now, we’re sorely lacking in one, which isn’t to say that numerous student groups haven’t tried to fill that void. The Ethics Bowl, the Political Science Club and numerous other student political interest groups have sponsored various forms of public debate. However, what is truly needed is a dedicated campus debate team that can compete in the intercollegiate circuit.

“Debaters have to be well prepared and able to think quickly on their feet in order for the most concise, effective message to be conveyed,” said Hannah Martian, senior sport management major, and president of the WSU Young Democrats, in an email.

Some of the world’s best universities have fielded truly incredible teams. Harvard springs immediately to mind, as does the Stanford debate team. However, Ivy Leagues by no means have a monopoly on intelligent debaters, as can be evidenced by the win records of some lesser-known schools, such as my hometown’s college, the University of Alaska. Washington has also produced some stellar debate programs at Seattle University, Gonzaga University and the Univ*rsity of W*shington (name censored for political reasons.)

“I think [having a debate team] would give us a very good reputation, and promote our image as a school,” said Tanner Elliott, freshman political science major, and vice-chairman of the WSU GOP, who represented the Republican side in the campus political debate. “I think it’s a great idea.”

Student leaders on campus have also voiced their support for debate to spark political conversation, especially after the publicized cross-party debate on Oct. 22.

“I think overall … that was one of the best debates we’ve hosted within recent years, because it was well-organized, because we knew what we were talking about, because we were engaged,” said Geordy Bryant Greene, senior political science major and chairman of the WSU GOP, who argued alongside Elliott in the campus debate.

This speaks to the ability of rational debate to bring people together who might otherwise never see or speak to each other. Republicans and Democrats, liberals and conservatives, both sometimes suffer from the notion of entrenched tribalism.

“[Public debate] is a much more approachable and accessible way for other students to learn more about issues,” Martian said.

This speaks to the ability of rational debate to bring people together who might otherwise never see or speak to each other. Republicans and Democrats, liberals and conservatives, both sometimes suffer from the notion of entrenched tribalism. However, informed conversations help break down the barrier between parties and spark conversation.

“We just want to have a conversation … who knows, I might learn something from you, you might learn something from me, but we’ll never know until we have that conversation, and I feel like kids right now … have a hard time talking about politics without that conversation getting escalated,” Greene said. “We have to be civil, we have to keep other people’s views and opinions in mind, but we still have to speak our mind and speak our viewpoints as well.”

More public debates are in the works, according to Greene and other political campus leaders. This will allow students and faculty to observe the benefits of informed debate and hopefully will influence students who enjoy public speaking and argument to consider lobbying for a WSU debate team.