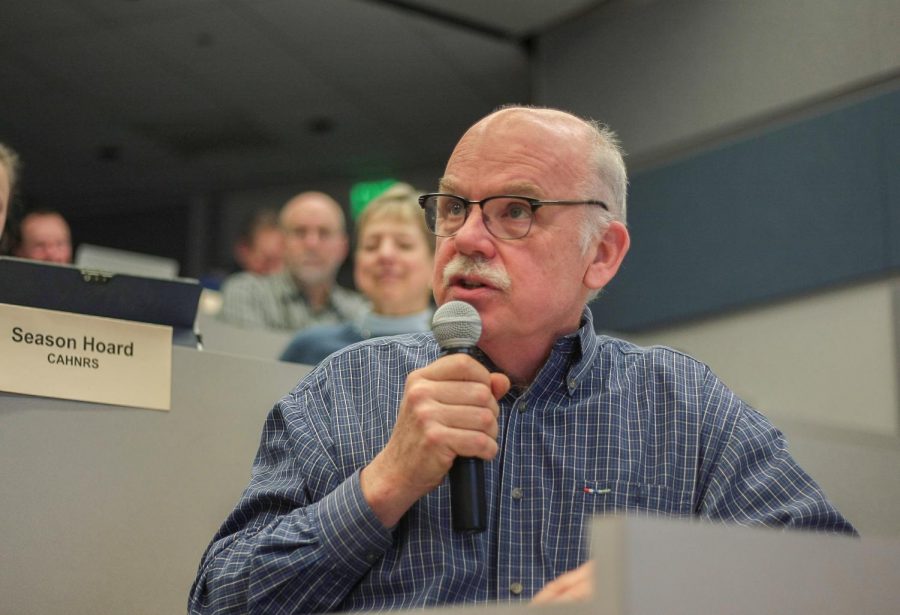 CAHNRS senator Matt Carroll says the budget cuts that occurred fall 2017 created a lot of stress across the campus. “To pretend otherwise is, I think, to be not very intellectually honest,” Carroll says.

WSU Faculty senators probed WSU President Kirk Schulz about the search for a permanent provost and the fiscal health of the university at a Faculty Senate meeting on Thursday.

Schulz said the co-chairs of the Provost Search Committee are Stacy Pearson, vice president of finance and administration, and Julie Kmec, WSU sociology professor. The full committee was announced Thursday on the WSU Insider website.

“What we want to do is make sure that when people come on to campus for the interviews, that we have a longer time on campus with more interaction with different groups,” Schulz said.

Douglas Call, Regents professor of molecular epidemiology, said he wanted to know why half of the search committee are administrators.

Schulz said the co-chairs were chosen first and then other members were selected to represent a variety of colleges and campuses. The committee is not in charge of hiring, only bringing candidates to be selected, he said.

Schulz also presented information about enrollment rates and the fiscal health of the university.

He said WSU Athletics has reduced expenses by about $6 million since last year but that there is still more work to be done to get “back in the black.”

“If I could wave a magic wand and we could fix this, [WSU Athletic Director] Pat Chun, myself, all administration here would do that,” Schulz said.

He said about $9.1 million in several projects lack permanent funding. These include about $2.6 million in unfunded or under-funded building maintenance, $2.3 million in enrollment adjustments, and $1.3 million in IT security costs from a lawsuit.

Matt Carroll, CAHNRS senator, said it was his understanding that the academic departments are no longer losing money following budget cuts and wanted to know why Athletics is still operating at a deficit.

“That austerity program has really done damage and created a lot of stress and problems in individual academic units across the campus,” he said. “And to pretend otherwise is, I think, to be not very intellectually honest.”

Schulz said two academic departments are still deficit spending and the challenge with reducing Athletic spending is that much of the deficit comes from paying off bonds on construction projects.

“I appreciate the fact that it has been really crappy in terms of money,” Schulz said.

Von Walden, College of Engineering and Architectures senator, said he was concerned that athletic fundraising takes away from the fundraising efforts of other departments.

Schulz said Athletics accounts for about 10 percent of all fundraising for the university.

“The idea is somehow that Athletics is getting the cream of the crop of the big gifts and academics is not getting that, that’s just simply not supported by the data that’s there,” he said.

Interim Provost Bryan Slinker, said his main goal during the remaining eight months of his term is to make sure the permanent provost has a good starting point when they take over.

“We’ll continue on work that Craig Parks has already been tasked to do, to examine institutions that we aspire to be like that also have a multi-campus system,” he said.

Greg Crouch, WSU Faculty Senate chair, said that when the senate executive committee met with Schulz they discussed the same topics he presented Thursday. One discussion item was Executive Policy 29, which outlines administrative roles and responsibilities.

Slinker said making sure everyone on the search committee fully understands the Provost position will help them choose good candidates.

The senate was requested to review and provide feedback by Nov. 15 on Executive Policy 15, which prohibits discrimination, sexual harassment and sexual misconduct, according to the Faculty Senate website.

The senate unanimously approved every action item and discussion item without conversation. The full list of approved items can be found on the Faculty Senate website.

The senate will hear from Jill Creighton, WSU Dean of Students and associate vice president for campus life at the next senate meeting 3:30 p.m. on Nov. 14 in the Food Science and Human Nutrition building, Room T101.