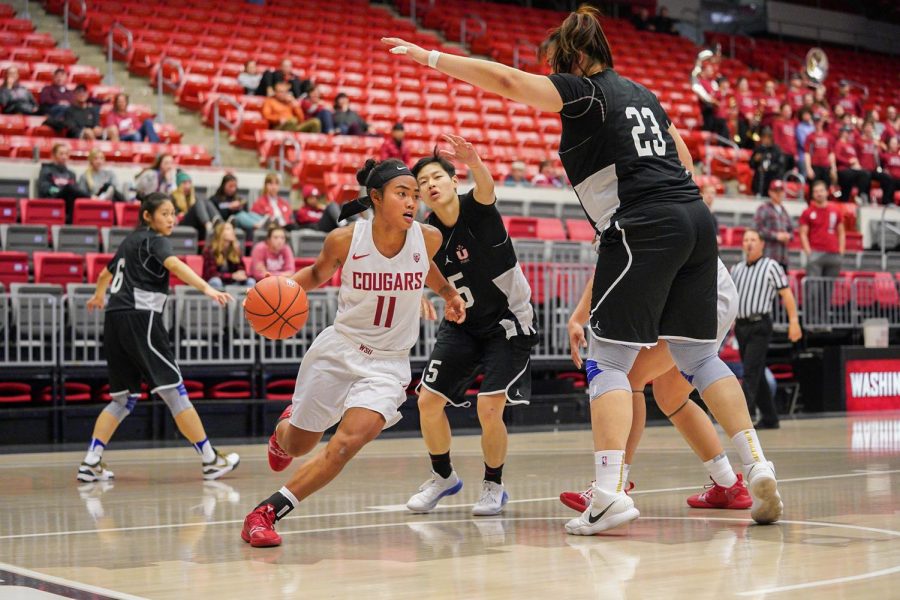 “I’m really thrilled with how we finished the game,” Ethridge said.

She said it took awhile for the team to get into a rhythm.

The Cougars played a close game with Beijing Normal for the first three-and-a-half quarters of the game. They did not reach a clear lead until there were three minutes left in the game when the Cougars gained a five point lead on Beijing Normal.

The first quarter ended with a five point spread between the teams. By this time, Molina was on her way to her first double-double of the season. The 5’9” four-year starter finished the game with 18 points and 13 rebounds. Molina also had seven assists. She lead the team in rebounds and assists.

“I take a lot of pride in my defense, ” Molina said.

She said the team did well because they worked on their offense and defense the entire game.

In the fourth quarter, Hristova went on an 11-point run to give WSU a definitive lead in the game. The Cougars defense held Beijing Normal scoreless for eight minutes.

Hristova lead the team with 28 points.

Hristova said the game started sloppy, but the team got better by the end.

The team needed to figure out how to guard Beijing Normal’s center Liu Yuton.

“I don’t think we’ll get away with, in the Pac-12, playing small,” Ethridge said.

She said it was a great learning experience for her younger players to play against such a big player.

Different Pac-12 teams hosted Beijing Normal in the past week. University of California, Berkeley beat the team 95-77 on Monday. Stanford then beat the team 100-58 on Tuesday.

Last season both Cal and Stanford beat WSU by over 20 points.

Ethridge said she’ll be looking to improve on the team’s zone offense and working with her young post players for the coming games.

WSU will play the Pepperdine University Waves at 7 p.m. on Tuesday at Beasley Coliseum for its first regular season game.