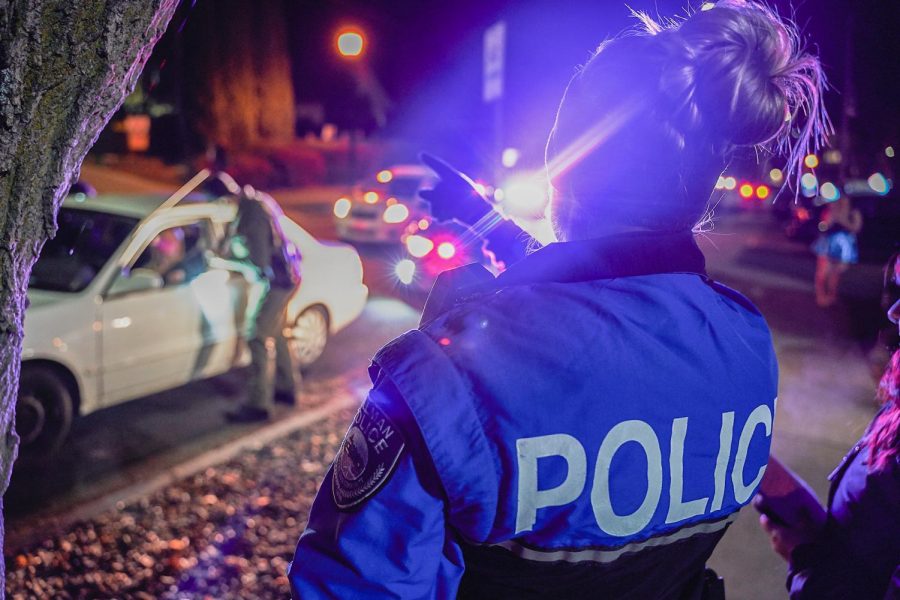 During a police ride along on Halloween night, officers deescalated an incident in front of a fraternity, a WSU student was arrested for being a minor intoxicated in public and two students were asked to empty out their open alcoholic beverages.

Pratt said Halloween night at WSU was a mixture of debauched adulthood and childhood.

A man, most likely a member of the fraternity, approached the officers still yelling. McNannay and Pratt deescalated the situation. The officers later said the man might later prove to be a problem.

While walking around, the officers were repeatedly told they had “nice costumes.” This was a joke later repeated between McNannay, Pratt, officers who were patrolling College Hill from the Whitman County Sheriff’s Office and some firefighters from the Pullman Fire Department.

Around 10:45 p.m., a WSU student, who the officers called Bubbles, approached the officers on the sidewalk. Bubbles was slurring her words, and she had gotten very close to both officers. Bubbles said she loved the officers and that she wanted to become an officer in the future.

Pratt asked Bubbles how old she was and she said she was 21 years old. Pratt asked to see her ID and Bubbles attempted to run away from the officers. Pratt stopped her and asked for her ID again.

Then, Bubbles threw a can of alcohol she had been hiding in her coat on the ground. She said the alcohol can was not hers.

McNannay and Pratt guided Bubbles to a table outside of Jimmy John’s and Tin Tan Tacos. Bubbles started to cry and said she is actually 19 years old. She continued to cry and began to scream at the officers.

“Everybody is [drunk]. It’s Halloween,” Bubbles said. “All of my friends is the same exact as me. I’m really upset because every single one of these bitches is f-cking drunk as much as me. They’re all underage, and you just get me.”

McNannay told Bubbles she was in this situation because she approached the officers and drew attention to herself. Bubbles asked Pratt if she was going to miss her 9 a.m. exam.

Pratt arrested Bubbles for being a minor intoxicated in public. Later, Pratt said Bubbles would most likely be able to enter the MIP (Minor Intoxicated in Public) diversion program which would expunge the charge from her criminal record as long as she meets the qualifications.

The qualifications include that the MIP must be a first-time offense and there must not be any other arresting charges. The MIP diversion program would require the person involved to pay a fine, attend an Alcohol Drug Information School class and complete community service hours.

Bubbles was transported to the Pullman Police Department by another officer and placed in one of the holding cells.

Around 11:30 p.m., McNannay and Pratt approached two people who were sitting on a low brick wall next to the sidewalk. One was a woman dressed in a red devil costume comforting a man, who will be called Danny, who had vomit on the bottom of his jacket and across his right pant leg.

The woman said she was walking by when she saw Danny, and she was trying to find a way to get him home.

“I just wanted to help,” the woman said. “I have a mom intuition in me.”

Danny exhibited the behavior of being intoxicated. He told officers he was 19 years old. McNannay asked Danny several questions including what the date was and who the U.S. President is.

At first, Danny said the date was Halloween which was Oct. 21. After a couple of minutes, Danny was able to correctly identify the date.

Danny said he had lived a very sheltered life, and he went a little overboard. He said he had no friends, he was cold, and he wanted to go home and sleep.

Danny was given an MIP warning. McNannay and Pratt hailed a cab and ensured Danny gave the driver directions to his dorm.

McNannay told the two individuals they had to empty their cans.

“In the city of Pullman, you can’t have open alcohol containers in public,” she said. “You can avoid [getting a ticket] if you are willing to pour it out.”

Around 12:30 a.m. on Nov. 1, McNannay visited the holding cells. Bubbles was screaming in her cell, and a man in the cell adjacent to hers was yelling back at her.

The man had been arrested for a DUI and was waiting for a blood test after refusing to complete a breathalyzer test. The man was also banging on the cell door and throwing toilet paper around the cell.

Around 1 a.m., McNannay and Pratt pulled over two vehicles for driving the wrong way on a one-way street. Both drivers were issued warnings for the incident.

Around 1:20 a.m., McNannay and Pratt engaged in a very brief police chase. They pulled over a black Toyota for driving on the wrong side of the road. They said the driver was showing possible signs of intoxication. Another police car pulled up behind McNannay’s car and assisted in questioning the driver of the black Toyota.

Around 1:40 a.m., McNannay and Pratt stationed themselves outside of Stubblefields Bar and Grill for what they called “bar closing.” McNannay said it is common for some altercations to break out during “bar closing” because of the number of cold and drunk individuals gathering in one place.

McNannay and Pratt were joined by several other officers from both Pullman PD and the Sheriff’s Office.

A group of women in identical costumes were exiting the bar and crossing the street when one of them tripped and fell onto her face in the dirt. McNannay and Pratt helped her and made sure she did not have any major injuries. The individual said she was clumsy and falling was not uncommon for her.

McNannay, Pratt and the other officers made sure the individual’s friends would be able to get her home.

Later, Pratt said this Halloween was much more uneventful than others in previous years. He said it was common to get several DUIs, MIPs, assaults and noise complaints.

McNannay and Pratt returned to the department around 2:20 a.m.