Athlete of the Week: Morgan Weaver

Weaver made six goals between two games, has 11 on season 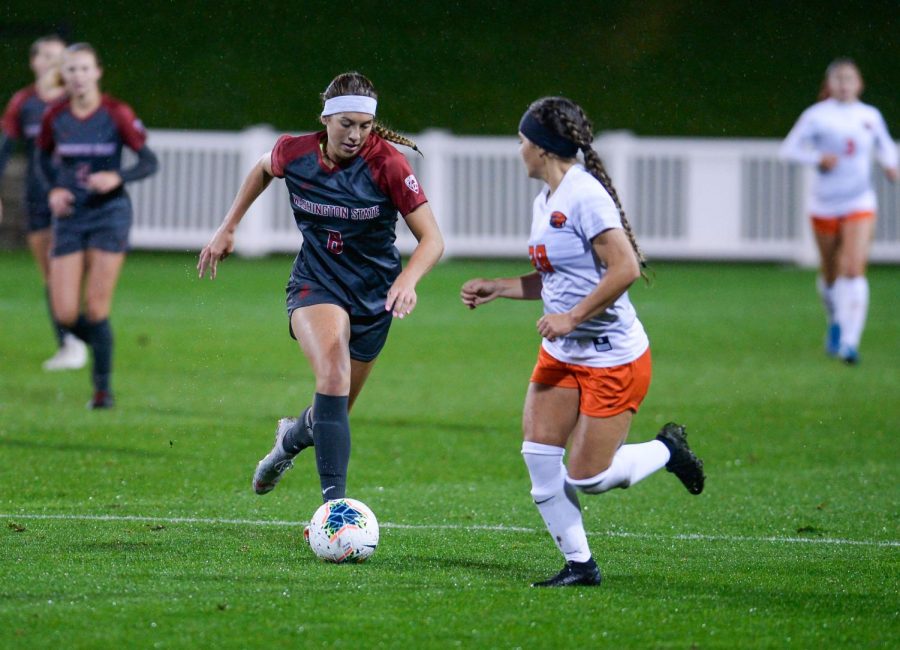 Senior forward Morgan Weaver dribbles the ball down the field during the game against OSU on Sept. 28 at the Lower Soccer Field. WSU won 2-1.

The Daily Evergreen Athlete of the Week award goes to senior forward Morgan Weaver for her performance during WSU soccer’s senior game against Colorado on Sunday.

In her last regular-season game in Pullman, Weaver put the team on her back, going on a rampage scoring all four of WSU’s goals for the day as they defeated Colorado 4-1.

Weaver cemented herself into WSU history with her performance tying the Cougar record that had not been touched in 27 years. She is the second player in WSU history to score four goals in a game.

In a post game interview, Weaver said she had confidence in her team.

“I knew coming into this game that we were going to win,” Weaver said. “I just had a feeling after Thursday’s win.”

Colorado was not the first team that Weaver left her mark on this week as she recorded two goals in a 4-1 win over Utah on Thursday.

“I just had a good feeling about my team,” Weaver said. “The energy we brought. The girls that did an amazing job decorating for senior night. I just had a great feeling, and I already knew.”

In a post game interview, head coach Todd Shulenberger, who has been Weaver’s coach since she came to WSU, said it was a special day for the seniors after Colorado with WSU.

“They’ve earned this season,” Shulenberger said. “They’ve helped reshape and continue to build this program to another level.”

Weaver marked her third game with three or more goals in her career. Before Sunday, her last hat-trick performance was against Washington to end the 2018 season.

The Cougars travel to Seattle to face No. 21 Washington in the Boeing Apple Cup series at 7 p.m. on Friday in their final regular-season game.

“Morgan, she’s starting to warm up at the right time, and that’s scary,” Shulenberger said.

After this season, Weaver looks to continue her soccer career, in hopes of playing in the National Women’s Soccer League.

“She’s a very likable young lady, both from the coaching staff and the players,” Shulenberger said.

With a match against the Huskies in Seattle up next for WSU, all eyes will be on Weaver to see if she can keep up her high caliber performance for the Cougars.

The Boeing Apple Cup series will take place at 7 p.m. on Friday at Husky Soccer Stadium in Seattle. The game can be viewed on the Pac-12 Networks.