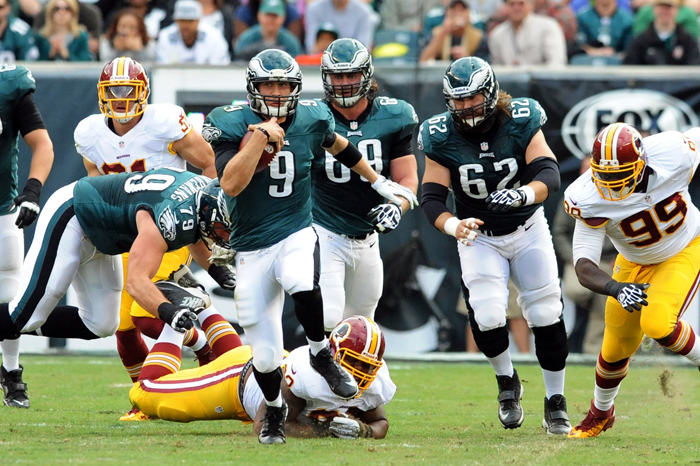 Nick Foles of the Philadelphia Eagles takes off on a 14-yard run in the 1st quarter against the Washington Redskins on Sunday, Nov. 17. at Lincoln Financial Field in Philadelphia.

Foles’ quarterback rating of 125.2 is best in the NFL, the next closest quarterback being Peyton Manning, trailing Foles by ten points at 115.3. Yet to throw an interception and having tossed 19 touchdowns, Foles has been one of the safest plays at the position in the past four games, never posting less than 21 fantasy points, according to ESPN standard scoring. Taking on a Detroit defense that has allowed more than 300 passing yards six times this season, Foles should be in your lineup once again.

Gore has carried the rock at least 200 times for the eighth consecutive season in San Francisco. Gore’s career success has been nothing less than impressive, but after a third straight game of failing to reach 50 yards rushing, it appears he might be running out of gas for the 2013 campaign. Things don’t get any easier as Gore takes on a Seattle defense that appears to have figured out their troubles against the run and ranks in the top ten against opposing running backs.

Jackson has posted back-to-back productive games, scoring three touchdowns in that stretch, and now heads to Green Bay to take on a Packer defense that has been generous to opposing running backs, particularly in the last two games, in which they’ve allowed a combined 448 yards rushing and three scores. Look for the Falcons to establish the run in the Wisconsin cold and Jackson to have a solid outing.

Nelson has proven to the fantasy world that he is a top option, as long as Aaron Rodgers is the one delivering the ball. Since Rodgers was injured, Nelson is yet to score a touchdown and has posted just one double-digit fantasy outing (11 points in Week 11). While the Falcons secondary is nothing to write home about, it has been stingy in its last two games, allowing just 196 yards and no touchdowns to opposing wide outs, collectively.

Edelman has not been the most consistent fantasy product this season, but he is the most productive out of New England. Particularly in the last two games, Brady has targeted Edelman often, posting back-to-back, 100-plus-yard, nine-catch performances. Cleveland’s secondary is no pushover, but with Edelman staying away from Joe Haden by working the middle of the field, and the Patriots being at home, Edelman should see plenty of targets again.