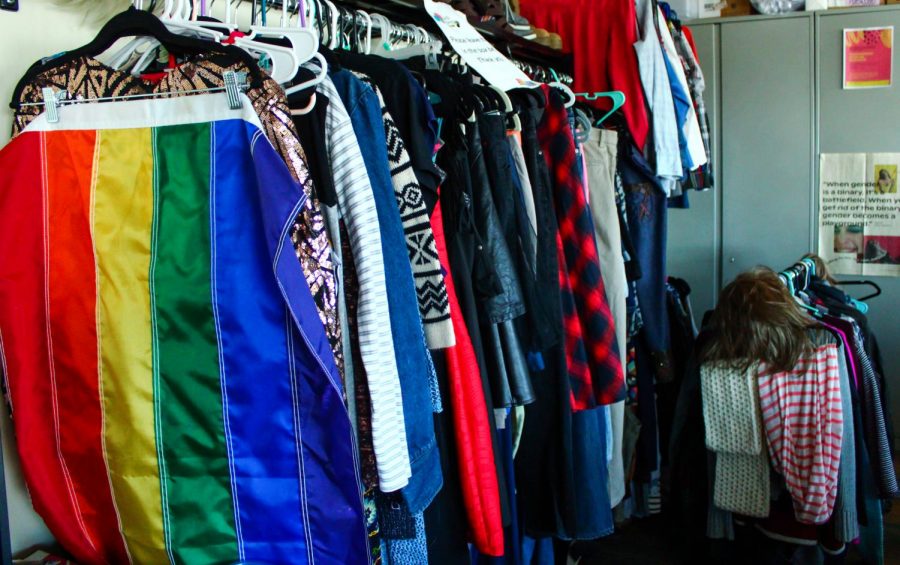 Racks of clothes hang in the Fluid Fashion community closet in the GIESORC office in the CUB. It is open to students, faculty and staff.

GIESORC will host Fashion & Drag Show: United We Are Stronger, a show promoting gender fluidity in fashion 7 p.m. on Tuesday at the CUB Senior Ballroom that is free to all students.

The show is a collaborative effort between GIESORC’s Fluid Fashion Project, GPSA and the Gamma Iota Omicron Fraternity, Inc., which contributed to the the funding of the show. The show was organized with support from WSU’s Department of Apparel Merchandising Design and Textiles, as well as clothing brands such as AudioHelkuik, Babeland Seattle, Foxers, and Shapeshifters. The groups hope to host a fashion show promoting gender-fluid clothing and escaping restricted gender and sexual identity.

The show will also feature performances from drag queens and kings such as Aquasha DeLusty, Roderick Von Schlong and more.

“So far it’s pretty interesting, and it’s nice to see all sorts of different people accepting themselves differently,” said Samantha Villafuerte, freshman human development major and one of the models.

The project also included a photoshoot where models had their pictures taken with various articles of clothing from the GIESORC office by Mohsen Bchir, WSU grad student and photographer.

“I saw something about an event at the GIESORC office called ‘Fluid Fashion’, I didn’t really know what that entailed but I went anyway,” said International Student Advisor and one of the models Nitivia Jones. “And it turned out we were trying some of the clothes from the GIESORC closet and a graduate student was taking our picture.”

Jones said the show aims to represent fluid fashion, or fashion that is more non-binary and grants more freedom with gender and sexual identity.

“I feel like it’s expressing yourself and not constraining to male or female, regardless of if you identify with either,” Villafuerte said. “Kind of just seeing what you like, wearing it, and calling it your own.”

Jones said she has never modeled before.

“It was fun to have a semi-professional take my picture and it’s just a fun and inclusive environment,” she said.

Villafuerte and said audiences can expect fashion, performances, and a night that “showcases what fluid fashion has to offer.”