Graduate student shares biographies of students who served in military 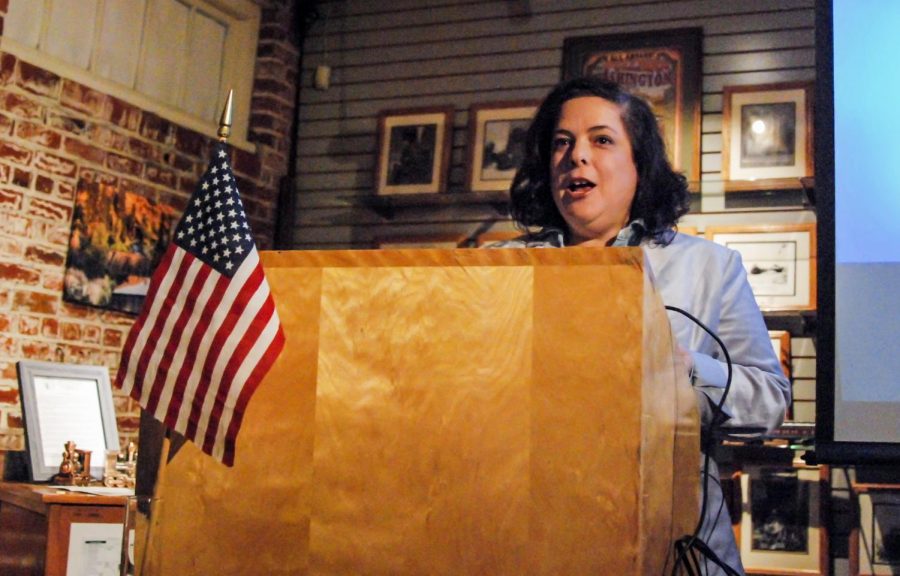 Samantha Edgerton, doctoral graduate student in the deparment of history, gives a speech introducing “The Fallen Cougars” from WWII and acknowledges their accomplishments and the importance of their service on Monday evening at the Pullman Depot Heritage Center.

WSU faculty members and a graduate student collaborated to complete “The Fallen Cougars Project,”  which honors WSU students who served during World War II by sharing their stories Monday at the Pullman Depot Heritage Center.

Ray Sun, associate professor of history and creator of the project, said the Fallen Cougars Project began three years ago in the summer of 2017.

Sun, along with Samantha Edgerton, graduate student of U.S. History, Trevor Bond, director of Manuscripts, Archives and Special Collections, worked together to complete the project.

Sun said he attended the National Teachers Conference sponsored by the Friends of the World War II Memorial in Washington D.C.

Friends of the World War II Memorial required attendees to create a community service project. Sun said he knew about archives holding records of student veterans, so he decided to make it into a project.

Before Samantha Edgerton was a part of the project Sun said he had undergraduate volunteers to put together around 15 biographies.

The presentation given by Samantha Edgerton was the first time The Fallen Cougars Project was shared outside of WSU, he said.

The goal was to create a digital exhibit of the soldiers’ biographies that were accessible to the public, Sun said.

Edgerton, spoke about the lives of Lt. Harry L Cole Jr., Sergeant L. Kenneth Christian, and Lt. Archie Buckley. She said while researching in the summer she decided it would be good to share their stories with the public.

She said she began to work on the biographies in June 2019 and finished them around Aug. 2019.

It was difficult to access information about the soldiers’ lives to establish the details surrounding the battles, she said.

Egerton said her goal was to introduce the three individuals as more than a name on a memorial by telling their stories.