Buying locally not only supports businesses, it can also be sustainable 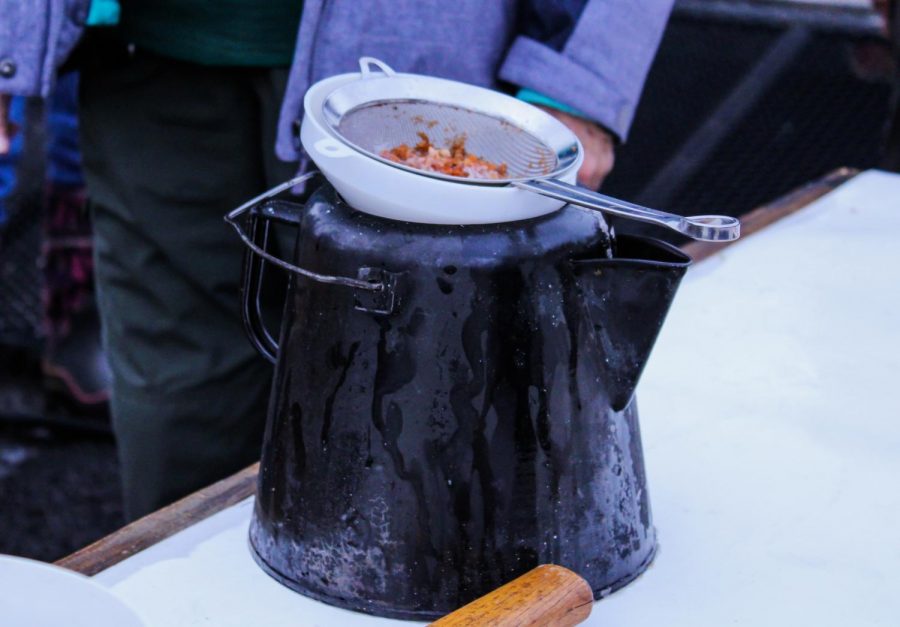 KOOSKIA, ID — Irene Finehout dug through a plastic crate, her fuzzy green hat shielding her from a slight drizzle. In the parking lot of this small town’s volunteer EMT center off the highway, Finehout pulled a handful of shiny apples from the crates and pointed to tiny holes that had formed on their surfaces.

“Don’t grab the ones with the worms,” she said.

Finehout doesn’t use pesticides on her homestead in Kooskia — which explains the worms in her apples. These ones came from Finehout’s back yard to use for the Tahoe Qru, Kooskia’s only EMT center, apple cider-making event. On a gray Saturday morning, Kooskia residents ground hundreds of apples in three cider presses offered by community members.

They filled used milk gallons, apple juice containers, emptied V8 juice jugs and other containers to store the freshly ground cider. All extra chunks of apples were shoveled into bins and then redistributed among the farming attendees so they could feed the apple mash to their livestock, Finehout said.

For Finehout, agricultural life in Kooskia is more sustainable and environmentally friendly than the Southern California organic farm on which she worked for years. As the climate question looms, organic farms and sustainable homesteads have sprouted across the nation.

Norma Staaf, local farmer and freelance writer, said she moved to Kooskia to start her homestead about 30 years ago. She said she wishes a buy-local movement would gain popularity in Kooskia, especially because it seems that everyone in the area already grows their own vegetables and trades with other farmers.

“I just think it would be so good for us to have a harvest dinner or some sort of cooking competition even,” Staaf said. “That encourages people to keep the energy in the community.”

For Ruth May, the 70-year-old innkeeper of Reflections Inn, there’s no need for a farmers market or community harvest dinner. She said that while 607 people live in Kooskia, another 3,000 people live in the outlying area. With neighbors who live close by to offer May almost anything she could need — sugar, an extra generator for the inn, bread, produce — people here don’t need a farmers market.

Finehout said that most people move to Kooskia with a working knowledge of gardening, as many come to run family-owned homesteads and continue the traditions of old. These traditions often don’t include pesticides or electric planters that can overwork the soil, a problem organic techniques have attempted to solve.

Thomas Lamar, the executive director of Palouse-Clearwater Environmental Institute, said he worked in Peru for a few years after he got his master’s degree in environmental science and is no stranger to overworked cropland.

Farming communities he advised in Peru had been pushed aside by large commercial farms in the late 1980s, which poisoned much of the farmland with pesticides. Later, Lamar said he worked in central Washington and saw many of the same problems.

Pesticides popularly used in commercial farming aren’t contained to the farm on which they’re used, Lamar said. He witnessed some farmers have entire yields wiped out from chemicals that had wafted over from corporate farms.

As she spooned a dollop of steaming chili into a plastic cup, Norma Staaf said she used only her own ingredients to make her chili for Kooskia’s high school National Junior Honor Society chapter. This meant grass-fed beef from her husband Nick Hazelbaker’s family-owned meat facility in Idaho — “2 Lazy H Ranch.” It also meant peppers, onions and potatoes from Staaf’s garden.

Lamar said he has noticed a recent movement in people stepping away and reevaluating the way they live, but this is more difficult in larger cities than in rural communities, and he said that there is nearly always pushback from some who don’t necessarily see the value in eco-friendly farming — rural or not.

People should limit the number of miles food takes to get to our homes, Lamar said, and put effort into small acts of eco-friendly eating. Ultimately, he said, people cannot rely on the federal government or current administration to help farmers become more sustainable.

“Your federal government may not be doing anything,” he said, “but get involved, because I guarantee you that your local government is doing something [about sustainability].”

The issues caused by conventional farming are worsened by climate change, Lamar said. However, the words “climate change” tend to cause controversy in Kooskia, May said.

While she’s always been concerned with the environment, May said that she only dedicated herself to all-organic eating after a terrifying bout of cancer. She almost totally avoids pesticides and lets the land do the rest, she said, which can offer more food in terms of yields.

“I mean, I’ve got green beans coming out of my ears at this point,” she said.

However, Finehout said people can become defensive with the obsession around organic farming, an obsession she said was more pronounced in California. The restrictions around what can be defined as organic are too limited, she said.

May said that the discussion around climate change is so political that it can make people avoid environmentally friendly techniques out of spite.

“It’s amazing to me. All this land and resources, and the complete disregard for it,” May said.

Irene Finehout balances a clear milk gallon on her knees to catch the recently pressed apple cider. Those were the last of her apples, she says.

As winter turns much of Kooskia into a frosty forest, some farmers at the cider-making fundraiser said they weren’t worried about the winter, because it’s an easy switch to crops that fit the conditions. Living on a homestead has its benefits, she said.