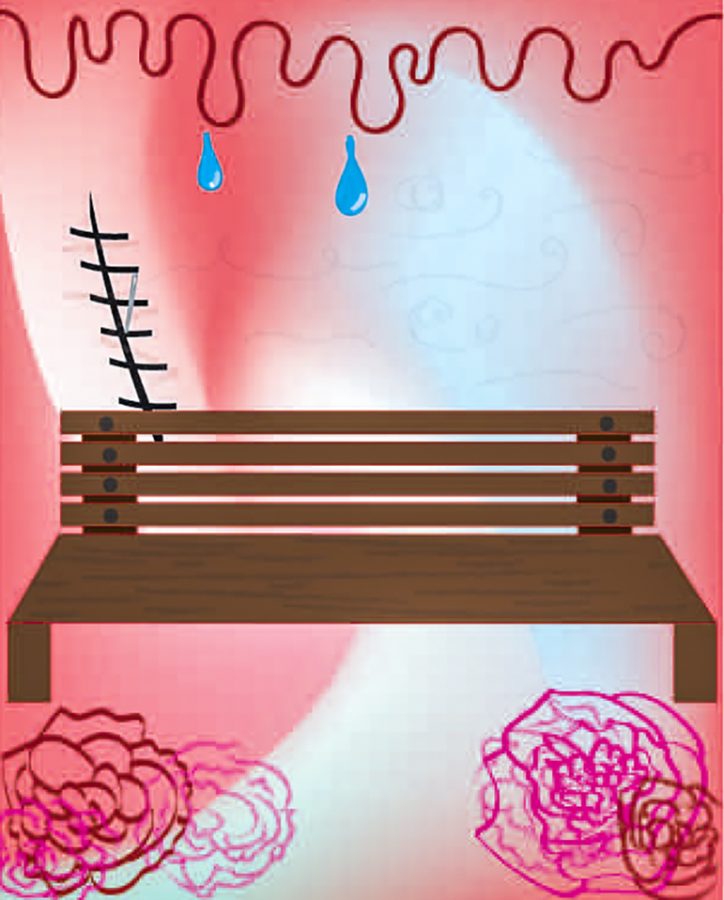 He was the boy who never fought back. Dewdrops condensed on the corners of his eyes while we sat together, even though this was our usual bench at our usual time and we both knew there was no better place in the park to be quiet together. He kept staring at me—at my forehead, the purpling welt, but he met my eyes more than once. He reached out a hand to sweep off the dirt, tucking aside my hair when he did so, his scrutinizing gaze scanning over and over the fresh bruise. When he retreated back to himself, averting his eyes to his own lap, I caught him by the fingers.

“I want to see,” I insisted. My grip was slippery at best, from the blood dripping down his hand, but he only resisted a moment.

I traced up, following liquid crimson, pushing back his sleeve to uncover the seed of it. He said quickly, “It’s nothing.” But a shock of ruby, unfurling in small waves, blooming—much more than nothing. I worried about its depth. They may have thrown a rock at me but they took a knife to him. He should have never been close enough for it but he jumped in front of me, raised his arms. I didn’t see before just how much damage was done. Multiple cuts splintering from one deep slice, seeping steadily. Before I could demand he see a doctor he said the same to me; we made a deal of it, bumping elbows in an ER waiting room until one overworked nurse offered to see us two battered boys. She put ice on my head and snuck a tidy row of stitches through his arm, even after we admitted we couldn’t pay.

From the stitches grew a scar. My best friend, the boy who never fought back, marked forever now. We tried not to tell anyone where it came from—indirectly, this made him elusive and fascinating, but he didn’t pay much attention to his newfound popularity. It was just us against the world, scar or not. But every time I saw it, it seemed viciously liquefied once more. Still bleeding, still boiling. My heart sank whenever it caught my eye. He mentioned once I turned red when I saw it, that I looked at him and then away so fast.

So, I tried to avoid it. Consequently, I avoided him. I still saw that scar everywhere, though, a tree root rupturing against the soil or a rigid cloud formation. I roamed our usual park, veering around our usual bench whenever I saw him there, opting instead for flower gardens. He would never be there, not when everything was a grisly reminder. The buds of crocosmias, swollen and misshapen, which would eventually burst into russet trumpets. Sweet pink bleeding hearts, always split down the middle with those jarringly white petals. Clusters of rhododendrons, vibrantly scarlet, practically spilling from their branches. Erupting, flaming hyacinths. Sometimes tulips, soft cerise or deep crimson. There was one hydrangea bush in the garden, flowering purple, but it was understated and pale when compared to the surrounding lilies, towering ruby and garnet trumpets with dripping, sticky petals.

As the seasons changed so too did the flowers. Chrysanthemums were explosions of tiny droplets, which collected in pools of anemone petals. They bloomed determinedly while the leaves of trees caught fire and flickered out. Not even snows were enough to drive off somber orchids with their brick-dust spots, and gnarled carnations twisted together in uncomfortable pink pulps. I still wandered the gardens and occasionally checked our old bench—he was there less frequently, almost always with books when I saw him—and the opportunities to talk grew less and less frequent. But I couldn’t take them. The sight of him drained me of warmth, or sent tremors down my fingers, or made my heartbeat erratic. What would I even say after all this time? Even if I could bring myself to speak I wouldn’t be able to see him past the scar.

Crocosmia, chrysanthemum, carnation. It was a nauseating cycle. I passed it in that sea of red. I became the man who never fought back, tossed along by the steady floral march of the garden, dazed and disoriented and fumbling along in my old haunts. I yearned for something all the cloying scents of flowers could never provide, something which lay below the dewy petals.

My seemingly endless routine was cut short by stabbing pain and ominous flashing lights. I came to in an ER bed, groggy as if waking from a yearslong sleep. Sterile white all around, until the partition parted and a hand holding a clipboard entered. The forearm supporting it bore a strikingly red rose with thorns coiled all around it. For an ink piece it seemed so organic, curling around the planes of skin seamlessly. The more I stared, tuning out whatever the actual nurse was saying, the more I detected a subtle texture beneath the rose. A hauntingly familiar form, a scar. But I blinked and it was obscured again, buried deep in crimson petals.

He lowered the clipboard. Dewdrops condensed in the corners of his eyes when I threw my arms around his neck. And he—never one to fight back—reciprocated.