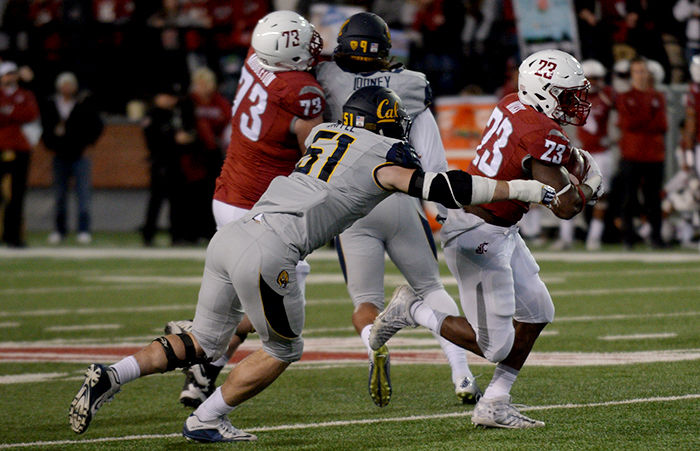 The Cougars rank eighth in the NCAA in total offensive yards per game.

The program’s offensive success through the air garnered a reputation of having teams that cannot move the ball on the ground.

In Leach’s fifth season, redshirt junior running backs Jamal Morrow and Gerard Wicks, and redshirt freshman James Williams have given this year’s team a three-headed monster at the position with multiple games of at least 200 combined rushing yards.

“People can’t just drop eight on us now,” redshirt junior quarterback Luke Falk said. “They have to respect our run game because the boys up front are doing a nice job and the running backs are doing awesome.”

Falk said the option to run the ball more frequently and with greater success has been an important part of the 20th-ranked Cougars overall offensive efficiency and ball control.

The Cougars most recent game against California exemplifies the difference the running game can make for a pass-heavy program like WSU.

Despite being out-gained through the air, a 254-yard performance from the running backs propelled the Cougars past the Golden Bears.

Leach tried to dispel some of the misconceptions about the importance of talented running backs in a pass-heavy offense in Monday’s news conference.

“At the running back position, I’d like to have the most yards,” Leach said. “Yards spend the same whether they’re on the ground or in the air.”

Leach also said that the two teams with the most yardages at the running back position in the Pac-12 this season are WSU and a traditional ground-and-pound Stanford team.

“Our guys have caught the ball a lot,” Leach said. “There are guys that rush for more yards than we do, but if you add on the passing yards, a lot of times we will come out ahead of guys that rush more.”

Leach highlighted the offensive line as a major factor in the surge in production from the running backs. The line has not allowed a sack in the past two games and has nearly cut its total in half from last season.

With an improved offensive line, the running backs spearhead a WSU offense that ranks eighth in the nation in yards per game and points per game, and Wicks, Morrow and Williams all rank in the top-50 in the NCAA in receiving yards among running backs.

WSU’s pass-first offensive reputation is still true, and likely will continue as long as Leach is in charge, but an eight-game winning streak has been enhanced by resurgence on the ground.

WSU heads to Colorado for a game with Pac-12 Championship implications against the 12th-ranked Buffaloes. The game kicks off at 12:30 p.m. on Saturday and will air on FOX.